A major part of the problem is an age-old stigma surrounding suicide and mental illness.

On the frontline of tackling this major public-health problem are a handful of charities and their agency partners, helping to shine a light on the issue and elevating it into the national agenda.

Two charities that lead the way are Samaritans and CALM – the Campaign Against Living Miserably. During the past couple of years, both these org-anisations have launched award-winning campaigns to help raise awareness and drive the public conversation about suicide.

PRWeek talked to some of the creative minds behind these campaigns to find out what it takes to make an effective campaign about such a sensitive subject – and, just as importantly, what practitioners must take care to avoid. In all cases, PR played a critically important role.

Here we profile three campaigns that have made a big difference: 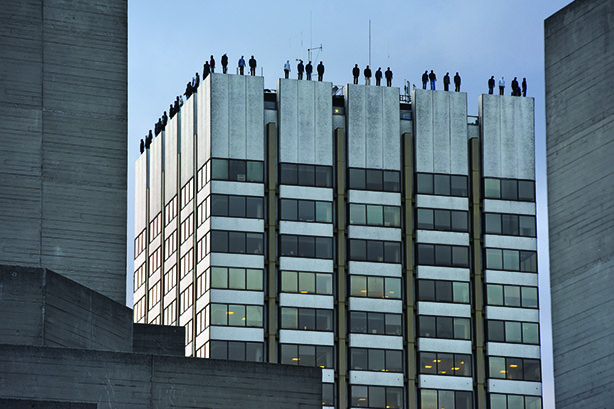 In March 2018, 84 sculptures were installed on the edge of the roof at ITV's headquarters in London, representing the number of men who take their own lives every week in the UK. Each of the male figures represented a real life lost, and were created by that person's loved ones.

Adam & Eve/DDB planning director Will Grundy told PRWeek that the aim of the campaign was to highlight how suicide was not being talked about, despite its impact on so many people's lives.

"Eighty-four men a week was so powerful for us. It's one of those numbers which is utterly shocking, but totally understandable to the human brain," he says. "It's the 'Holy shit!' number, and the statues were the most provocative, incendiary, conversation-worthy way we could get that number out into culture and get people talking about it."

Grundy pays homage to the "bravery, audacity and vision" of CALM to go ahead with the campaign, despite legitimate concerns about a public backlash. "[CALM CEO Simon Gunning] asked us to do something that is so good it's borderline illegal. CALM recognises that skirting around the issue is exactly why it is as bad as it is today," Grundy adds. "We knew [some] people would be offended, but the issue is an offensive one – you should be angry and upset and want things to change."

The next step was to find a suitable location to bring the concept to life.

ITV's Thames-side South Bank building allowed the installation to "stand imperiously against the London skyline so that the statues could be as uncomfortable as they needed to be".

As a media partner, ITV also provided millions of eyeballs-worth of exposure via daytime show This Morning – with several days of programming keeping it in the limelight.

Setting up larger-than-life-sized sculptures on a tall building provides rigging challenges, but in this case there were even greater risks. "We had to be careful… as statues on a building can be immensely triggering for people in similar situations," Grundy says. "It needed to be very clear that this was an installation.

"The 84 statues had to be perceived as art, rather than men about to take their own lives. We needed a PR plan in and around that."

Adam & Eve/DDB business director Chris Jackson says he experienced an immense feeling of unity when the statues went up. "It was a very different relationship than 84 men about to jump; it felt quite strong and stoic – a real sense of solidarity and defiance."

Just as important as the optics is the meaning behind each sculpture. Designed by artist Mark Jenkins, each was built with the help of loved ones of a man it represented. This provided a deeper meaning and authenticity that is vital when tackling a sensitive subject.

"The worst thing we could have done was upset or offend people who had that tragedy in their lives," Grundy says. "It would have felt disingenuous to just make random statues.

"The research shows if you have had a family member take their own life you are at much higher risk, to the tune of 24 times more likely to take your life yourself. That group of people weighed heavily on our minds the whole time."

Hawley tells PRWeek getting the buy-in from these loved ones gave the campaign more depth and humanity. "When ITV made it possible to go on This Morning, we knew we had the ability to flex that data visualisation from one end of the campaign through to really deep and meaningful, interactional stories that brought it to life," he says. "W Communications was instrumental in keeping that fire burning and more stories being sold into national press and a variety of different media."

The work created 1.3 billion organic impressions with zero media budget. Project 84 generated the biggest Google search figures around suicide in history – three times greater than anything before. The efforts of Project 84 led to Prime Minister Theresa May appointing a minister for suicide prevention.

But perhaps the greatest evidence of success is that in 2017, CALM helped to prevent 427 at-high-risk individuals from taking their own lives. By the end of November 2018, that number had risen by 18 per cent to 504. 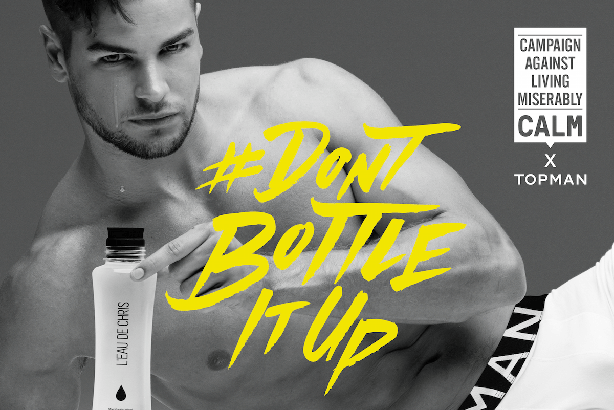 Love Island star Chris Hughes caused a stir on social media in the lead-up to World Mental Health Day, in October 2017, by appearing to launch his own 'tear-infused' mineral water, L'Eau de Chris, in a video that went viral.

At a press conference on World Mental Health Day, it was revealed the product launch had in fact been a stunt used as a platform to launch the #DontBottleItUp campaign for mental-health charity CALM, discouraging young men from keeping their emotions bottled up.

How did CALM enlist the help of a reality TV star, and why? Topman, which had previously worked with the charity, wanted to do more work with it and snapped up Hughes right after he finished Love Island. The retailer provided its brand, scale and some funding; Hughes and his social-media network, with two million Instagram followers, provided a platform.

CALM marketing director Ben Hawley tells PRWeek one of the aims of the campaign was to reach a younger demographic than usual.

"They're on Instagram and not necessarily reading The Guardian," he says. "We wanted to build fame for CALM using Topman and Chris to start a conversation around mental health and masculinity.

"Chris had struggled with anxiety and wanted to do something about it. He was known for airing his emotions on the show."

Calm asked creative agency BMD and W Communication to create a video and generate a buzz.

W director Grace Henwood says: "We worked with Chris and Topman to create the mineral water. Chris was known on Love Island for being very open about his emotions and expressing how he felt, and we allowed that story to permeate for 24 hours the day before World Mental Health Day."

The 'launch' generated plenty of talk about 'celebrity culture gone mad', which only served to underline the absurdity of suicide being a taboo subject when it is the biggest killer of men under 45.

Mental health awareness: we all need to know we're not alone in the struggle 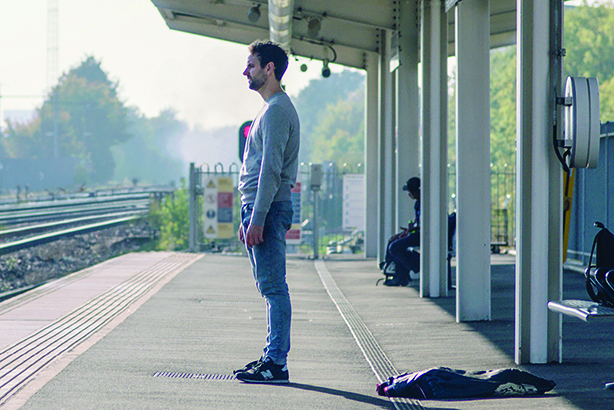 Samaritans and the rail industry joined forces for the 'Small talk saves lives' campaign, which is aimed at passengers and the general public.

The campaign, featuring a short film telling the true story of someone who tried to take their own life, was launched on BBC Breakfast, with seeding across social media and the digital channels of Network Rail, Samaritans and British Transport Police.

Pegasus art director Adam Hayes tells PRWeek that most of the previous communication about suicide support had focused directly on people at high risk.

"This brief was to reduce suicide on the railways by moving members of the public from being bystanders to standing by. Using our strategic planning framework CHANGE, we 'diagnosed' the barriers that might prevent travellers from intervening," he says.

Often, bystanders do not have either the confidence or knowhow to help strangers who may be distressed. This campaign encouraged people to use simple tactics like throwaway comments to strangers about the weather to distract someone from their suicidal thoughts.

The first film reached more than 16 million viewers, and formed the foundation of an integrated campaign that includes a second film, social-media activity, out-of-home advertising and a very successful media push.

"Encouragingly, 49 per cent of those who saw the campaign said it would increase or reinforce their intent to act if they notice someone in distress and, most importantly, we have had reports from Network Rail of lives being saved thanks to the campaign’s advice," Hayes says.

The clients allowed Pegasus to be very direct with language and even use the phrase 'suicidal thoughts' in messaging for the first time.

An important lesson, adds Pegasus head of copy Ian Ray, is not to "yank too hard at the heartstrings". "It's often tempting to think in terms of big, heart-rending stories, but the real interventions we heard about were much more nuanced experiences," he says. "We were keen to carry this into our creative, and these real case studies were at the centre of the comms campaign. The most recent film is deliberately everyday, which makes the emotional punch of this experience feel very real."