Greggs looked to cash in on Veganuary by launching a vegan version of its most popular product – the sausage roll – of which it already sells 1.5 million per week.

It rolled out the pastry snack in about half of its 1,850 stores, with the products selling out a break-neck speed.

First there was an 'accidentally leaked' email teasing the launch and then a clever outreach to journalists, sending them vegan sausage rolls in mock Apple iPhone packaging. 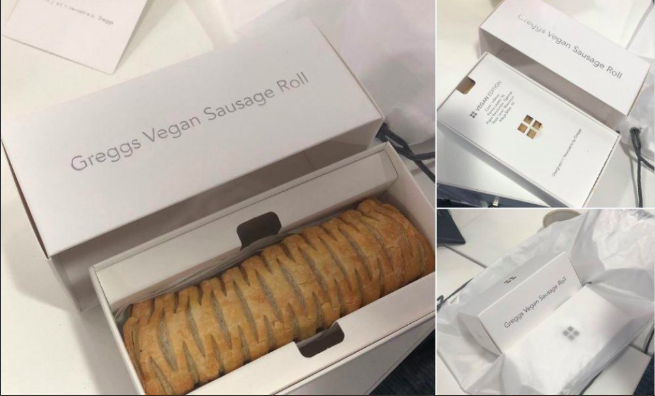 This was capped off by a savvy social media campaign that made light work of carnivorous Twitter trolls.

The one who gave the campaign its biggest push was ITV breakfast show host Piers Morgan. He slammed the product on Twitter, initially saying: "Nobody was waiting for a vegan bloody sausage, you PC-ravaged clowns." Greggs' witty response hit the spot for more than 140,000 Twitter users.

This sparked a row that lasted throughout the day and involved other celebrities, including David Baddiel. In fact, #greggsvegansausageroll was the top trending hashtag in the UK yesterday.

It wasn't long before other fast food chains got in on the act, including Pizza Hut and McDonald’s – which launched its own meat-free product this week.

Like our pals at the sausage roll place, we’ve been expecting you. Don’t worry Piers, you can still get McNuggets in your Happy Meal! ??

In terms of coverage, the launch video on Twitter had been viewed 4.74 million times and shared nearly 8,000 times. The launch got traction in most major national media outlets including Sky News, the Evening Standard, the Guardian and Vice, which ran a review of the pastry treat.

It also follows recents successful campaigns where Greggs created a limited-edition advent calendar in November 2017, and turned some of its shops into candelit dinner restaurants last Valentine's Day.

"This isn’t just about a sausage roll. This is the democratisation of vegan food. Greggs has laid down the gauntlet to the hipster joints who have, for too long, got away with charging eye-watering prices for exotic-sounding seitan, soya and jackfruit delicacies. Vegan food has, quite rightly, been criticised for coming across as out of reach to ‘joe public’. Knowing this, Greggs has tackled the three major challenges people report when trying to eat more plant-based food: accessibility, price and convenience. Greggs is on every high street in the UK and at £1 its sausage roll is inexpensive compared to most vegan food, or any food for that matter. The fact that Greggs has launched it using a brilliant parody of iPhone wielding, flat-white swigging liberals (like me) who have typically characterised vegan culture is the icing on the cake. Sadly, I went to Greggs earlier to get one and they'd sold out, at 12:57."

"Nothing says great PR like a new year’s day sell-in. Fuck, too much. I hate the fact that I love it as much as a cheese-and-bean melt. Its twitter response to Morgan and other twitter trolls is epic. The simple fact is that nobody would normally talk about Greggs in Jan and now everyone, including me, is talking about it, is a coup. What can I say, I love a sausage."

"This is a classic example of the fact that a great PR campaign starts with a great idea. The PR and social roll-out has been second to bun. From the ‘accidental’ leaked email at the back end of last year, to the Apple-style packaging issued to media and influencers, to the snigger-inducing responses from Greggs on social media – the vegan sausage roll launch has been anything but Quorny. The lucky bake in the campaign took the shape of intervention from the one-and-only Piers Morgan. His tweet provided the Greggs’ team with a money-can’t-buy opportunity which they pig-gy backed on beautifully, creating even more layers of exposure for the vegan sausage roll. The bakery’s transformation in recent years has been nothing short of astounding. From falling sales and a brand reputation that couldn’t get any greasier, to winning over the nation and becoming a piece of business that the PR industry covets. I can’t wait to see what Greggs will roll out next."

"Like every other bearded fool in Shoreditch, I’m actually doing Veganuary. Well, I’m allowing myself eggs, which I guess is the vegan equivalent of Dry January except for all the Stella. Vegan or not, you might think launching a carb-heavy pastry product in January is commercial suicide; however, the relentless coverage Splendid and Havas have generated perhaps suggests the contrary. Most importantly, this isn’t just another fake PR trial idea that only rolls out in a single branch. Instead, it’s apparently dropping in 950 stores. Here’s hoping it’s still on the shelves of Greggs in February after the vegan feeding frenzy has abated."

"In our industry bubble, it's been widely praised as a social triumph, but to me, it's more complicated than that and has flipped traditional PR strategy on its head. See, for a brand like Greggs, Twitter probably isn't where most of its customers are, but it's a perfect media relations tool. So, while the social post itself didn't directly reach the everyday sausage fan, the tweets humoured enough media folk to earn tabloid coverage the next day. It was a masterful indirect campaign."

"With a little – and somewhat hysterical - help from Piers Morgan and other commentators who were quick to pounce on the new product as a symptom of political correctness gone mad (one can only wonder, as David Baddiel wittily surmised, that they had wrongly assumed that the meat ones were being discontinued), the vegan sausage roll quickly became the conversation of choice. Mainstream media coverage and a quick look at Google Trends shows that this was reflected in ‘real-world’ interest, with a spike in searches for Greggs and related topics through yesterday."

"Through lead social agency Splendid, Greggs has hit right back at the weird though no-doubt expected response of the ‘world’s gone mad!’ gang, with one of my favourite murdered-by-words in ages – ‘it’s a vegan sausage roll Damon’. I wouldn’t be surprised if it was a pre-approved response, to be honest, ready to be shot back. Combine this with the brilliant media relations work done by Havas – sending the vegan sausage rolls to confused journalists in an iPhone-inspired case was a masterstroke, aligned as it was with an Apple style social ad – and it’s a very slick and impressive creative launch, especially against today’s vegetarian Happy Meal launch by McDonald’s, which has got a load of coverage but none of the buzz."

"Piers Morgan is the wurst. Greggs are clearly on a roll."