Jacqueline Parkes, CMO of Viacom’s MTV, VH1, CMT, and Logo TV, and EVP of digital studios, says while MTV has a lot of "nostalgia content," the network is more focused on the "young and young at heart," specifically, 18- to 34-year-olds. The brand’s mission is to amplify and champion the voices of youth. "Every generation deserves its own MTV," she adds.

MTV is currently ramping up its digital originals for its Generation Z audience, whom Parkes describes as naturally born curators.

"Gen Z is the first generation that swiped before they wiped," she quips.

As part of its efforts to capture Gen Z’s attention, Viacom’s MTV Digital Studios brought on Lars Silberbauer as SVP in October. He is the former Lego exec credited with the social media strategy that lifted the global visibility of the Danish toy brand.

"He came over to lead our digital creation," notes Parkes. "Our focus is developing new intellectual property for digital that continues to fuel the pipeline for our fans."

Recent MTV digital shows that have been successful include Cooking in the Crib with Snooki & Joey and Basic to Bougie.

The social and digital teams behind MTV, VH1, and Logo TV are always "on the front" of everything new that is evolving, Parkes explains.

"We are constantly looking to be first to market and create innovative ways our fans can engage with our content," she says.

In March, the social team at VH1 launched Sissy That Bot, a Facebook Messenger bot that debuted on the same day as season 10 of RuPaul’s Drag Race.

Additionally, MTV announced nominations for this year’s Video Music Awards on IGTV, Instagram’s long-form video hub that launched in June. The network also partnered with Amazon to allow fans to cast their vote for VMA artist of the year using Alexa.

Next spring, MTV is bringing back three new editions of legendary reality series Real World, set in the U.S., Mexico, and Thailand, on Facebook Watch. MTV also has several new shows coming out on Snapchat.

We are constantly looking to be first to market and create innovative ways our fans can engage with our content.

"We fueled fans’ passion and are delivering on that by creating original content that we are publishing on all of these platforms," says Parkes. "Some people are like, ‘Is it cable? Is it social and digital? Does it cannibalize?’ We don’t think so. For us, it is not an ‘either’ — it’s all about more.

A major challenge any CMO has to contend with is that consumers have more content than ever before on every platform.

"You need to give them a reason to pick your content," says Parkes.

"We have a treasure trove of intellectual property, so we are tapping into that to elicit the emotions we know are essential to the engagement we are looking for."

As CMO, a chunk of Parkes’ time is spent analyzing consumer behaviors and how MTV, VH1, and Logo TV can engage them.

"We continue to see consumer connections around fandoms," she notes. 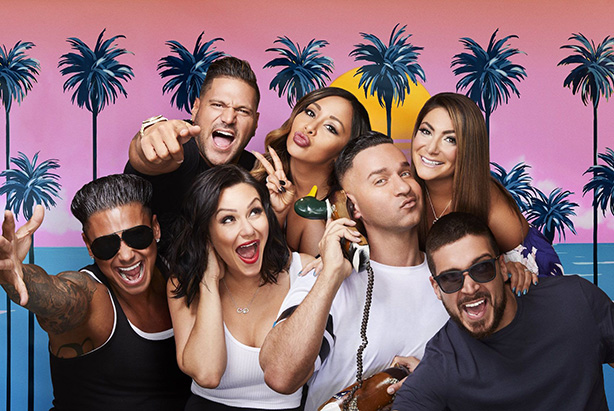 MTV’s Jersey Shore and RuPaul’s Drag Race, and VH1’s Love & Hip Hop are regularly top trending topics on social media. Parkes explains it is her job to harness the power of those fandoms to make sure the networks are giving the fans what they want.

"[We need] to create new original content around those fandoms that enables our fans to engage in ways they never thought possible," she says. "So you will see us be a lot more experiential and make sure there are touchpoints for consumers in every facet of their lives."

The channel is bringing back its popular 1990s show Spring Break next year and also purchased the SnowGlobe Music Festival in South Lake Tahoe, California, where it will present its New Year’s Eve programming.

"That is what separates MTV’s events from others," notes Parkes. "We have always been a part of youths’ lives at important times."

MTV, VH1, and Logo TV at their core have always been about championing social issues and social change.

That’s what drew Parkes to the company in 2016, following a 20-year stint heading marketing for Major League Baseball.

MTV recently worked on getting people out to vote during the 2018 midterm elections with its campaign +1 the Vote.

"The tag for the campaign was voting with a friend counts a little bit more," says Parkes. "It ran across all platforms. We had interactive maps telling people voting registration deadlines and information on who is running."

MTV also threw over 100 parties at the polls to get people excited about voting and held a midterm election after-party the same night at Miami Dade College’s Kendall campus, cohosted by radio personality Charlamagne Tha God.

"This is all to champion what we know is important to youth, which is getting out and voting," explains Parkes. "The only way we can create change is if we get out there and vote."

Earlier this year, on National School Walkout day, held in response to the murder of 17 Marjory Stoneman Douglas High School students in Parkland, Florida, Viacom went dark on every platform for 17 minutes to honor the lives lost.

"It was done to have purpose and create attention for the cause," notes Parkes. "This was MTV and Viacom taking a stand against gun violence."

MTV is partnering with March for Our Lives in 2019, she says. Details were not disclosed.

"We partner with our social impact team and are at the forefront of creating change with people who are doing positive things in the world," explains Parkes. "We are aggressively getting into the causes that are important to our consumers and important to us as a brand."