An underlying theme in many of the campaigns is for people to take more responsibility for their own health and wellbeing.

Advent calendars are a popular feature used in social media campaigns, often highlighting the work of ambulance services through brief case studies of their staff.

Here, PRWeek reveals some of the latest Christmas campaigns from ambulance services in the run-up to one of their busiest times of the year.

Think Before You Call 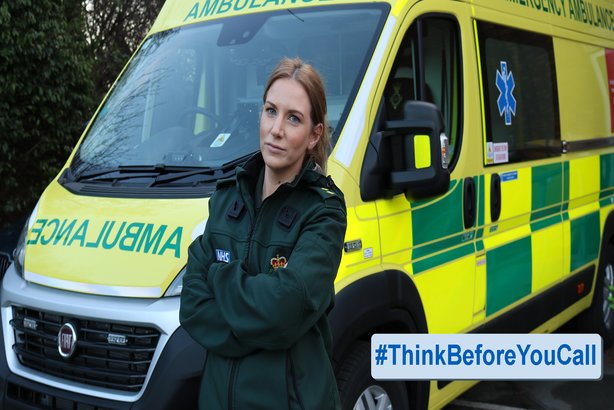 Extreme examples of genuine reasons for calling an ambulance, such as someone suffering a heart attack, a toddler choking to death, or someone seriously injured in a car crash, feature in a new campaign to reduce needless 999 calls.

They are contrasted with people calling ambulances because they are drunk, have spotted an injured animal, or have a sore knee.

The different scenarios feature in three short films being promoted on social media as part of the 'Think Before You Call' campaign, which aims to raise awareness of the correct use of the emergency ambulance service and reduce the number of inappropriate calls.

For anything else, people should consider other options such as seeing their GP, visiting an urgent care or walk-in centre, or calling NHS 111.

Nick Smith, executive director of operations for Yorkshire Ambulance Service, said: "We have chosen hard-hitting examples for our campaign this year because it’s vital that people understand when to call 999 and when another NHS service is more appropriate." 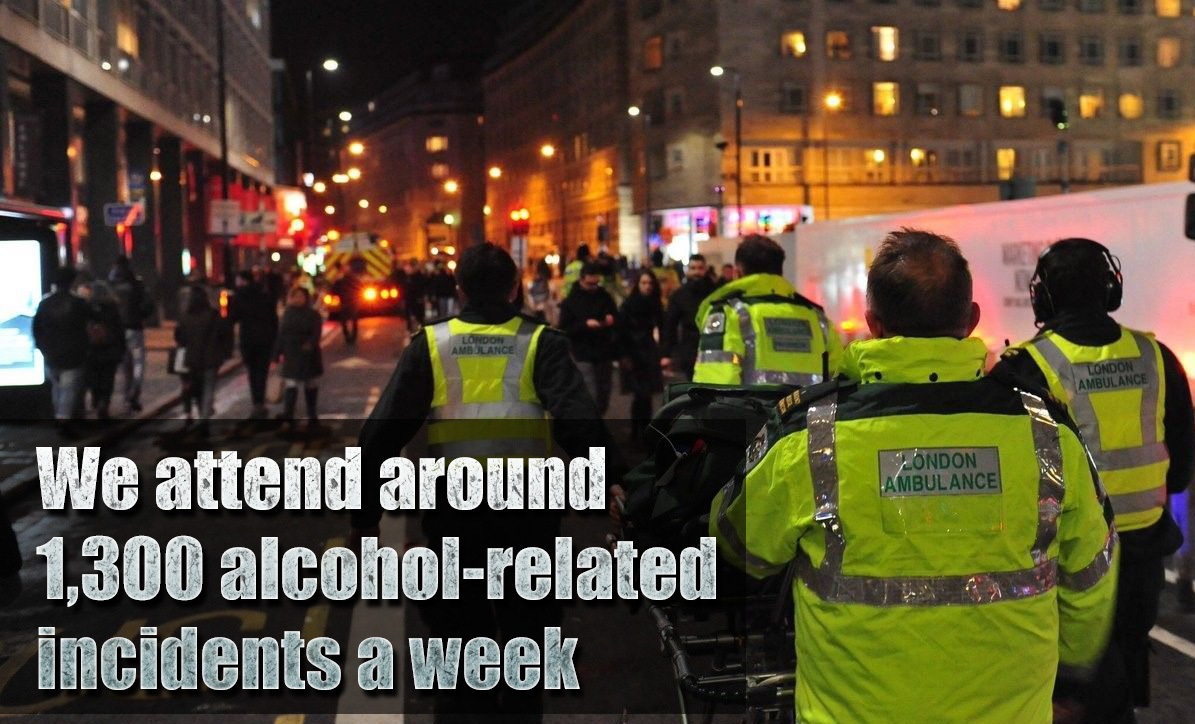 Highlighting Christmas as one of their busiest times of the year, and that people should only call 999 in a genuine emergency, are among the key messages being promoted in the coming weeks.

Others include the fact that every time an ambulance crew responds to an alcohol-related call means they cannot help another patient who might be seriously ill or injured. Many drunk people don’t need an ambulance, they just need their friends to get them home safely and help them sober up, according to the service. 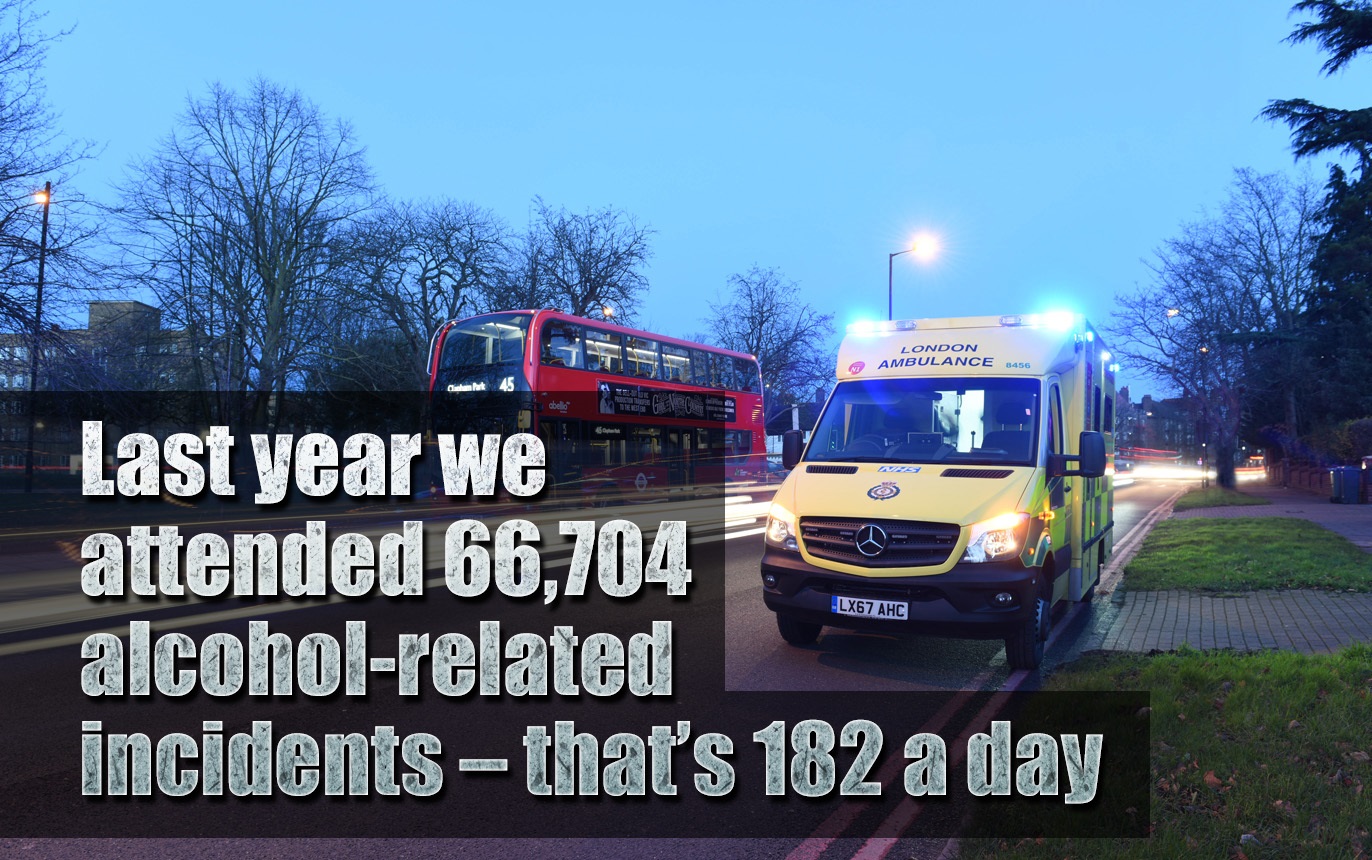 It is calling on people to take greater care of themselves when they are out drinking and is promoting tips to help, such as eating before drinking, pacing yourself, looking after others you are with, and planning your journey home in advance.

We will be busy tonight, as with most Fridays. We expect to receive lots of calls relating to alcohol.

Please take a look through our Moment below about 'Mad Friday' and share with your followers. ??https://t.co/zOR4DceH5R

The focus is on the 18-35 age group and London Ambulance Service has worked with a number of mainstream media outlets, including BBC London, ITV London and LBC, to share safe drinking messages.

It is also promoting its messages across social media channels including Facebook and Twitter, as well as using Instagram Stories to target a slightly younger audience. 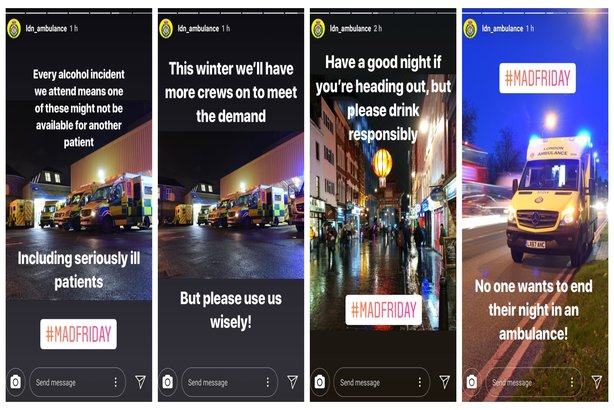 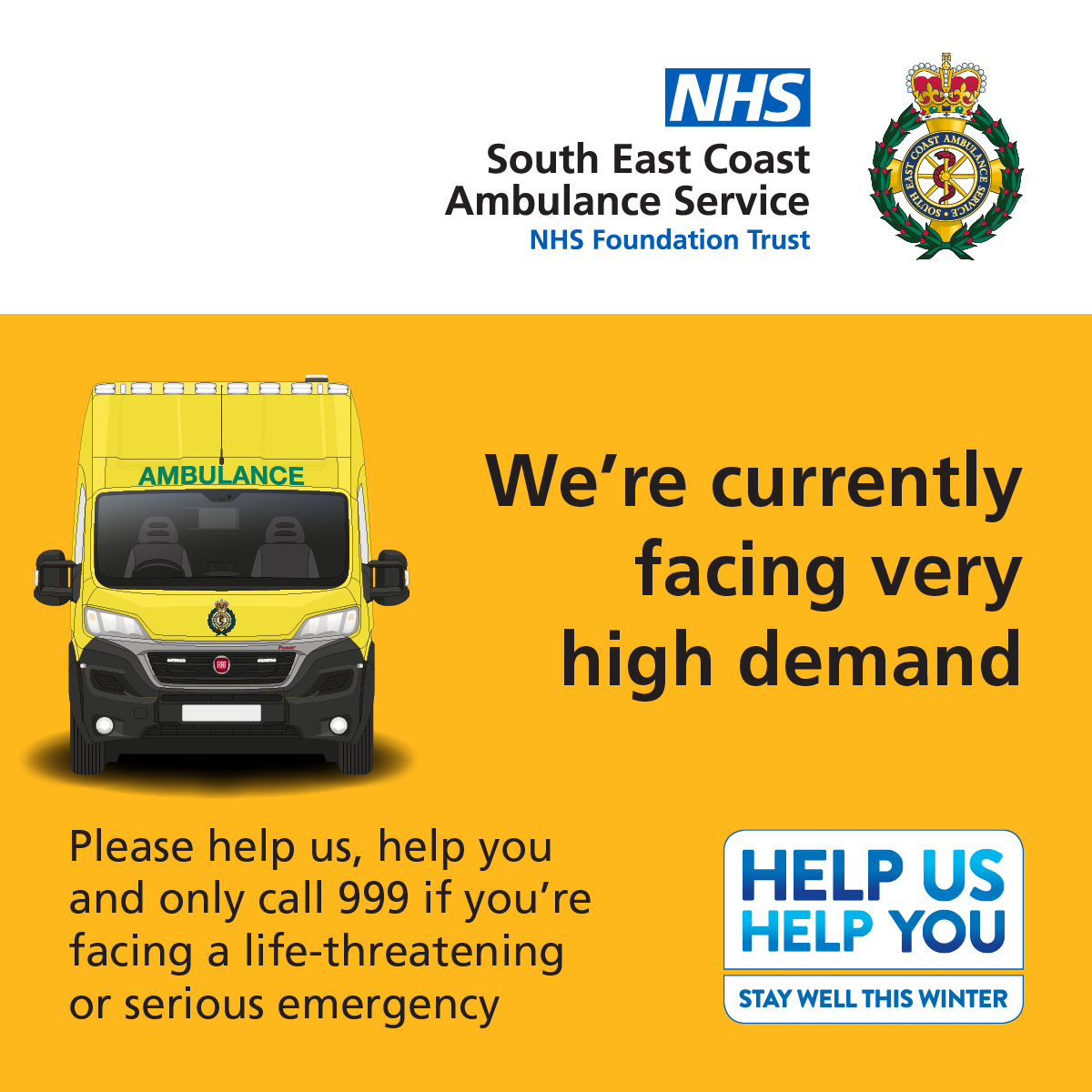 South East Coast Ambulance Service (SECA) is using the Help Us Help You winter campaign devised by NHS England and Public Health England, which is encouraging people to take more responsibility for their health and wellbeing.

It is focusing on using visuals to increase shares on social media, and a 'choices' graphic has been particularly successful - with a reach of around 400,000 to date. 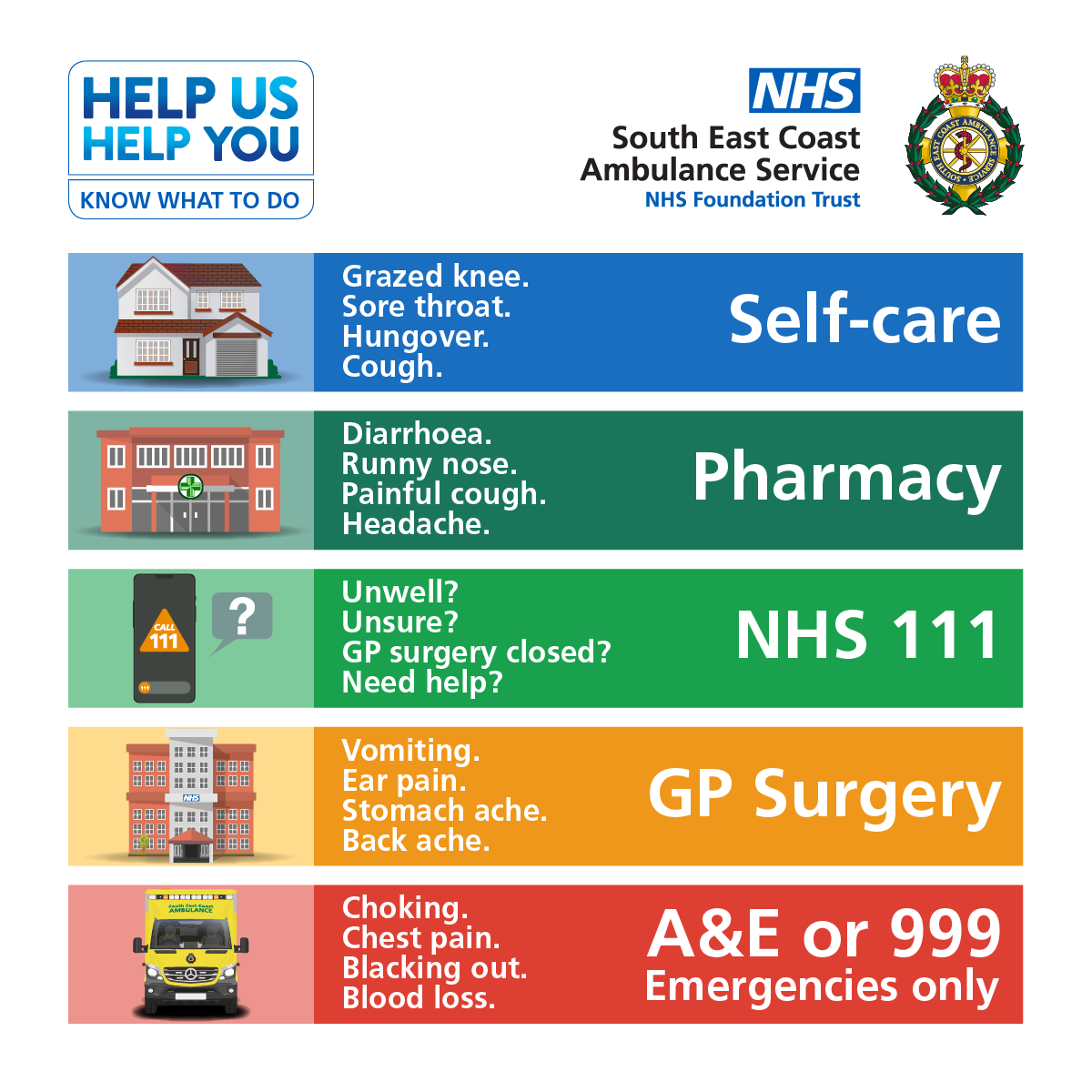 SECA has also produced an advent calendar, being promoted on social media, to explain more about the work that it does and introduce some of its staff to the public.

Our dispatchers allocate calls to our road crews and must be experts at multi-tasking. #SECAmbAdventCalendar2018 pic.twitter.com/n28ph04Jv6


And it is issuing advice through a ‘Christmas wish list’ - with key messages being that people should plan ahead for any nights out, look out for others, not drink alcohol to excess, and have fun but be sensible.

Other tips include asking people to make sure they have stocked up on commonly used medicines, ordered any repeat prescriptions they need, and make sure they don’t serve up undercooked turkey and other foods which can cause salmonella poisoning. 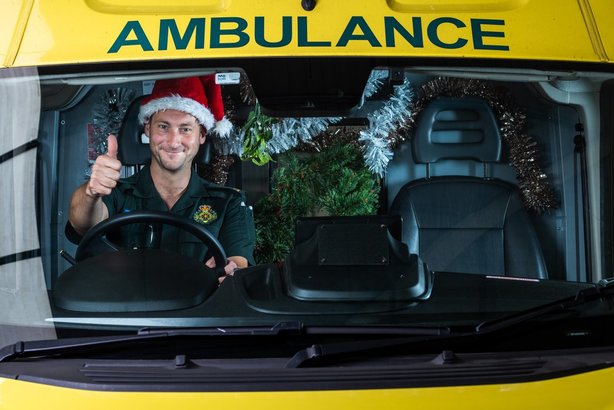 There have been more than 13,000 views of a student paramedic programme, with almost a thousand people in the process of applying for a place, prompted by a recruitment campaign running until Christmas Eve.

One week tonight, applications close for our student paramedic vacancies. Want the best Christmas present ever? Then it's time to get your application sorted and submitted to us. Don't leave it too late....you won't regret it! @wmaslouharris https://t.co/4sw8xw6eKw pic.twitter.com/0a7YASY4Bj


An advent calendar is being used to release information about the programme, which is an ‘earn as you learn’ scheme, as well as advice on how to fill in the application form and an insight into the selection process.

West Midlands Ambulance Service (WMAS) is promoting the scheme across its Twitter, Facebook and Instagram accounts, with the campaign being led by recruitment manager Louise Harris. She posts the daily updates, which are then shared on the main WMAS accounts.

#Day16 As a trainee & as a registered professional you will be required to build, develop & maintain a portfolio. The standards required will differ at each stage but you will be guided by our Training Officers, your mentors & our university colleagues on how to meet these pic.twitter.com/tlJGWl10r3

In a departure from the traditional safety messages it has put out in recent years, in the weeks before Christmas, WMAS is also highlighting the equipment and skills used by its staff, with a second festive campaign.

A social media campaign based around a WMAS advent calendar is using short videos to show particular pieces of equipment carried in an ambulance, what they do and what they’re used for.

When we opened door number 17 of #UnwrappingTheAmbulance advent calendar we found Jowaiting for us! To see which part of an ambulance she had to tell us about today, click below. pic.twitter.com/EfaHMlNRP3

It aims to tackle the myth that ambulance crews only give basic first aid before taking a patient to hospital, with the key messages that crews have a broad range of skills, use a wide variety of equipment and can administer a number of drugs to provide vital treatment.

Its December 1st! Which means we are starting our #WMASAdventCalendar This years theme is #UnwrappingTheAmbulance showing all the different Kit and Equipment our staff have with them on the ambulance. Behind door 1 is... Rob showing us the Basic Life Support Bag ?????????? pic.twitter.com/ZZvxoKbNvf