Every August, hundreds of thousands of people flood the small city of Canton, Ohio, during the Pro Football Hall of Fame Enshrinement Week, more than doubling its population of 70,909.

The task of fulfilling their expectations falls on the shoulders of Johnson Controls, a building management company that provides products and services for HVAC, fire and security, lighting, and other building controls.

While not a consumer-facing brand, Johnson Controls’ visibility grew astronomically when the Cork, Ireland-based company signed an 18-year deal reportedly worth more than $100 million with the Pro Football Hall of Fame.

The company was given naming rights for the village, its virtual reality attraction, and the enshrinement week. And it would provide its tech to the village with promises of a Disney World experience.

"We believe this will be a destination place," says Johnson Controls CEO George Oliver. "If you look at its vision and the values it represents, it is a great platform to build from."

However, Johnson Controls has grander designs for the $899 million village, positioning it as the first "smart city" for sports and entertainment, complete with a stadium, hotel, convention center, retail space, and more. The village infuses data into its building controls systems to drive cost-energy efficiencies by better managing lighting, heating, and other amenities.

The idea is to converge all the numerous disparate systems, as well as their devices and sensors, onto a common platform to increase the facility’s functionality, Oliver explains. After that, the company creates a "digital vault" to collect the data users can access to create apps to "enhance comfort at the individual level." In another example, the company’s retail clients can use their tech to monitor foot traffic in their locations. Measuring foot traffic against sales gives them a much better idea of how effective their marketing efforts are and how their sales correlate to inventory movement. "That’s the power of creating a smart building fueled by one platform," Oliver notes.

Johnson Controls was also tasked with renovations for the Pro Football Hall of Fame Museum, installing temperature controls and other measures to help preserve documents and other materials in its archives, explains Fraser Engerman, the company’s director of global media relations.

It is the first sports museum accredited by the American Alliance of Museums, he adds.

There are also significant economic incentives to build this smart city. The largest project under construction in Ohio currently, the village could drive millions of tourists per year, generating as much as $15.3 billion for Stark County, according to the Pro Football Hall of Fame. 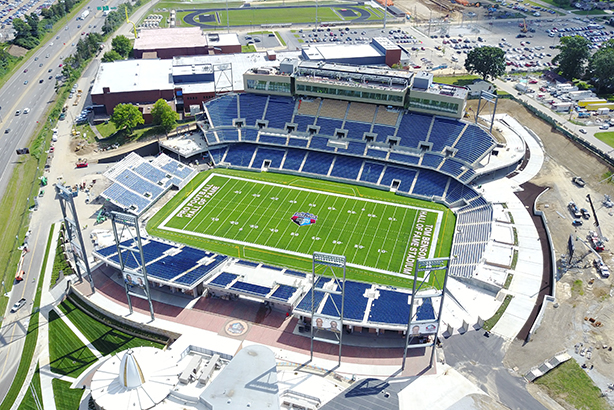 Engerman says the village will host a litany of activations, "from concerts and corporate events, to college and high school football and soccer tournaments, to potentially the NFL Draft."

Oliver adds the village has generated interest in Johnson Controls as a potential building controls partner for "dozens" of new projects across various verticals. "As we establish and demonstrate what we can actually do and how we can work with customers to achieve their vision, it’s changing how we engage from a commercial standpoint," he explains.

Engerman notes the company is in talks with "a number of NFL teams as well as other sports ownerships groups" worldwide. "The technology integration at the hall of fame is also attracting other vertical market customers such as hospitals and schools."

Engerman declines to name these potential partners because the agreements haven’t been signed yet. "For the hall of fame and Johnson Controls, this partnership aligns to [the former’s] mission, vision, and values of honoring the past and building a future driven by innovation," he says.

The company works with Ketchum as its U.S. AOR and smaller agencies for trade and regional publications.

A wave of mass shootings in 2017 and 2018 has caused Johnson Controls to re-examine its security solutions. Oliver says the company is focusing on being "much more proactive instead of reactive."

Earlier this year, the airport chose the Guardian Indoor Active Shooter Detection System to protect travelers and staff in its terminal. Johnson Controls installed and maintained the system.

It’s the first time an airport has installed gunshot detection for a public passenger terminal, Shooter Detection Systems said in a statement. "We’ll focus on preventing a shooting instead of responding to one," Oliver explains. "We hope to work with other partners and startups, making sure as we assess the problems that we’re positioned to continue to invest and drive innovation and enhance solutions."

Johnson Controls has also partnered with Everbridge and Databuoy for other projects.

Oliver became CEO of Johnson Controls in 2017 at a time of great change. He joined from Tyco, where he was CEO, after the companies merged in 2016.

During that period, Oliver helped lead the integration of the two businesses as president and COO of Johnson Controls.

The merger combined Tyco’s leadership in fire and security solutions and Johnson Controls’ expertise in energy efficiency under the same roof. But it also moved the latter’s headquarters to the tax haven of Cork, Ireland, saving it $150 million every year.

It's [about] driving innovation, continuing our technology leadership, and building high-performance teams globally that enable us to lead in the spaces we compete in.

That repositioning as a building management company prompted Johnson Controls to spin off its $16.2 billion automotive seating business, now called Adient. Its CEO is Douglas DelGrosso.

In November, Johnson Controls agreed to sell its car battery business, Power Solutions, to Brookfield Asset Management for $13.2 billion, making it one of the largest leveraged buyouts of 2018, according to Bloomberg. Once the sale is complete, the company will be a pure play building tech and a solutions provider, says Engerman.

For Oliver, the takeaway is simple: "In both businesses it’s [about] driving innovation, continuing our technology leadership, and building high-performance teams globally that enable us to lead in the spaces we compete in."