The Whitehouse Consultancy founder, Chris Whitehouse, has threatened to leave the self-regulatory body over what he described as the "wholly inappropriate" use of the social-media channel.

Whitehouse took exception to a Public Affairs Board (PAB) tweet about a new appointment at rival firm Hanover yesterday (see chain below).

In response, Whitehouse tweeted that "this commercial promotion of one member company is inappropriate and unacceptable", adding that he wanted the person who sent the tweet "removed immediately".

PRCA director-general Francis Ingham responded by saying the channel is used to retweet news, before the conversation escalated, ending in Ingham blocking Whitehouse on Twitter and Whitehouse posting a doctored picture of Ingham with a bell around his neck. 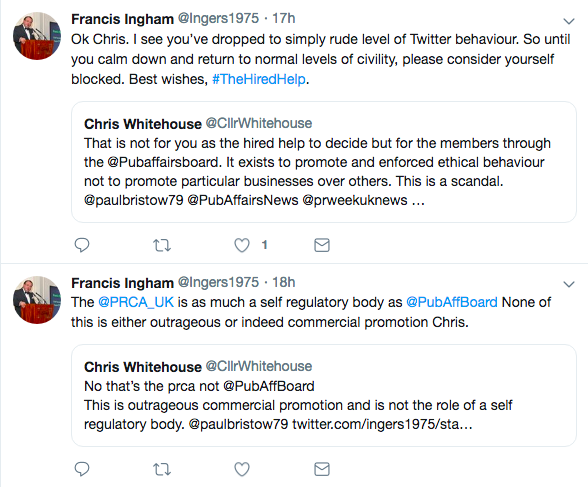 Whitehouse told PRWeek: "It seems to me the PRCA has already reneged on the most fundamental commitment it gave during the merger discussions at the APPC – that the Public Affairs Board chair would be the spokesperson on matters directly relating to political consultants because that was the right way of getting clarity on who represented the sector.

"Many members who voted for the merger voted purely because they were given that assurance. They weren’t happy with the way that Francis Ingham had previously spoken out on issues in a way that wasn’t consistent with the APPC’s position."

In a letter addressed to PAB chair Paul Bristow, he warned: "The Whitehouse Consultancy cannot in good faith continue to remain a member of the PRCA unless and until this unacceptable development, contrary to all assurances given during the discussions on merger, is addressed."

"I have no idea what the APPC Twitter account used to do, but both myself and the chairman of the Public Affairs Board, Paul Bristow, are very clear it’s absolutely appropriate," he told PRWeek.

"We are both a little surprised that just one of the 135 Public Affairs Board corporate members has an issue with this and we are sure that on reflection Chris will realise he is in a minority."

Ingham said that when he first saw Whitehouse’s tweet, he "kinda shrugged".

"I think in the cold light of day, hopefully he will look at it and go: 'Oh, that was a bit silly,'" he added. 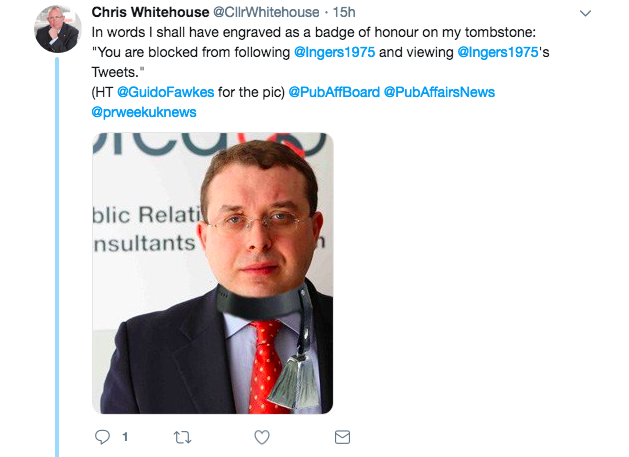 Ingham described a doctored image of himself with a leper bell around his neck, posted by Whitehouse, as "a bit over the top".

"We can expect better basic civility within our industry, we have enough critics outside of it," he added.

When Whitehouse spoke to PRWeek earlier today, he said he was disappointed by the tone of Ingham's response.

"[Ingham’s] response was to block me from his Twitter feed – how childish. I haven’t heard from Paul… but I am sure he will consult, look at the facts and come back with a measured response in due course.

"It’s so puerile. I raised a legitimate and real concern to the paid staff of an association of which I am a member. Even if he disagreed with the views that I had expressed, it is his job to engage with it properly and ensure it is considered by the appropriate people… the chair of the Public Affairs Board."

He added that his relationship with the PRCA boss had "generally been quite cordial", but added: "I just don’t like being patronised."

PAB chairman Paul Bristow said he respected Whitehouse's view but disagreed, and would discuss it with colleagues at the body's next meeting.

"As you know I don’t really see it that way and feel it is just retweeting news," Bristow wrote to Whitehouse. "I accept there is an argument that we should not be doing at all, and I think it would be appropriate to discuss with colleagues at the next meeting.

"I very much value Whitehouse’s input in PA Board matters now and historically. Paul Church is a valued colleague as were Chris and Carl before him. I also welcome and appreciate your input and historic perspective. It would be sad to see you walk away."