A heavyweight contest between PRWeek's five favourite Christmas campaigns was won – with nearly 5,000 votes – by #NotARetailStore for Twitter UK. PR agency The Romans devised a campaign that made John Lewis - the American lecturer famed for being mistaken for the British retailer of the same name - the star of a cleverly thought out film for the social media network.

Runner-up spot, with more than 3,000 votes, went to Iceland’s cause-led campaign Rang-tan, which highlighted the plight of orangutans in the face of devastating deforestation by palm oil producers. The film, in partnership with Greenpeace, became a major talking point after it was 'banned' from TV broadcast for its political nature. 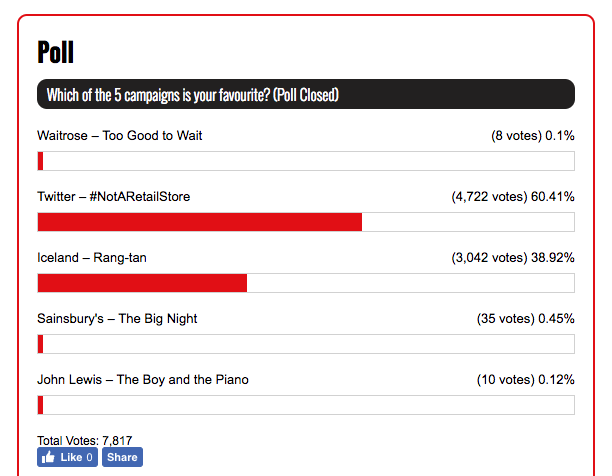 John Lewis - the American lecturer famed for being mistaken for the British retailer of the same name - finally got his moment in the sun as the star of a quirky campaign from Twitter UK.

The film, by The Romans, is shot on location at Lewis' home in Blacksburg, Virginia, and shows him doing what he does this time of year – dealing with wayward tweets aimed at the retailer. It pays homage to the tradition of the John Lewis Christmas advert with familiar nods to previous years, featuring the telescope, a miniature moon ornament, Monty the Penguin and Buster the Boxer.

"We’re very pleased to have been able to finally let John be the star of his own campaign," said Joe Mackay-Sinclair, founder and creative director at The Romans.

In case you missed it: Five Campaigns We Liked in October 2018: your winner revealed