More than 1,400 Googlers have signed a petition in solidarity with the campaign, including several senior engineers who have written a letter voicing their opposition.

The sensitive project, codenamed ‘Dragonfly’, blocks search terms like "human rights" so that it adheres to China’s strict censorship laws.

Under Chinese law, Google would be required to hand over sensitive user data to the government, which presents a real risk that the company would be helping the government persecute and imprison people.

PRWeek understands Amnesty International has tried to contact Google on at least three occasions, but has not yet received a response.

The main objectives of the campaign are to show solidarity and support with Google whistleblowers and to place pressure on Google to drop the project altogether.

"We also felt like we had quite an awareness raising job to do. With the first wave we want to start to educate people on what project Dragonfly is and get Google employees on side. We are really surprised by how quickly Google employees have come on board – it's a real stamp of approval," Amnesty International’s global creative manager Leila Mountford told PRWeek.

"In January, our plan is to start mobilising people globally; digital millennials who might think Google was a great brand and would find this very disappointing."

Amnesty International is calling on Google CEO Sundar Pichai to ditch the project and has rolled out a fake job ad on LinkedIn aimed at Google staff to encourage more to speak out.

In the video a, Google "recruiter" extols the benefits of working at the company before revealing the sinister details of Project Dragonfly.

"Dragonfly is our new prototype search engine being developed for China in order to be compatible with strict online censorship and surveillance controls," the recruiter said.

"Sounds like a mouthful, but it’s actually really simple. We’ll be helping the Chinese Government spy on nearly a billion people while also censoring out blacklisted websites, forbidden search terms, and public opinion on the internet."

The campaign will also comprise protests outside of Google offices around the world. So far there have been demonstrations in Spain, Germany, the UK and elsewhere (below). 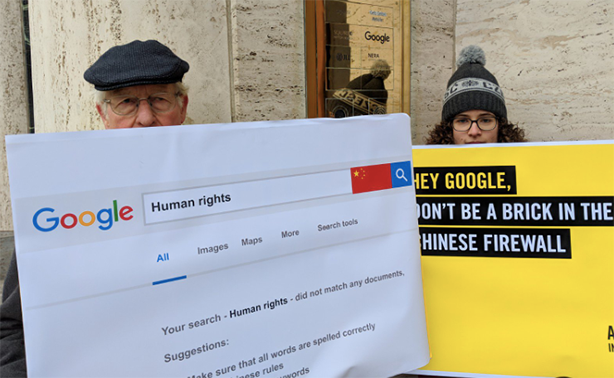 Amnesty International’s researcher on technology and human rights Joe Westby said Google should live up to its strapline – "do the right thing".

"As the world’s number-one search engine, Google should be fighting for an internet where information is freely accessible to everyone - not backing the Chinese government’s dystopian alternative," he said.

"It’s time to #DropDragonfly. Today we’re showing solidarity with all the Google employees who spoke out, but this is just the beginning," she said.

Google employees are invited to join supporters of Amnesty International around the world and sign the petition demanding the Google drop Dragonfly. 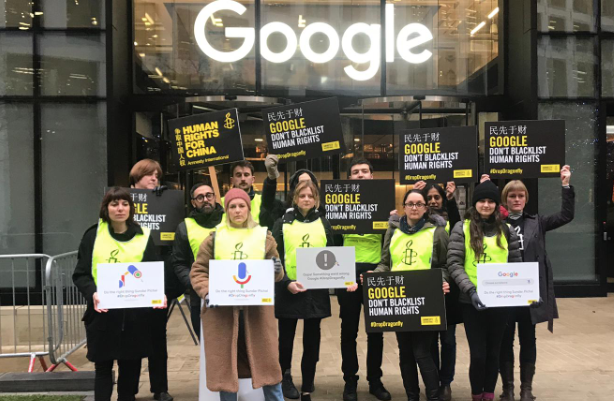 Amnesty International's campaign to highlight the issue of human rights abuses in Saudi Arabia following the brutal murder of journalist Jamal Khashoggi was chosen as PRWeek UK's Top of the Month for October.