The record-breaking battle between PRWeek's five favourite campaigns in October was won – with nearly 1,500 votes – by WWF's Stop Wildlife Trafficking. PR agency Manifest worked on a stunt in which an elephant (hologram) roamed around London, generating plenty of attention for the cause as it did so.

In second place, garnering more than 1,000 votes – enough to win the contest during most months – was the Department for Education's effort to attract people into teaching using themes of pride, encouragement and young people fulfilling their potential under the strapline: "Every Lesson Shapes A Life". 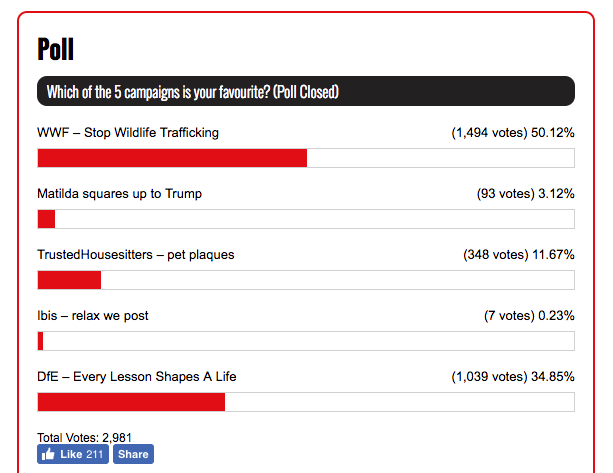 A life-sized hologram of an elephant was spotted roaming around London earlier this month as part of a new campaign for the World Wildlife Fund (WWF).

The pachyderm projection appeared at locations including St Paul’s, Abbey Road and Parliament and was part of the WWF’s Stop Wildlife Trafficking campaign. It aims to surpass 100,000 signatures on a petition to the British government to end illegal wildlife trafficking.

The campaign, from PR agency Manifest, urges supporters to promote the cause on social media using #StopWildlifeTrafficking and tagging @WWF_UK.

In case you missed it: Five Campaigns We Liked in September 2018: your winner revealed