The (DUREX)RED campaign is fronted by Swedish pop star Zara Larsson, who stars in a short video that encourages viewers to ‘give a f**k’ about AIDS by sharing online using #GAF.

The digital-first campaign brings to life the duality of meaning around the phrase ‘Give A F**k’. It aims to drive compassion and encourage young people to join the fight against AIDS through the simple act of having safe sex.

Durex has committed a minimum of $5m (£3.8m) to support the critical work of the Global Fund to fight AIDS in Africa. The Bill & Melinda Gates Foundation will match Durex’s $5m contribution taking the total to a minimum of $10m (£7.6m).

People around the world can purchase a (DUREX)RED condom, with funds raised from sales going directly to a programme in South Africa, where it is estimated that 7.2 million people are currently living with HIV.

"With 37 million people living with HIV and AIDS around the world, we all have a responsibility to join the fight to end this, both as individuals and organisations," Durex global category leader Ben Wilson said.

"Through this new PR and digital-first campaign with its bold use of language, diverse mix of talent and influencers, we’re aiming to inspire Gen Z to not just take notice, but to take action; and join an important new movement, with the ambitious goal of ending AIDS with our new partner, (RED)."

Larsson added: "For the first time ever, you can literally ‘have sex and save lives’. It is empowering that we can all help to protect ourselves by having safe sex, and at the same time, join the fight to end AIDS through helping girls in South Africa who really need our support." 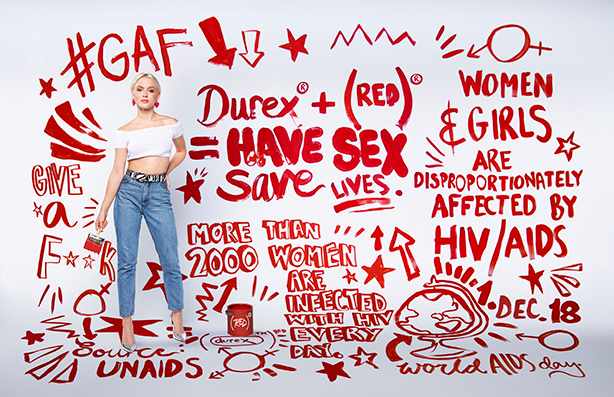