The amount and availability of data is changing how PR pros do their jobs. As such, it is no surprise so much focus is devoted to identifying the best tools to find, harness, and analyze all that available intelligence.

However, this year’s PRWeek/Cision global survey reveals an interesting twist that underscores an increasing commitment to getting data right. When the 410 senior-level marcomms leaders who took the survey were asked to identify the areas they need to improve upon most in terms of technology and data, talent was tied with tools as the top answer at 36%. Tactics scored 29%.

This is a notable change from last year, when 41% selected tools, while 32% chose talent. That closing gap indicates a greater recognition that tools need the proper talent to work optimally.

Power in the people

It is critical to have data-savvy staffers and partners, says Catherine Blades, chief brand and communications officer at Aflac.

"My boss and I get so frustrated with reports that show ‘Oh, this popped up,’ but the data feels so random," she adds. "You need unicorns who can take that data, translate it, make it relevant, and turn it into actionable insights you can measure against business objectives. I want to show my CEO how we’ve moved the needle."

Paul Gerrard, VP of strategic communications at BlueCross BlueShield Association, puts tools and talent on an equal plane of importance, especially given the rise of "dubious reality."

"There are so many dubious conversations online," he notes. "An organization can be attacked based on false information. The right talent is important to analyzing and determining the impact on our corporate reputation of what is being said about us. It helps us determine if and when to get involved."

"We want to be able to go upstairs in our building and say to someone, ‘Explain this data set to me,’" says Margarita Miranda-Abate of Novartis Oncology, where she is head of communications and patient advocacy for Latin America and Canada. "The reality is I’ve got to take this back to my business partners in the organization and explain it to them and why it is important."

Revealing a growing sentiment among many industry leaders, Miranda-Abate notes she is a lot more open to hiring a data person without a PR background. This is of particular relevance in an age of integration because, as she reports, Novartis’ data analytics team works cross-functionally, including with policy, marketing, and medical teams.

Tony Cervone, SVP of global comms at General Motors, says with all of his hiring decisions, regardless of department, an understanding of other disciplines is crucial.

"We’re building a team that is intellectually curious, has a good basis in comms, and is capable of taking on the analytics side," he explains. "We want it to be complemented by data-analytics people who possess some understanding of PR. It is a marriage between the two."

Speaking of marriages, the survey delved into the crucial marketing-comms relationship. Encouragingly, 87% of respondents report their company’s PR and marketing departments work well together. Last year, 81% said so.

Blades, formerly SVP of corporate comms who added "brand" to her title a year ago, exemplifies the increasing number of leaders determined to improve cooperation between the two functions.

"The team had been really struggling to find its footing," recalls Blades, who joined Aflac in 2014. The company went through five CMOs in 10 years.

She has since hired a VP of advertising and brand, and is about to hire a VP of marcomms. "I want to tier out the organization and show people a career path, but also push further that alignment," she explains. "We need horsepower behind that integrated vision."

PR can no longer afford an "us versus them" mentality, adds Cervone.

"This historic inferiority complex around the question, ‘Who is more important to a company?’ is missing the point," he notes. "To become a true partner in the business, we must say, ‘We’re in this together. Let’s share the same business results.’ That is how barriers can be broken down."

Of course, Rome wasn’t built in a day, so tensions between the functions still exist. When queried about their most difficult challenges, 47% of respondents placed comms’ continuing battles with paid media for budget among their top three. 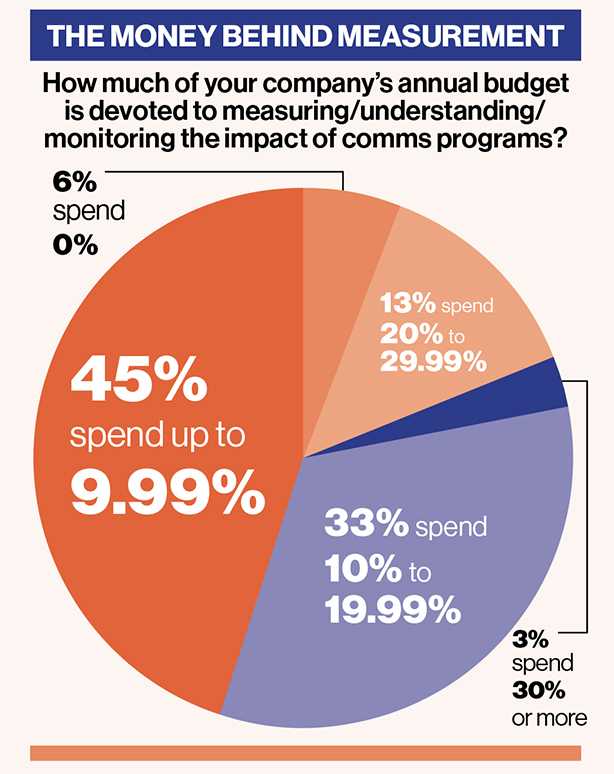 Turf wars still clearly exist. However, the leaders interviewed for this story see that as a reflection of the pressure PR faces in demonstrating its value to the C-suite in a similar vein to marketing and advertising counterparts.

And that is not a bad thing, as such forward thinking, which comms departments have increasingly adopted, has led to a decreased reliance on metrics such as impressions and ad value equivalencies.

"We’re constantly needing to prove ourselves," says Miranda-Abate. "We’re trying to demonstrate our metrics more in line with how marketing does. As such, the fight for budget is really about proving our value and getting the rest of the organization to understand we’re an integral part of telling the corporate story."

While data is a central focus for comms pros, the amount of time PR devotes to content — planning, creating, and reaching out about it — takes a back seat to nothing. In terms of the channels on which content is shared, this year’s survey data reflects an increasing affinity for "modern" channels over "traditional" ones.

When asked to identify the most effective form of content to influence consumer or customer buying behavior, social media was the top answer, with 54% placing it among their top three, as opposed to the 44% who did so last year.

When the focus turned to more traditional platforms, the narrative changed. Based on respondents’ answers, print
features, broadcast features, and even traditional ads all fell year on year.

"Journalists are critical," says Blades. "They give credibility to your key target markets."

Gerrard goes a step further by opining traditional media is, in some ways, even more important to brands now.

"A significant number of our audience goes to traditional earned media sources and mixes and matches that with other sources to get information," he says.

"For all the talk about the rise of social and digital media," continues Gerrard, "it’s worth noting traditional media has been evolving by doing some smart things with paid, shared, and owned offerings. They are creating digital platforms with interesting and engaging content, from both their own and other sources, and positioning themselves as a curator of trusted content."

Cervone agrees traditional outlets will remain very important for brands, but as part of a broader media strategy. PR pros must factor that a growing number of major media sources are only talking to and reaching an audience with shared political, geographic, and socioeconomic characteristics. This is creating an increasingly polarized populace in the earned media environment.

"We must not ignore large chunks of our current and potential customers by only measuring what is being said in what used to be ‘opinion-leading media,’" he counsels. "If the polarization of the populace goes to its natural next level, by definition we will end up with 50% of our audience reading, watching, and listening to certain media."

"You can get confirmation bias pretty easily in that kind of environment," adds Cervone. "It will be [interesting] to see who ends up trying to bridge that polarization and create a sense of communication between the two sides. It is important we understand who it is certain media are actually talking to, but also the audiences with whom they are not talking."