Tobacco giant Philip Morris Limited has launched a campaign calling on friends of smokers to help them quit – but has faced accusations of hypocrisy and cynicism.

The owner of Marlboro used a print ad at the start of 2018 to announce its intention to eventually stop selling cigarettes in the UK in favour of vaping and smoke-free tobacco products, which are widely regarded as less harmful than smoking.

Today (22 October), Philip Morris launched "Hold my light" with a campaign website and a film in which a woman navigates a maze of lasers to relinquish her cigarette lighter to a group of friends.

Alongside the activity, the company has taken out a wraparound in today’s Daily Mirror featuring advertorial introducing the campaign. The front page features the Philip Morris logo and a short article on the inner pages opens with the line: "If you’re a smoker, you may recognise the name Philip Morris. We’re known for cigarettes."

The film was created by Trigger, while content is by Other Creative. Biddable media and programmatic video display was handled by Merkle Periscopix and Amplifi, with campaign strategy and some media buying handled in-house. PR and social is being run by The PHA Group alongside the in-house press team.

The work encourages smokers to ask friends and family to pledge small, practical offers of support if they commit to giving up smoking for an initial 30 days. This could include looking after their pet or cooking dinner each night.

But critics pointed out that Philip Morris is not equally committed to eradicating smoking in all parts of the world.

Deborah Arnott, chief executive of Action on Smoking and Health, said: "Wherever it’s legal, Philip Morris is still advertising its Marlboro brand. The fact of the matter is that it can no longer do that in the UK; we’re a dark market where all advertising, promotion and sponsorship is banned, and cigarettes are in plain packs.

"So, instead, Philip Morris is promoting the company name, which is inextricably linked with Marlboro. That’s why we’re suspicious. If Philip Morris really wanted a smoke-free world, it would support every country having tobacco regulations as strict as those in the UK." 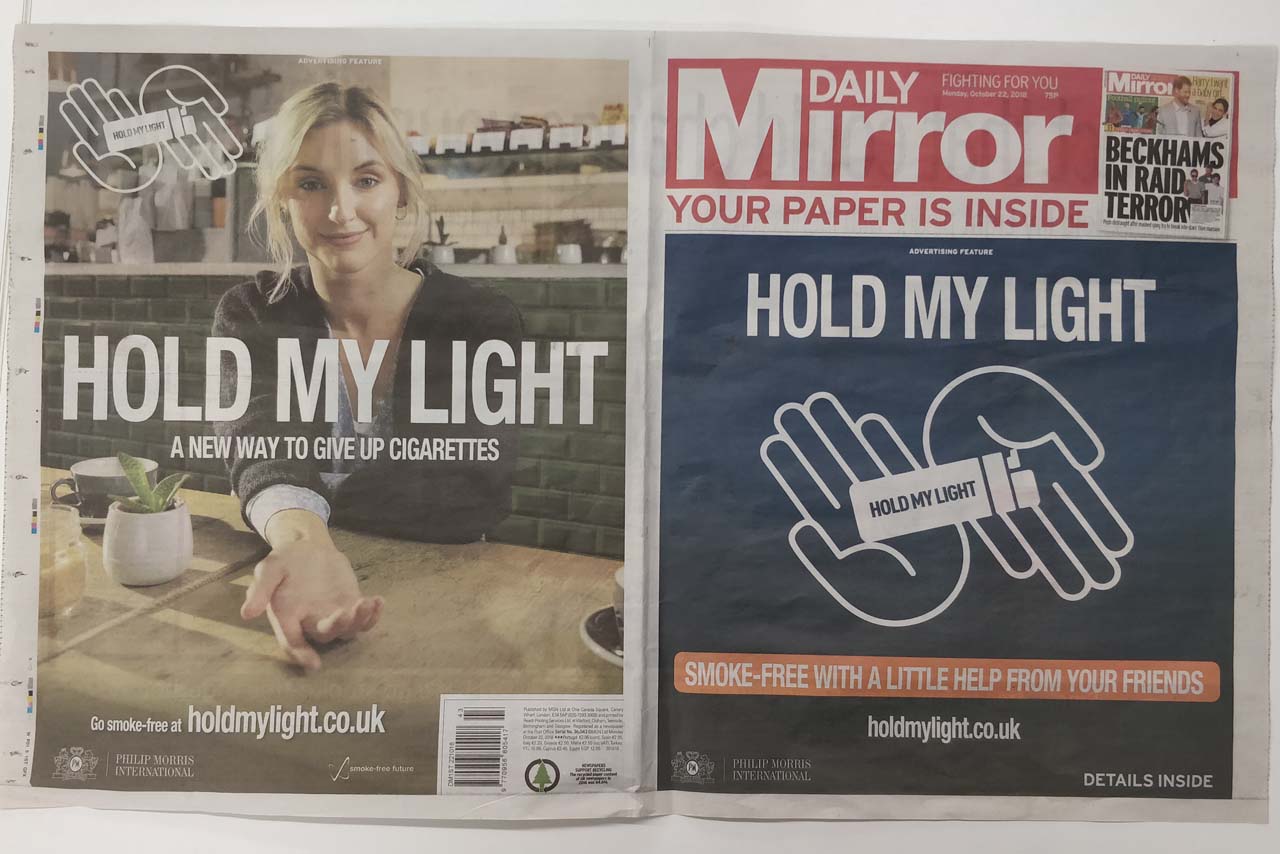 Philip Morris said the drive was based on behavioural-science initiatives that had created positive societal change and informed by Public Health England research that found smokers who gave up for 28 days were five times more likely to stop smoking completely.

It added that it was the first time a tobacco company had launched a campaign in the UK directly encouraging smokers to quit.

Philip Morris received support from the Mirror, which used part of its leader column today to congratulate the company on its efforts to support quitters: "Yes, we were surprised too that this is a campaign created by Philip Morris Ltd. But it can only be a good thing that they are now trying to encourage people to quit cigarettes."

Phil Smith, director-general of ISBA, commented: "We believe that advertising, when done responsibly, can be very powerful in raising awareness and educating the public."

Peter Nixon, managing director of Philip Morris, said: "This campaign breaks new ground, which is an important next step in our company going smoke-free and ultimately stop selling cigarettes.

"There are more options than ever before for smokers to give up cigarettes, but often they don’t realise that alternatives, like e-cigarettes and heated tobacco, are a better choice than continuing to smoke. Our research has shown that smokers want personal support from friends and family if they are to give up cigarettes – and that is what 'Hold my light' is designed to offer."