In late September, the sandwich chain made headlines for its response to teenager Natasha Ednan-Laperouse's tragic death and allergen labelling.

PR leaders and crisis comms experts largely agreed that Pret’s move to full allergen labelling has been too slow and the company could suffer brand damage.

New research suggests consumers are already cooling their affection towards the brand.

Newton Insight measured the social media sentiment of 40,000 accounts towards Pret a Manger between 1 January and 22 September, prior to the latest headlines, and from 23 September to 9 October, sharing the findings exclusively with PRWeek.

Joy towards the brand has taken a dive by 19 percentage points, while fear in Pret sandwiches has grown 6 points and anger is up 5.7 points. 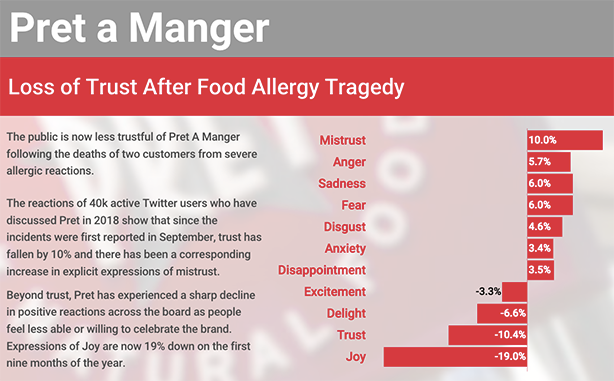 "In the first nine months of this year, the strongest emotional signals expressed by Pret customers were joy, trust and delight. These three responses have suffered the biggest downturn since the allergy story broke," Lynch said.

Lynch said there are several factors driving this downturn in trust. He believes the allergen tragedy is one of several challenges the brand has faced this year, including advertising and animal welfare issues.

"Some people see the food allergy incidents as symptomatic of a deeper corporate malaise," he added.

Specific to the food allergy case, there is consumer anxiety that Pret’s supply chain isn’t secure, which Lynch points out is particularly concerning for people with allergies, vegans and following diets for specific health or religious reasons.

"There is a concern the company's labelling policy is neither thorough nor consistent," Lynch added. "There is also criticism and anger at Pret's handling of the incident; some people are wondering if Pret can be trusted to do the right thing."

These sharp drops in trust and positive sentiment follow a well-trodden social media path for brands in crisis.

An analysis of social sentiment before and after Dove’s ad howler led to ‘trust’ dropping 13 percent points and ‘joy’ falling nearly 11 percentage points.

"In the weeks following the public reaction to the Facebook ad, Dove's customers became less motivated to engage positively with the brand," Lynch said.

"They didn't criticise Dove, but nor did they actively embrace it. Since the start of October, we have seen a similar pattern developing amongst Pret customers, with fewer people commenting on how good the coffee is or how cheerful the staff are." 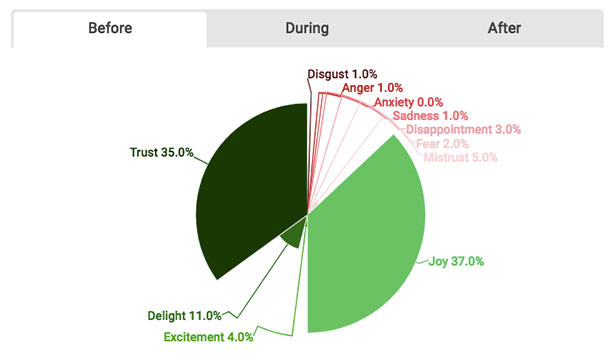 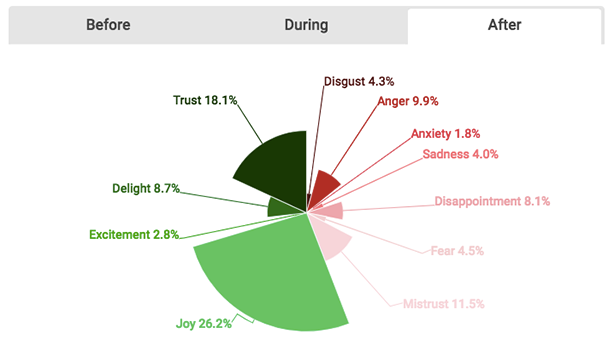 Lynch said similar PR disasters with American Airlines and British Airways followed a similar pattern of initial 'spikiness' that subsides if the company takes meaningful steps to fix the problem.

"But the embers of the firestorm can last much longer, in terms of residual mistrust and a more muted relationship with customers," he added.

He adds that the tone of voice required to respond to angry customers is very different to how a company should address a source of customer sadness or anxiety.

"In the case of Pret, how the company speaks is at least as important as what it says," he concluded.