The study, Authentic Insights: the Dying Days of Spin, polled 1,000 UK consumers and found that half of them are less likely to purchase a product from a brand that behaves in a way that contradicts its corporate values, while 60 per cent believe it is important for companies to express their views, even if they disagreed with them.

However, the study found consumers are wary of brands that take advantage of social, cultural and political events for personal gain. A key theme of the report is that brands should ditch spin.

Eighty-five per cent of consumers noted they had seen an example of companies latching onto events for personal gain, and 60 per cent felt less favourable towards brands that do this.

"The growing expectation that companies have a voice shows that society as a whole is looking for more robust leadership and active participation in issues by companies," FleishmanHillard Fishburn managing director of corporate communications Stephanie Bailey said.

"Standing by is no longer an option. In fact, our research shows that there is a greater risk for companies in doing nothing then in taking a stand."

Social cause marketing has become an increasingly popular practice in the marcoms space in recent years.

Nike’s recent Colin Kaepernick Just Do It campaign divided consumers in the US between those that applauded Nike’s courage for sticking by the quarterback and those that protested against it, with some lighting Nike clothing on fire.

Despite the backlash, Nike reported a sales surge of 31% for its products in the days that followed the campaign.

"The potential of brands to boldly take a stand behind an issue was brought front and centre this year due to Nike’s decision to work with Colin Kaepernick. This demonstrates the power – and some might say responsibility – of brands to drive public debate and show moral leadership," FleishmanHillard Fishburn UK head of crisis and issues Judith Moore said.

"Nike’s campaign led to a strong response and – within the US particularly – it has divided opinion amongst consumers. What is certainly agreed upon, though, is that it exemplifies a growing trend that people expect brands to have an opinion and to state their moral and ethical position on issues – even when the issues don’t specifically relate to their core products or services."

The study also looked at the issues that are most important to consumers and the issues companies are expected to act upon. 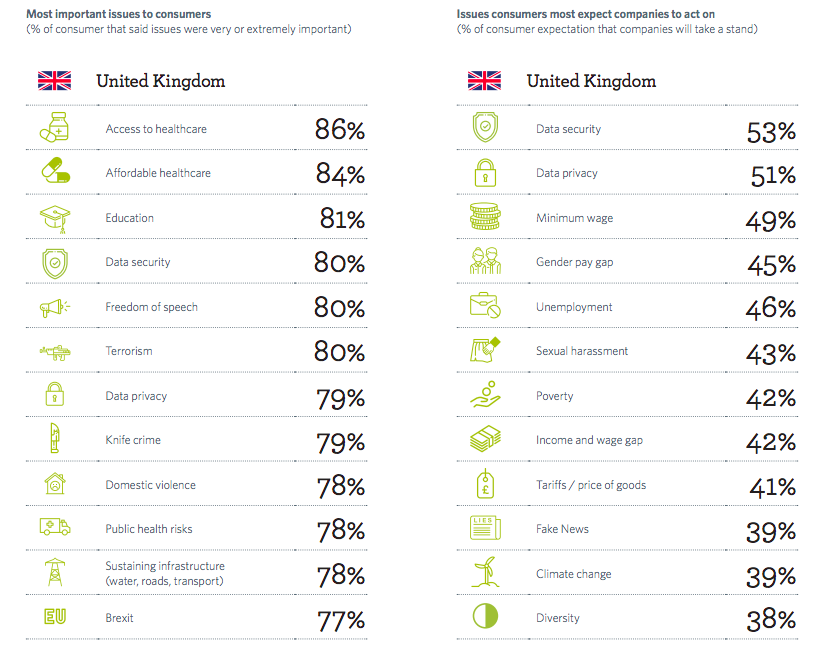