This year’s campaign features a six-minute film in which the presenter (pictured below) talks about his own battle to give up the habit, having quit earlier this year after smoking at least 20 cigarettes a day for 35 years. 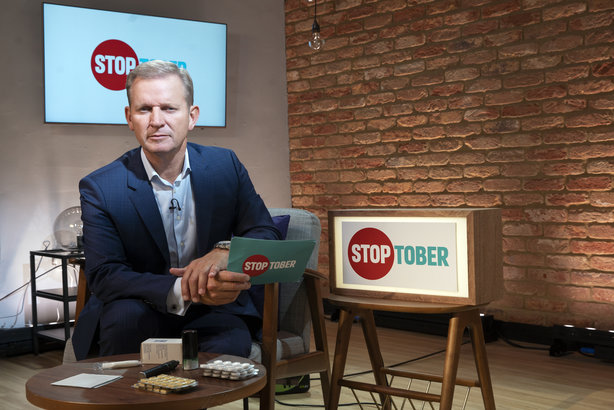 Kyle speaks to a doctor and a smoking-cessation adviser, as well as someone who gave up after a 50-year habit and two men who are going to try to stop.

Several shortened versions of the film have been produced for use on social media.

In addition, a TV ad shows the residents of a suburban street pushing along a giant red ball emblazoned with the word "Stop" and urges smokers not to quit without help.

The key message of this year’s campaign is that it's easier to stop smoking with the right support.

PHE recommends that smokers not try going 'cold turkey', but instead use a mix of strategies, tools and support to help them give up.

An online Personal Quit Plan has been developed to reinforce this message. It asks three questions and provides a tailored plan signposting people to the different ways in which they can get help to quit.

Sheila Mitchell, PHE marketing director, said: "The best way to quit is with support. That’s why we are encouraging people to try our new Personal Quit Plan today and search 'Stoptober' to join thousands of others quitting together from the 1 October."

Since it began in 2012, the campaign has resulted in more than 1.7m attempts by smokers to quit the habit.

However, in recent years there has been a big drop in the number trying to give up – with funding cuts reducing the impact of the campaign.

PHE officials warned, in the evaluation report on the 2016 campaign, that: "If future investment is maintained at 2016 levels the long-term health of the brand and participation can be expected to erode."

While there has been an increase in funding since 2016, it remains far short of what had previously been spent on Stoptober.

And the success of this year’s campaign is likely to be limited due to the £1.1m in funding for this year’s Stoptober being a fraction of the £3.9m invested in the 2012 launch campaign.

While Stoptober is aimed at all of England’s 6.1m smokers, this year's campaign is particularly targeting those who work in manual or routine jobs, where smoking rates remain higher than the average.

This year's campaign partners include Amazon, which will have a special Stoptober page highlighting various smoking-cessation products; pharmacies, including the Boots chain; the Independent British Vape Trade Association; the Post Office and Next, among other employers; and more than 25 football clubs, which will promote the campaign to fans on match days.

Professor Robert West, director of tobacco studies at University College London, commented: "Stoptober is one of the main areas of spending on smoking campaigns, if not the main one, and it’s always a battle for the people in PHE to get agreements for funding to do it."

He added: "If you spend more on a campaign you get more for it."