At the PRCA’s National Conference on Friday (21 September), several PR and comms leaders, including the CEOs of Ketchum and Golin, bemoaned a lack of confidence holding back the discipline.

But this isn’t the view of PR from senior marketers or advertising executives, according to an global adland veteran.

Richard Pinder, the chair of Universum and former COO of Publicis Groupe, said adland believes we are approaching "peak PR", a position that advertising enjoyed in the 90s.

"Those of us in the advertising business think that you guys are in the sun. Having sat [at this conference] for quite a bit today, I’m not sure you think you are in the sun," Pinder said in the final presentation of the day.

"During ‘peak advertising’, there was a time in the 90s when if somebody from a TV news show needed a point of view, an ad executive could go on it. These days that’s just never going to happen; they don’t want to hear from ad execs because [adland] is gone, it’s done, it’s not interesting. We think [the PR industry] is now in that frame."

Proof of this comes from brands increasingly taking a punt on social cause marketing, such as Colin Kaepernick headlining Nike’s Just Do It campaign or Levi’s boss taking a stand on gun control.

At a recent PR conference, Pritchard said: "PR is where we are at – we’re only interested in reputational management and the impact on the consumer. We want people to talk about stuff, we want to change the conversations and you guys lead that...but don’t blow it". 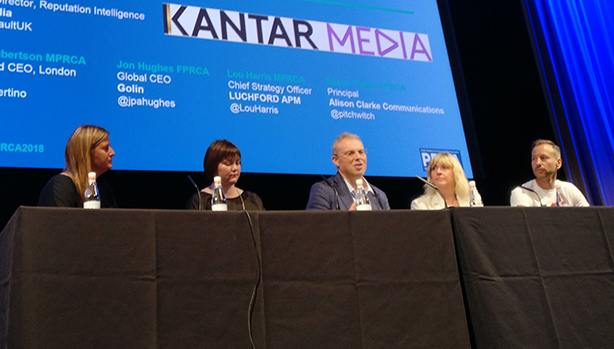 ‘PR is crap at PRing PR’

This glowing assessment of PR by outsiders is not widely shared within the PR community.

In an earlier a panel about about PR punching its weight in the marcoms mix, Ketchum partner and CEO Jo-ann Robertson cut a frustrated figure over a lack of confidence blighting the industry.

"The biggest frustration for me in our industry is our lack of confidence, and too often we let other disciplines in the marketing mix and outside diminish the valuable role we can bring," Robertson said.

"But we actually do it to each other and unless we collectively really value our profession, the work we do and impact we make, we are never going to make that leap to being at the top table and being seen as a business imperative."

She warned that agencies who undercut in the pitching process – and there’s always one willing to do so – undermine the value of the discipline for all.

Golin global CEO Jon Hughes said this lack of confidence is clearly illustrated by agencies’ reluctance to embrace the term ‘public relations’ in describing their businesses.

"For some reason we want to call ourselves every other possible combination of words we can think of that someone else hasn’t thought of...instead of just saying public relations is a ‘damn good profession’," he said.

Luchford chief strategy officer Lou Harris believes that PR sometimes struggles to define what it does, while communications principal Alison Clarke bluntly added: "PR is really crap at PRing PR and I think we should take a leaf out of our own book."

Despite what PR thinks of itself, Pinder warned that while the sun is out, the sector needs to ensure it not only makes hay, but future-proofs itself from some of the headwinds that are reshaping modern marcoms.

"You might say he is wrong, it’s not right for him and he is walking away from the old, but what I would submit to you is that when somebody who hasn’t been proven that wrong on the topics about the future of the industry and has client access like no-one else – it is certainly a yellow card that’s worth bearing in mind," he said.

Pinder, a former Leo Burnett EMEA boss, said that similar conversations were taking place 15 years ago when the industry was coming off "peak ad", but few acted and now all three advertising groups he previously worked for (WPP, Publicis and Crispin Porter + Bogusky) are 5 per cent away from their stock-price lows.

Pinder said the areas in which advertising groups blew it was by trying to increase scale too quickly without considering how this might benefit client service, with almost all holding groups now in a state of reinvention.

He said advertising leaders have often been too slow to adapt to change, and there has been too much focus on their own profit margins when clients were more "interested in coming up with ideas on how they could grow".

"People were moaning about the fee levels and there was a bit of that [earlier at this conference] but the clients every year are having to cut their costs on all aspects of their business and get more efficient," Pinder added.

The biggest strategic disaster for adland that the industry is now having to come to grips with is the fragmentation of services when advertising agencies split up creative and media.

"The fragmentation of the ad business was pretty shattering. They just blew everything apart at a time when clients wanted things to come together," Pinder. "Now things need to come together more than ever.

"In the PR world, when you are looking at your definitions of what you do, I would try to broaden it, not narrow it. Make it more encompassing and don’t fragment it. While it feels quite attractive to divide margins, you end up becoming less important to your clients in the long run and that’s not so cool."