The lesson for advertising and communications professionals is consumers are more responsive to ‘rational’ drivers than ‘emotional’ during these uncertain times, although a combination of both works best.

These are the main findings of WE Communications’ Brands in Motion 2018 report, which surveyed 27,000 consumers and business decision makers about teir perceptions of 90 brands and eight categories in the US, UK, South Africa, China, Australia, Singapore, India and Germany.

This doesn't mean that emotional drivers or messaging is dead.

Almost all consumers (97%) want brands to operate ethically and companies that take a stand for a social cause should do so authentically – as was recently highlighted by Nike’s new Dream Crazy ad starring former NFL star Colin Kaepernick.

However, brands should focus their comms more on the ‘show me’ rather than the ‘tell me’, and this provides a new opportunity for marketers and comms professionals to engage with a target audience.

"Rational persuades and emotional motivates – you have to have a balance of those two things in all of your marketing. But I do think what changes is the nature of how you engage," WE Communications president of international Alan VanderMolen at the study’s launch in London.

"It’s a little bit less about covering the market with a brand message that can be emotive, and a lot more about meeting the relevant needs and expectations of the consumer.

"We are moving to an environment where there is the ability for brands to create real-time creative in the shortest period of time and they need to understand where to drop it in the media ecosystem to drive engagement-based communications. It’s less about the 30-second spot."

The results indicate consumers have moved on from last year, where a burning question was how a brand navigates a post-truth world to allow emotions and impactful stories to reach the forefront.

Functionality trumps purpose, but a combination is best

In the case of that Kaepernick ad, VanderMolen points out that Nike had long ago addressed is supply chain labour issues, which now allows it to play in the social cause space.

"Whether you agree with the Colin Kaepernick stand or not, the point is they understand their consumer base and have permission to take a stand on those kinds of issues and they did," VanderMolen said. "The capital market punished them in the short term, however Nike sales shot up in the same week."

Other companies that do social cause marketing effectively are Starbucks and Unilever.

"[Starbucks] placed bets on climate change and a lot of bets on fair trade because a lot of the farmers in small markets are trying to earn subsistence income and they want to raise that because it’s good for its business," he added. "Doing those things well has given Starbucks a licence to take a stand on those public issues."

The UK - a sceptical market

The study asked consumers to rank different ‘rational’ and ‘emotional’ drivers between -100 and 100 for brands and categories.

On average, in the past year emotional ratings increased by 14% and rational by 16%.

How each category rated in the UK

The category that dropped the most in the UK was enterprise technology (see chart above). Its average emotional rating fell from 24 in 2017 to 12 this year, while rational dropped from 20 to 12.

This regression in B2B tech was consistent across all developed markets and is down to breaches of trust, including Facebook’s problems with Cambridge Analytica, the disruption caused by GDPR, and social media companies struggling to combat toxic content and abuse on their platforms.

VanderMolen said this should serve as a ‘warning sign’ to Silicon Valley. "The tech brands have to engage better with customers and consumers to not only talk about what they‘re doing, but how they are doing data privacy at a bare minimum," he said.

The research found that if tech brands do not take responsibility for ethical innovation, 94% of respondents are happy for regulators to step in.

PRWeek asked VanderMolen whether consumers really cared enough about the ethics of tech firms that are pervasive in their lives, such as Facebook, to walk away.

"Their [financial] numbers are up but their numbers come from advertisers, not consumers. Are consumers leaving the platform or going to other platforms? Millennials sure as hell are and the next generation down sure as hell are," he said.

"The big takeaway this year is 'innovation, say hello to ethics'. And that expectation from consumers is loud and clear." 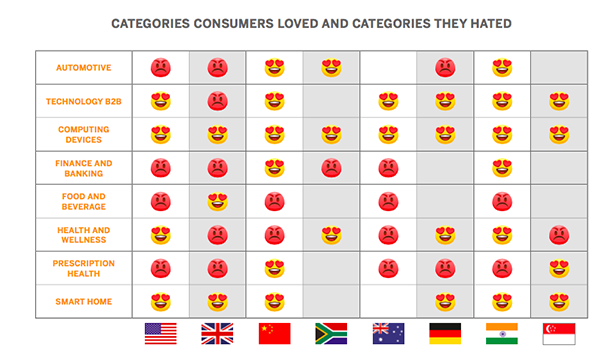