The battle between PRWeek's five favourite campaigns in August was won comfortably by Deliveroo's clever recreation of the iconic 'Lunch Atop a Skyscraper’ photo. Produced by agency Talker Tailor Trouble Maker, the food delivery distruptor's competition ended up with a dominant 396 votes in our poll – more than three quarters of the total number.

In runner-up spot, with 64 votes, was HTC's parody of Kim Kardashian’s selfie obsession featuring Gemma Collins from The Only Way is Essex. 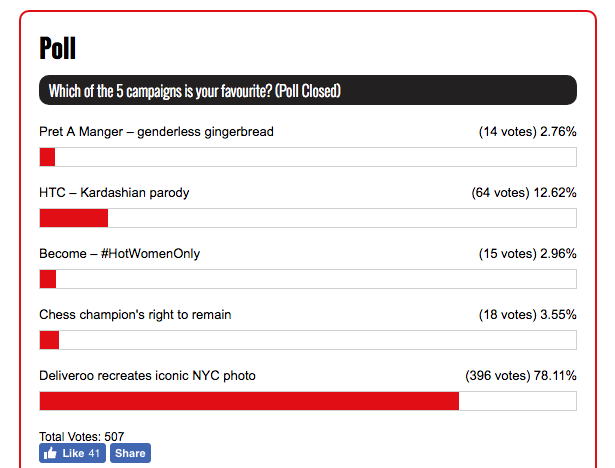 The food-delivery brand ran a competition inviting members of the public to dine along a metal girder 450ft up in London, recreating the famous ‘Lunch Atop a Skyscraper’ image of workmen taking a break in New York City in 1932 – but this time, with safety harnesses.

Yesterday we launched our re-creation of the world’s most famous lunch, serving brave Londoners a delicious Deliveroo lunch – at 450ft in the air! Read more: https://t.co/FAPSSOzhaF #EatUp

The campaign, executed by agency Talker Tailor Trouble Maker, was launched to celebrate a 210 per cent increase in orders during the recent UK heatwave. It generated coverage across media outlets including the Daily Mail, Mirror and Metro. Deliveroo launched the sky-high meal after commissioning research that found millions of British workers have fallen into a cycle of boredom when it comes to office lunches.

In case you missed it: Five Campaigns We Liked in July 2018: your winner revealed