Potentially the most simple, shocking and powerful image of the tournament was one created not by a pitch-side snapper but the creative firm J Walter Thompson, for its client the National Centre for Domestic Violence (NCDV).

A bloodied woman's nose and mouth, forming the cross of St George, pushed out on social media in a campaign called The Not-So-Beautiful Game, reminds us all of the horrifying reality that domestic violence increases by a quarter when England plays, and by even more when the team loses.

The campaign caused a huge spike in website traffic for the NCDV and gained traction and prompted debate across social media.

If #ENG get beaten so will she.
Domestic violence increases 26% when #England play, 38% if they lose.
From the Not So Beautiful Game, J. Walter Thompson London for the National Centre for Domestic Violence#WorldCup pic.twitter.com/raHBWIjbgS

As an official FIFA partner, Coca-Cola hit us with myriad campaigns, but its #PassTheHappiness work is our favourite, and not just for the pun.

Partnering with singer Jason Derulo, Coca-Cola has pledged that they will donate 150,000 of One World Futbol's unpoppable balls to young people in disadvantaged countries. Anyone can participate in the campaign by simply purchasing a Coca-Cola product and selecting a charity to donate the balls to, which also enters them into a competition to win one of 1,000 prizes.

British Airways demonstrated an enviable ability to tap into the zeitgeist on several fronts as the World Cup progressed. A tactical ad showing an optimistic boarding pass showed that the brand was on the ball, while two further earned media wins the following week cemented BA's status as a star performer.

The first was a video of a football-themed safety demonstration on board Russia-bound flights, while a couple of days later the airline started giving out free waistcoats to anybody heading to Moscow ahead of England's semi-final.

Domino’s rolled out one of English football's quirkier stars - the tousle-haired fishing enthusiast and former Wigan and Fulham star Jimmy Bullard. Under the title 'Staying at home', it released a series of amusing videos of Bullard watching the games in his home, or in one case in a paddling pool in his pants, eating the brand's pizza.

This humorous campaign managed to capture the essence of watching the World Cup in England, but sometimes didn't seem like a campaign for Domino's as much as a vlog of Jimmy Bullard's life.

Mobile operator Three UK introduced a patriotic twist to their usual logo, by adding three lion emojis to the front of selected shops in support of the Three Lions.

The phone company ran a competition alongside the revamp, encouraging people to see how many times they can flick the ball against a wall. People would then post the photos on social media using the hashtag #ThreeWallBall.

The feline trio were later replaced with teary-eyed versions following England's exit. Simple and effective, but not enough to push this higher up our ranking.

McDelivery from UberEats called in a notable absentee from the tournament for its campaign, the majestic Italian playmaker Andrea Pirlo, whose team had failed to quality.

The initial video and concept of getting stars from across the world to lobby Pirlo to support their team was great fun, his star power certainly an asset for the company.

Unfortunately, once you've chuckled at that initial concept, you're left with the same promoted tweet showing the (admittedly likeable) ex-England striker Peter Crouch doing his trademark robot dance popping up on Twitter too many times.

It's coming home @Pirlo_official. This is how we're going to celebrate when England win the World Cup ?? #TeamForPirlo #Ad pic.twitter.com/T3WJeDiEb3

There's nothing wrong with unusual tactics at a World Cup, if you think they'll succeed. And one of the central videos for FIFA partner Hyundai's World Cup campaign is not just unusual, but downright bizarre, with its dreamlike quality, hints of disaster and a lacklustre Bob Marley cover by Maroon 5.

That said, Hyundai have covered a lot of bases with their activations, putting the World Cup trophy on display at one of its showrooms in Moscow, running a pre-tournament competition asking fans to write the slogans for the teams' official buses and creating an interactive Hyundai cheering stadium, which has enticed millions of fans from across the globe to record a chant to win one of 2,018 prizes.

Well done to England and Australia fans for being the most keen to shout at their computer.

Bottom of the group

William Hill probably wasn't betting on controversy when it sponsored the Twitter hashtag #itscominghome. When the hashtag was used, a William Hill-branded football emoji automatically popped up next to it.

Given the popularity of the hashtag due to England’s success in the World Cup, fears grew that under-18s would be exposed to this promotion, and William Hill consequently ended their sponsorship of the hashtag.

While the betting firm has gained the public attention it had originally sought, it has not been in the form it desired. It would not have been aware of the takeoff of the usage in the hashtag when it first sponsored it, but it surely would have known that minors would be engaged with the World Cup. 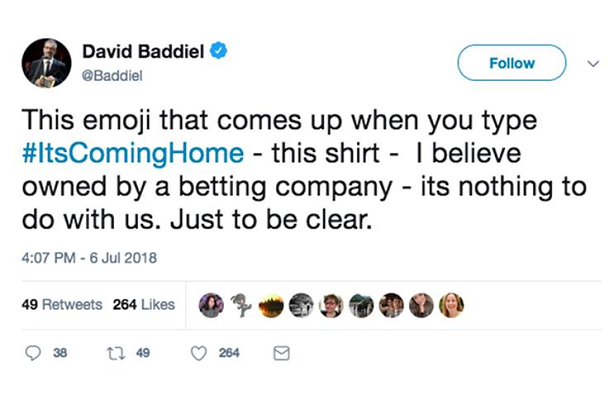 Mastercard's World Cup campaign at first glance seemed well-intentioned, and no doubt it was. The campaign idea was to pit Argentina's Lionel Messi and his Brazilian rival Neymar against each other, with the company donating 10,000 meals to starving children every time one of the players scored.

Cue plenty of cynicism and criticism; the ill-thought out nature of the campaign is why we have placed it amongst our worst campaigns.

A PR own goal. Priceless. https://t.co/L7DIhtnlco

Prior to the tournament, Germany's largest airline would probably have been pleased to hear that its Wie in Rio campaign video was as successful as the country's football team. But just as Germany flopped in the tournament, so the video (whose title translates to 'as in Rio', a reference to die mannschaft's 2014 World Cup victory in Brazil) was found lacking.

Specifically, it turned out that the Lufthansa video was filmed not in Russia, but in the capital of neighbouring Ukraine. The countries do not enjoy the most cordial of relationships. The video was roundly mocked, although Ukraine's foreign minister took it in good humour.

Burger King Russia ran a campaign which was frankly appalling on an innumerable number of levels.

The campaign was as such: the fast-food chain was offering a lifetime supply of burgers and a cash prize of circa £36,000 for any woman impregnated by a World Cup footballer.

Needless to say, to got the backlash it merited. Burger King Russia has apologised for the campaign, as well as pulling it down from the site it was debuted on.

Read next: If words could win the World Cup - a look at the presentation skills of the semi-finalists coaches