Stuart-Lacey, who has previously run comms for several government departments, including the Cabinet Office and the Department for International Trade, was appointed to the permanent role at HMRC in January after serving there in an interim capacity since last May.

Setting out her priorities for the year ahead, she told PRWeek: "One of my big priorities this year will be on continuing to build our reputation, and reviewing our brand persona – it’s really important we connect with customers in a way which makes their experience as easy and efficient as possible, whether online, by letter or over the phone. Externalising our organisational values is key to getting that right, and applies as much to customers as it does to our employees."

‘Tax’ ducks have been encouraging customers to file their Self Assessment ahead of 31 January deadline. https://t.co/HO3dpL19IA

Stuart-Lacey added: "I’m really pleased with how the campaign ran, and so far the metrics are looking really strong."

Other campaigns in the pipeline at HMRC this year include comms campaigns about tax-free childcare, savings and tax credits renewals, which will roll out from the spring.

Stuart-Lacey, who studied French and Italian at the University of Hull, has made her career in central government comms over the past 18 years and has never worked in the private sector. 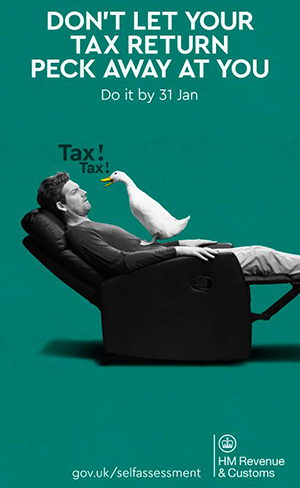 Her first stint at HMRC was as its head of comms in 2012, with responsibility for internal and external comms about benefits and credits, a role she held for more than three years.

From here, Stuart-Lacey moved to the Cabinet Office, where she was head of comms for nearly two years.

A short stint as interim director of comms at the Department for International Trade followed before she returned to HMRC in the interim comms director role.

Commenting on her appointment, Stuart-Lacey said: "I’m thrilled to be able to take on the role permanently at HMRC – I’ve been inspired by the dedication of the people I’ve been working with since last May and I’m excited to lead the communications profession at such a critical point in our departmental history."

She added: "I’m really grateful for the experience I’ve gained in my last roles at the Cabinet Office and Department for International Trade, and to be continuing to work with a hugely talented community of communication directors from across government."

Last week, it was revealed that Toby Nation had taken on the role of permanent director of comms at Defra, and earlier this month Lester Posner was announced as the new director of comms at the Health and Safety Executive, again after first serving in an interim capacity.

Meanwhile, in November, Andy Tighe was appointed director of comms at the Home Office.