Motorcycle insurance broker Carole Nash has been a partner of Northern Irish motorcyclist Jonathan Rea for several years. In September 2017, he became the first man to be Superbike World Champion in three consecutive years.

Carole Nash asked its PR firm Ready10, a start-up agency it had hired not long before, how it could celebrate the achievement.

@jonathanrea 2017 WorldSBK Champion!!!
3 in a row for the first time in the WorldSBK history!#JR3PEAT#R3PEAT pic.twitter.com/AGpQGAuUgF

Ready10 found that no bikers had been shortlisted for BBC Sports Personality of the Year for 10 years, so decided to try to get Rea on to it - and see if he could win it.

Ready10 created a Change.org petition calling for a space on the SPOTY shortlist for Rea, in the name of Carole Nash. Signatories were urged to spread the word by tweeting or posting to Facebook, and Rea and his wife gave media interviews and used Twitter to do the same.

Ready10 had a specific focus on three audiences: the biking community, people in Rea’s native Northern Ireland, and in the Isle of Man, where he lives. Motorsport broadcaster Suzi Perry was among those posting in support.

Dear bikers & anyone who understands the rarity of a 3 x World Champion. Tweet the holy moly out of this ???? in any case @jonathanrea u rock https://t.co/HVqAu2v5aA

The petition got 6,000 signatures within 48 hours, was covered in outlets including biking media, The Sun, BBC Online and Belfast Telegraph, and passed 10,000 within a month.

After liaison with SPOTY’s production team, it was arranged that 12 petrol heads (below) could deliver the petition to the BBC in Salford, in November, including Ready10’s dossier explaining to the panel why Rea should be nominated (below) – the first time the panel has been lobbied in this way. 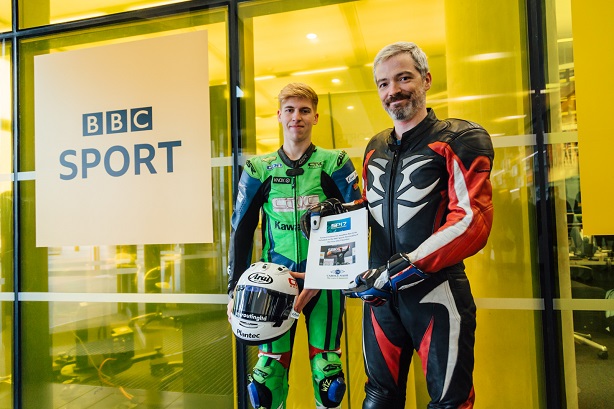 Rea made the shortlist, which was announced at the end of November.

Voting is due to open any minute for @BBCSport so make sure you head over to the BBC and register your vote for @jonathanrea -> https://t.co/eDZF8IwGXr #SPOTY #SPOTYvoteJR

The SPOTY ceremony took place in Liverpool on 17 December, and the previously little known Rea came a very close second to runner Sir Mo Farah, and well ahead of household names like Harry Kane, Chris Froome and Lewis Hamilton.

Rea said of the campaign: "I believe this is the first time a petition has ever been presented to the BBC SPOTY judging panel and I am truly grateful for the support I've received from the teams at Carole Nash and Ready10. Motorcycle racing struggles for a national profile and I hope this helps boost the sport in the mainstream a little."