News
Tweet
Share
The survey of comms chiefs at 130 of England’s 232 NHS Trusts, carried out by NHS Providers, paints a complex picture in which they report greater recognition of the importance of their objectives to the overall running of services, while grappling with fewer resources than ever, including those necessary for meaningful measurement of their work.

The ‘State of NHS Provider Communications 2017/18’ report, which is published tomorrow, asked comms chiefs who they report in to, with 44 per cent saying they reported to their chief executive, while 17 per cent reported to a strategy director and 10 per cent to a corporate affairs director.

When asked if they felt they had parity with other senior staff working at their trust, 67 per cent of all respondents said yes and 29 per cent said no, however this fell to 59 per cent for those who used the word  ‘manager’ as their title.

A seat at the top table?

The question speaks to the perception that comms is not universally regarded as a strategic function and that some senior comms chiefs feel they have a second-class status compared to other board-level positions on NHS trusts.

In written responses, some comms chiefs told the survey this was improving.

One said: "Although I am not a director or sit on the board, I feel I am taken very seriously and people respect the work that I do. I have access to the key decision makers and my guidance is listened to and valued by the board."

However, other comms chiefs reported a lack of understanding of their role by senior colleagues.


Within the trust there has been a limited understanding of what we do and what good looks like. This is improving, but has taken time and effort to gain the trust and confidence of the senior team.

A respondent to the ‘State of NHS Provider Communications' survey

One said: "Within the trust there has been a limited understanding of what we do and what 'good' looks like. This is improving, but has taken time and effort to gain the trust and confidence of the senior team."

Other comms chiefs who felt they lacked parity with colleagues said they felt that comms was undervalued and seen as a support service rather than core business, leading to a degree of resentment.

One said: "I have credibility and leadership without authority, but although considered a senior leader I don't attend the trust management team…bizarre that I am not included at this meeting, particularly as I receive tasks from it."

Another added: "Because I do not attend exec meetings etc, I often find myself finding out about issues/initiatives third hand, with limited time to influence or recommend comms handling." 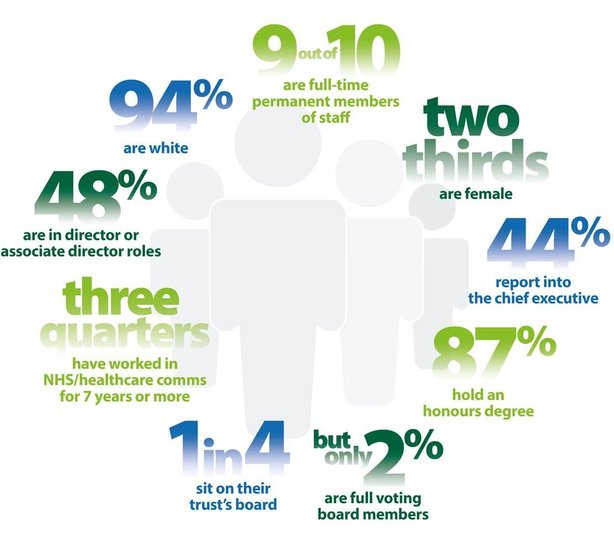 A profile of the demographic background of the comms chiefs surveyed found that 65 per cent are female, 94 per cent are white and that 87 per cent have a degree and have worked for the NHS for at least seven years.

It also found that they run teams which, on average, are made up of seven full-time members of staff.

The survey shows how comms chiefs are working in an environment in which budget cuts across the whole of the NHS have impacted on their ability to meet growing and complex comms demands with fewer resources at their disposeal.

Asked if their staffing budgets had gone up or down in the last 12 months, only 14 per cent said they expected it had increased, while 40 per cent said it had decreased and the remainder said it had stayed the same.


Measuring and evaluation only takes place on an ad-hoc basis. This is due to the low number of staff compared to the high volume of work – often this isn't seen as a priority.

A respondent to the ‘State of NHS Provider Communications' survey

Frustratingly for comms chiefs, reduced staff budgets mean they are often unable to spend the time to apply proper measurement to their activities and therefore demonstrate the value of what they do.

One comms chief told the survey: "Measuring and evaluation only takes place on an ad-hoc basis. This is due to the low number of staff compared to the high volume of work – often this isn't seen as a priority."

Another told the survey: "People in the NHS unfortunately do not understand and therefore value the importance of corporate comms, as so much of our work is hard to measure and we never have the budget for proper evaluation to demonstrate this. Where we are understood and valued they are worried about the perception of investing too much in comms as we are not frontline or clinical."

The trend away from specialism

Reduced staff resources have led to concern among comms chiefs that they did not have the right mix of skills to provide an effective service for their trust, with 38 per cent telling the survey they were either worried or very worried about this, while 43 per cent said they were either confident or very confident about the capacity of their teams.

Staff cuts have led some comms leaders to alter the complexion of their teams, with a trend towards staff with more general skills rather than specialists, the survey found.

One respondent told the survey: "I have restructured the team, putting in place a deliberately flat structure of communications generalists, to deliver more integrated comms working across channels – rather than having a media lead, internal comms lead etc."

In addition to losing specialists on their teams, another concern is the lack of training and development being offered to comms professionals from within the NHS because of a lack of funding or staff capacity, among other reasons, leading to fears of a long-term generational skills gap.

Nearly two thirds of comms chiefs surveyed said there were not enough training and development opportunities coming from within the NHS, while a fifth said there were.

What are comms teams spending their time on? 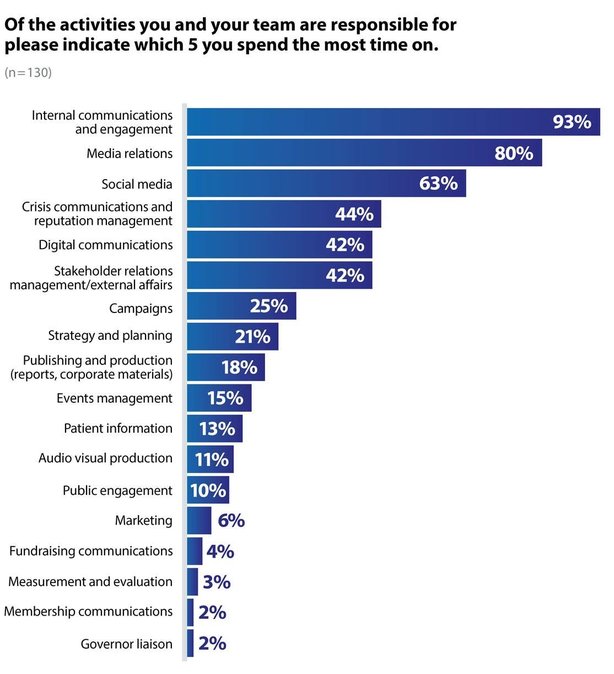 The survey asked comms chiefs to say whether their teams carried out one or more of 18 activities regularly, including media relations, social media, crisis comms, internal comms and stakeholder relations.

Of those surveyed, eight said they carried out all 18 activities, while the lowest was seven and the average was 14.

All respondents said they carried out social media and crisis comms for their trust.

Respondents were also asked how much of their time they spent on the 18 activities, with internal comms topping the list at 93 per cent, followed by media relations at 80 per cent and social media at 63 per cent.

Three quarters of those surveyed said they had noted a shift in comms priorities over the last 12 months towards growth areas in stakeholder relations and internal comms.


Daniel Reynolds, the report's author and directior of comms at NHS Providers, said: "This survey showcases the best of NHS communications but also shows the progress we need to make to elevate the communications profession into the strategic function we aspire it to be.

"Chief among these is showing more clearly the impact comms has on the patient experience, using evaluation tools to demonstrate return on investment, and working more effectively with local government communicators to engage with the public around the complex changes to local services that are needed."

The full 'State of NHS Provider Communications 2017/18’ report will be published on the NHS Providers website from 00.01 hours on Thursday 25 January