What is the PR structure at Domino’s Pizza UK and Ireland, and how do you work with the international business?

Nina Arnott, head of comms, Domino’s Pizza Group: We are divided into corporate and consumer PR, and there are seven people in the team throughout the UK and Ireland. Louise Butler is the senior consumer comms manager and Katie Walker-Arnott is the senior corporate comms manager.
Butler: Within the consumer team, we look after brand comms and digital integration, and promote and protect the brand. We also look after stores and promote the Domino’s growth story, which has seen the business grow to more than 1,000 outlets this year.
Walker-Arnott: In the corporate comms team we cover everything from internal engagement, reputation and crisis management to financial PR, capital markets and public affairs.
Arnott: We work very closely with our own international network of country managers and their agencies throughout Europe. We also have a relationship with the team headquartered in the US, but we are not accountable to them.

What is your PR agency set-up?

Butler: On the consumer side in the UK, we work with Shine Communications, which handles our proactive consumer campaigns. In Ireland we work with Harris PR, which has been with us for nearly a decade.
Walker-Arnott: Maitland supports on corporate and financial PR, capital markets and public affairs in the UK, while in Ireland we use an agency called MKC, which handles corporate and public affairs work.

What traits must an agency have to win your business?

Arnott: Domino’s is a fast-growing and lean business and, as such, we expect incredibly high standards; but part of our job is to set up our agencies for success. Katie, Louise and I have all worked agency-side and we think it important to understand what it’s like on that side of the industry, because so many people in-house don’t have that insight. We understand how demanding it can be agency-side, and when our agencies do well, we reward them. We want to be the account everyone wants to work on.
Walker-Arnott: We look for them to have great creative ideas and deliver them – on both the consumer and corporate side. We also expect our agencies to work seamlessly together, and we meet up regularly to ensure those relationships are strong.

What are the most common media queries you get?

Butler: Several times a day, the main query we get is people asking when a new store is opening. After that, it’s about product innovation and free pizza requests – particularly from celebrities, though I couldn’t possibly reveal which ones.

How do you communicate with franchisees?

Arnott: The vast majority of Domino’s stores are franchised, and while we talk with franchisees every day, we meet with a representative group every six weeks on a more formal basis, and we meet with them on a semi-formal basis twice a year, where we talk about our annual plans. They hold us accountable and have very high standards. 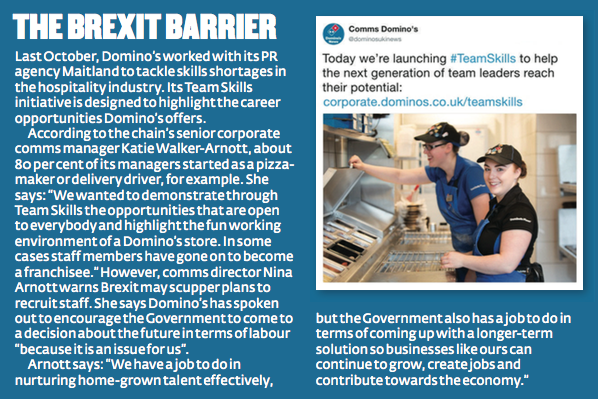 How do you handle negative press?

Walker-Arnott: If a piece of coverage is negative, we always ensure it is accurate. If there are any inaccuracies, we put in a call in to get it corrected.

Butler: However, we work hard to build strong relationships with key media contacts, so when a story is inaccurate, it is usually just a case of speaking to someone you know to address the situation.
Arnott: Less that 20 per cent of all our coverage is negative, and that’s considering we get thousands of pieces of coverage a year. We hold ourselves accountable to influence coverage, meaning we set targets to influence a certain ratio of coverage; so even if it’s negative it carries Domino’s reaction.

How do you feel the media treat you in general?

Arnott: We have a very good relationship with the press and it’s something we have worked very hard at. We get out there and meet journalists, because those relationships are very important. Media relations is still very important. We have great stories, but when things go wrong we are straight and honest about doing better – I think journalists respect that.

How do you communicate Domino’s message on health and balanced diets?

Butler: It comes down to transparency and making information available about our products – such as nutritional information and providing choice to our customers.
Walker-Arnott: We also maintain an open dialogue with Public Health England (PHE) and always keep our finger on the pulse about what it is doing. PHE is also kept aware of what we are doing with product development.
Arnott: We have also slowly been reformulating some products over a long period. People eat Domino’s on average every 36 days and we recommend a serving of three slices. The great thing about pizza is that it is there to be shared.

What has been the biggest change in your PR strategy recently?

Butler: Increasingly we work with influencers, who are playing a bigger play role in terms of the collaborative work we do. We recently worked with comedian and impressionist Al Foran for a campaign, seeded initially through social media, that involved ordering Domino’s via Amazon’s Alexa.
Arnott: The great thing about comms people is we are used to earning our coverage and talking in a tone of voice that is not too commercial. Earning coverage seems a bit more credible than the traditional advertising model and I think that’s where PR has a really strong role to play in working with influencers and on social media.

Is there a formula to finding the right influencers?

Butler: Yes. We look at each campaign, understand what the comms objectives are, what the area of interest is, and then research the best influencer in that field.
Walker-Arnott: It’s a lot to do with the brand fit as well. Domino’s is such an iconic brand – we need to be working with the right people who fit with our brand and bring our brand values to life. Influencers also have to be fun, innovative and not take themselves too seriously.

How will your comms approach evolve in the coming years?

Arnott: We are very focused on reputation from the inside-out because Domino’s is undergoing a period of great growth. We expect to open about 600 new stores in the UK and Ireland in the next few years. That will mean an additional 21,000 jobs, which makes us a big player. The in-house comms team plays a leading role in guiding the business through that period of growth by doing the right thing and being seen to do the right thing. That’s what reputation from the inside-out is all about.