A much-anticipated contest featuring PRWeek's five favourite festive campaigns was convincingly won by frozen food supermarket Iceland. Its tongue-in-cheek campaign, which hits on the trend of families filming each other unwrapping Christmas presents, garnered 410 of the 762 votes cast.

In second place, with more than 120 votes, was Marks & Spencer's festive caper that sees Paddington Bear unwittingly thwart a burglar and save Christmas for his family and neighbours. Greenpeace's take on the iconic Coke ad was third, with 113 votes. 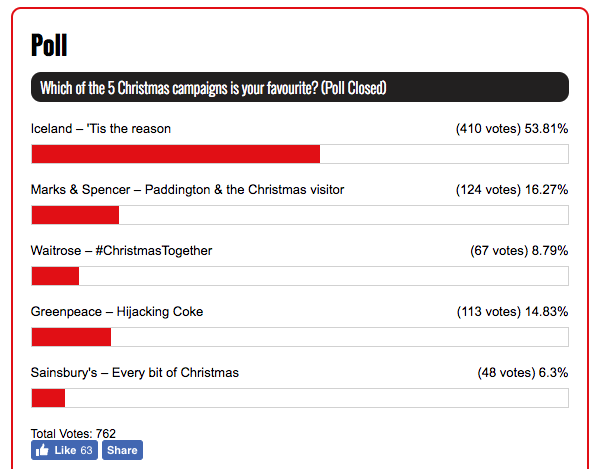 Iceland's tongue-in-cheek campaign hits on the trend of families filming each other unwrapping Christmas presents. Nine versions of the below film have been created, with each humorously edited to show people unwrapping the supermarket's range of Christmas food.

Mel Matson, marketing director at Iceland, said: "This Christmas we decided to go against the 'tear-jerking blockbuster' grain with lots of ads that will hopefully make people feel jolly this Christmas."

According to social media monitoring tool Brandwatch, campaign mentions between 5 November and 4 December were 85 per cent positive.

Read next: Five festive campaigns we liked in 2017