The accounting firm's annual benchmarking report looks at the most recent annual results of 40 of the UK's largest PR firms (see note at end) to check the financial health of the industry.

Kingston Smith's report says: "Our benchmark analysis suggests that a well-run consultancy should typically be posting fee income per head of between £100,000 and £120,000."

Axicom again achieved the highest operating profit-fee income margins, at 40 per cent, up from 35.6 per cent last year. Second-placed Freuds' margins were also up by four per cent, to 34.8 per cent, while in third place, Portland's margins remained flat at 31 per cent.

This is the third consecutive year for which margins have increased at the Top 40 firms - the average across the board was 13.2 per cent.

However, margins remain lower than levels seen in the 2008 and 2009 reports. Given the lag between year-ends and the date Kingston Smith publishes its reports, the '08 and '09 editions reflect agencies' positions immediately pre-recession.

Elsewhere, margins at the top ad agencies improved to 10.4 per cent, reports PRWeek sister title Campaign. Media agencies' margins meanwhile were 15.5 per cent, compared with 14.3 per cent for design, 9.1 per cent for digital and 11.4 per cent for marketing and sales promotion. 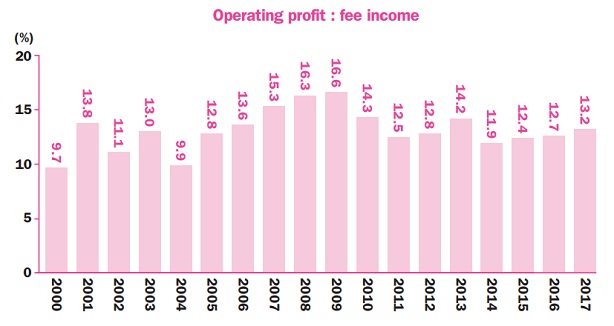 Note: which firms are included?

Kingston Smith's Top 40 does not include agencies such as Brunswick, Finsbury, Cohn & Wolfe and MSLGroup, generally because their accounts are integrated into a broader group structure, meaning it is not possible to separate the results into PR-specific detail.

This year, the Top 40 no longer includes Lewis, WE and PPS, which have been overtaken by other agencies. Also excluded are the now defunct Bell Pottinger; or Fishburn, which formally merged into FleishmanHillard at the start of 2016. The five new entrants are Premier, M&C Saatchi PR, Camargue, Inventiv Health and Speed.