News
Tweet
Share
National counter-terrorism officers have decided to adapt the increasingly well-known ‘Run Hide Tell’ campaign to reach young people aged 11-16, following the launch of a fresh iteration of the hard-hitting film in the summer, which was aimed at British holidaymakers.

Young people have been increasingly caught up in acts of terrorism this year, including at the bombing of the Ariana Grande concert in Manchester, in which the youngest victim, Saffie Roussos, was eight years old.


Manchester was a game-changer with regards to targeting young people…we felt we had a responsibility to try and educate them in the same way we’ve been doing with the rest of the population.

Chris Taylor, counter terrorism media officer at the National Police Chiefs’ Council, told PRWeek: "Manchester was a game-changer with regards to targeting young people…we felt we had a responsibility to try and educate them in the same way we’ve been doing with the rest of the population."

It is the first time that the police have tried to craft a counter-terrorism messaging campaign aimed at a younger audience, but they think it is crucial to kick-start an uncomfortable, but potentially life-saving, conversation between young people and their parents in order to keep them safe.

In order to adapt the existing messaging to suit 11-16s, the NPCC first carried out research of its target demographic to find out what they thought of the existing campaign and messaging, as well as their preferred channels for receiving news and information.

Feedback was that young people wanted simple messaging with ‘Run, Hide, Tell’ to be prominent, because it was easy to remember.

This research prompted security experts at the National Counter Terrorism Security Office to re-write the messaging in order to tailor it to what young people said they wanted.

Young people told researchers that celebrities on social media were key influencers in their lives and that more than three-quarters of them got their information from social media accounts such as Snapchat and Instagram, while few used news apps. 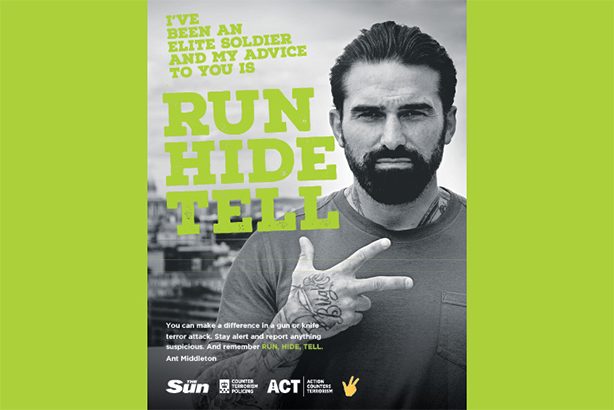 Taylor said: "We realised that if we wanted to reach this audience, we would have to change the way we were putting this messaging out there."

But a disturbing trend also emerged from the research, which was that young people thought they would be helping the police by standing by and filming a terrorist incident as it unfolded.

Taylor said adults had also made this mistake during the Parsons Green tube bomb attack last month in which people were seen filming the potentially deadly device, which only partially detonated, through the windows of the tube carriage.

Taylor said: "That really opened our eyes to the fact that we need part of this campaign to teach young people that isn’t safe to do. [The Parson’s Green bomb] could have easily gone off while those people were hanging around filming and we have to express to young people, particularly in this campaign but the wider population too, that hanging around and filming is never a good idea. You have to keep yourself safe and put as much distance as you can between yourselves and a possible incident."

Phase one: The Sun and celebrity influencers 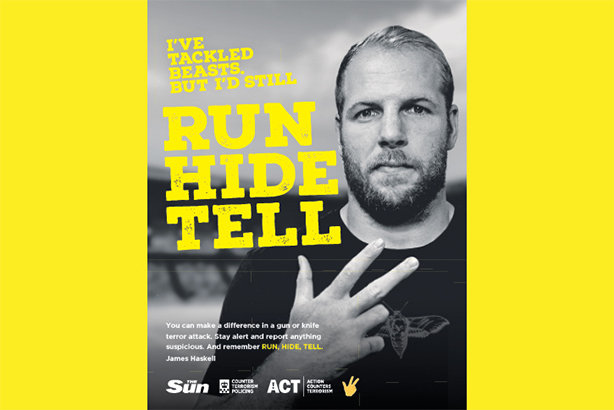 The results prompted the idea of a partnership with the Sun, which has 1.3 million followers of its Snapchat channel aged 13-17 years old, and the ability to help enlist celebrity influencers, including adventurer and Chief Scout Bear Grylls, England Rugby star James Haskell and taekwondo athlete Jade Jones.

Taylor said: "Our collaboration with the Sun allowed us to reach a celebrity influencer that we wouldn’t traditionally have been able to reach."

Following the initial push on Snapchat and Instagram with the Sun, which began late last week, the campaign now aims to get young people noticing ‘Run, Hide, Tell’ messaging during October.

A short film (below) featuring all the celebrities involved in the campaign has been put together, which is on YouTube and can be shared across social channels. The film has already reached more than two million people via counter terorism police channels alone, including Twitter, Facebook and YouTube.

Police are also currently working on producing an animated film, to be released around the end of the month, which will expand on the core messaging and tell children how to spot suspicious behaviour and who to report it to.

After the animation is released, the campaign will move into a new phase by rolling it out to youth organisations including the Scouts.

Taylor said: "Bear Grylls is a really key influencer for us. It’s fantastic to get him on board because he is Chief Scout. He’s given some fantastic support to this and we’re really grateful to have him on board.

Phase three: Putting the campaign on the national curriculum

Counter terrorism police have been in talks with officials at the Department for Education to put the animated film and an accompanying lesson plan delivered by trained teachers on the secondary schools curriculum for 11-16-year-olds by next year.

The plan is to make the film and classroom discussion part of the citizenship curriculum’s Personal, Social, Health and Economic (PHSE) lessons.

Secondary schools will decide what age pupils should be before they are given the lesson.

Taylor said: "Children will hopefully already be familiar with the messaging. Teachers will have a conversation with kids as part of that lesson and talk about the threat: How people feel about the threat of terrorism, do they feel safe and do they know what they should do if they see a terrorist act take place? What’s your first instinct? If you can’t run, what do you do? When do you tell people that you’re safe?"

It’s like a bottom-to-top model in that we’re hoping kids will go back from these lessons and talk to their parents about it.

Taylor said the curriculum plan also had the potential to further educate parents.

He added: "It’s like a bottom-to-top model in that we’re hoping kids will go back from these lessons and talk to their parents about it. This is something where they can pass learning back up to their parents, if they haven’t already talked about it from the top down. It’s about making sure that everybody has got the information and knows what to do in an emergency. There won’t be an end date to this campaign. This is something we want kids to engage with going forward."