After a series of dramatic tweets last week described the hurricane hitting Saint Maarten, he was silent for several days, before confirming he had been evacuated on Saturday evening (local time).

Just been airlifted off #StMaarten by @usairforce to whom I owe my life. Thx so much for prayers & msgs. Safe at last pic.twitter.com/3pGpJqOSzZ

The PR consultant has worked for himself since 2012, with clients including Coca-Cola, L'Oréal, Roche, Bentley Motors and The Body Shop. Prior to this, he specialised in crisis and issues management.

Woolfall's Twitter feed suggests he arrived in the Caribbean a few days prior to the hurricane having been elsewhere in North America, but had planned to leave the island as the storm arrived on Tuesday.

Sandbags, windows being boarded up & Category 5 #IrmaHurricane on its way. Stuck in Leeward Islands for the next few days so time to hide. ?? pic.twitter.com/q7Qc7DAWhz

In tweets published during Tuesday night and Wednesday morning, he described being evacuated and taking cover in a concrete stairwell as the hurricane hit Sint Maarten. In further dramatic descriptions he talked of "thunderous" and "apocalyptic" noise, said he was "terrified" and asked Twitter users to "pray for me", saying the scene was "like a movie I never want to see". 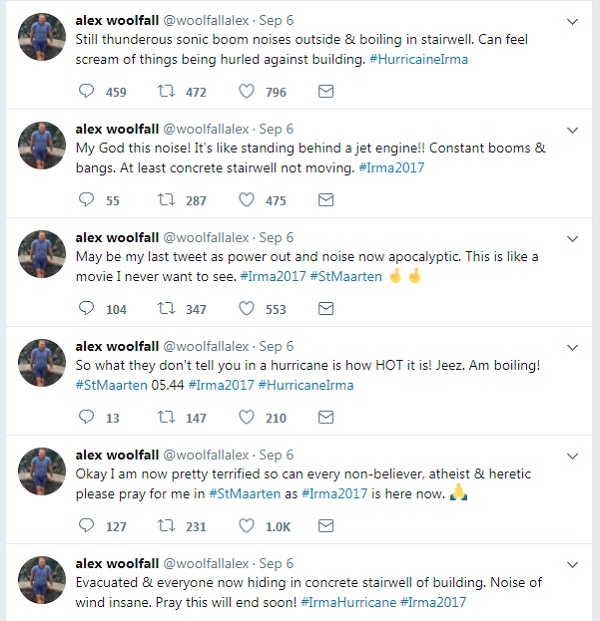