Oh to be a fly on the wall in the Trump household next time the family gathers together for a meal (if they do that sort of thing).

These were protesters who in unison chanted "Jews will not replace us," among other disgusting racial epithets. They also gave sieg heil Nazi salutes and shouted "Hail Trump!"

I wonder what Trump’s daughter Ivanka, who converted to Judaism before she married Jared Kushner in 2009, would say to her father about this over the dinner table.

On Saturday, lest we forget, one of the neo-Nazis mowed their car into a group of anti-fascist demonstrators, killing 32-year-old paralegal Heather Heyer and injuring 19 others. Many more could have perished had not 20-year-old James Field Jr.’s car crashed into another vehicle, slowing his deathly progress through the crowd. 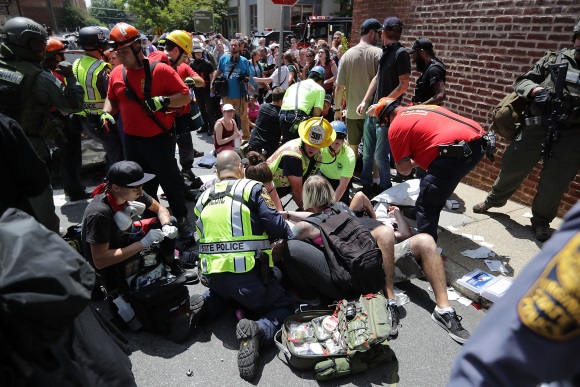 Speaking from his New Jersey retreat on Saturday, Trump said responsibility for the weekend’s violence lay on "many sides," initially refusing to reference the white supremacist groups involved by name. On Monday, a more measured, scripted statement by the president from the White House attempted to quell the negative response to his earlier comments.

But by Tuesday Trump was back off script and riffing freestyle in his inimitable way. This press conference moved former Imperial Wizard of the Ku Klux Klan David Duke, who attended the Unite the Right rally, to tweet, "Thank you President Trump for your honesty & courage to tell the truth about #Charlottesville."

Klan members used to wear hoods to disguise their identities, but the white supremacists marching in Charlottesville were brazenly showing off their faces in full view of onlookers and watching cameras, which led to some of them losing their jobs when they returned to work on Monday.

Anyone who watched Vice News’ documentary on the rally, the best piece of journalism produced about this intensely troubling weekend, would struggle to equate Trump’s "fine people" description of these participants in the extremist Unite the Right rally with reality.

Reporter Elle Reeve showed extreme courage in fronting a stunning piece that pulled off the cover of hyperbole surrounding the story and told the raw truth without resorting to partisan commentary or heavy editorializing.

The film simply let fascists including Radical Agenda host Christopher Cantwell, Duke himself, and Nazi website The Daily Stormer writer Robert Ray state their case – stripped bare and revealed in all its disgusting bile and hatefulness.

Cantwell’s claims during the film that the "president let a Jew steal his daughter" and "we’re not nonviolent, we’ll fucking kill you if we have to," and the final scene when he proudly shows off his military-style hardware, including two AK-47 rifles, three pistols, and a knife, were simply chilling - though the irony of him blubbing like a baby when threatened with arrest on a video circulating on social media later in the week was not lost on many observers.

The Vice team’s piece achieved more in 20 minutes than thousands of hours of broadcasting and millions of words on the subject elsewhere. In a world where waving a cellphone at live events and recycling endless talking heads on 24-hour cable news has become the bellwether of modern news coverage, it was a refreshing return to proper journalistic values and brave reporting.

Many worrying questions were raised by the weekend's events, not least of which was why it took police so long to mobilize when it was obvious the rally was quickly going to degenerate into chaos.

It is tempting to compare what happened in Charlottesville with the police's military-style response to a protest in Ferguson, Missouri in 2014 following the killing of Michael Brown by a law enforcement officer. And would police react in the same way if participants in a Black Lives Matter march pushed back on police lines in the same way the white supremacists did in Charlottesville last weekend.

Trump, whose father Fred was allegedly arrested at a Klan rally in Queens, New York in 1927 – a charge his son denies – has had an extraordinary week even by his super-extraordinary standards.

He has managed to alienate any remaining support and goodwill from multiple stakeholders. His chief of staff General John Kelly, looked on balefully at Trump’s press conference performance in Manhattan, suggesting initial progress in bringing some discipline to the administration was crumbling before him courtesy of the man at the top of the rickety White House structure.

Initially praised for raising the profile of business on the government’s agenda, Trump’s astonishing performance led to the disbanding of the White House Manufacturing Council and Strategy & Policy Forum as most of the company CEOs involved proactively pulled out and released statements condemning the president’s position. The White House pulled the plug on the president’s Advisory Council on Infrastructure soon after.

Denise Morrison, CEO of Campbell Soup, initially stuck with the president following his "many sides" comment on Saturday, but Tuesday was the final straw.

"Racism and murder are unequivocally reprehensible and are not morally equivalent to anything that happened in Charlottesville," she said in a statement. "I believe the president should have been – and still needs to be – unambiguous on that point. Following yesterday’s remarks from the president, I cannot stay on the Manufacturing Jobs Initiative."

It has been remarked this week in more than one place that business leaders are doing more to take a stand on the extremism on display in Charlottesville than politicians, especially members of Congress. While cable channels found it almost impossible to find a senator willing to be interviewed about the president, most of these same individuals kept their counsel instead of releasing public condemnation similar to the business community.

CEOs initially thought it would on balance be better to be inside the tent trying to influence policy rather than staying on the outside and risking the opprobrium of President Trump. But Tuesday’s statement was a step too far for them and many of their employees, who expect their leaders to stand up for what is right and responsible.

It puts certain businesses in a difficult position, especially those that rely on big government contracts for their wellbeing, but sometimes you just have to take a stand.

The nominal reason for Saturday’s rally was to protest the city’s decision to take down a statue of Confederate General Robert E. Lee in Charlottesville’s Emancipation Park. The Confederates were pro-slavery and seceded from the Union following the election of Abraham Lincoln – ironically a Republican – on a ticket of opposing the expansion of slavery.

There are still hundreds of memorials in public places in the U.S. to Lee, another Confederate general - Stonewall Jackson - and other secessionist leaders. But even the families of Lee and Jackson believe the time has come to take these down and move them to more appropriate venues where they can be placed in historical context, such as museums.

However, back in New Jersey on Thursday, President Trump demurred via his favorite platform, Twitter, proclaiming: "Sad to see the history and culture of our great country being ripped apart with the removal of our beautiful statues and monuments," and "you can't change history, but you can learn from it."

On that latter point, maybe the president should have studied – and learned from - the rise of fascism in the 1930s that led to the Second World War, but that’s for another day. 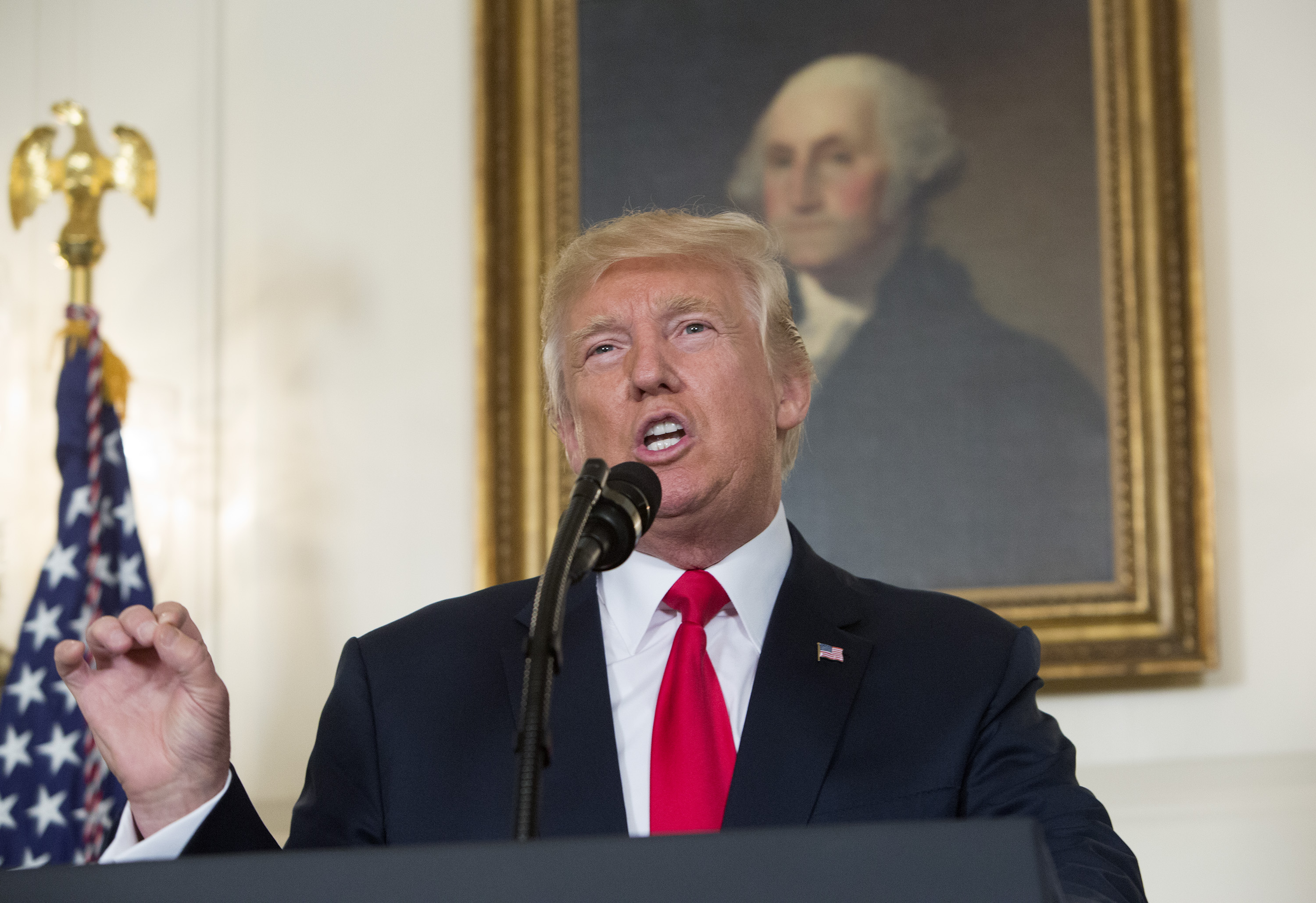 Historical resonance aside, the Vice film showed the Robert E. Lee statue issue was really a sideshow for the neo-Nazi protesters. Rather, this was a long-planned show of strength aimed at achieving political aims designed to bring their far-right ideology into the public eye and mainstream debate.

From thugs such as Cantwell via long-standing fascists such as David Duke through to the preppy elite led by figures such as Richard Spencer, this was the white supremacists’ coming out party on a trail to what they hope will be mainstream influence.

One American died in Charlottesville on Saturday and one American was among 14 people who died in Barcelona in Spain on Thursday. They were both mown down by extremists using vehicles to maim and murder innocent people. They were both killed by terrorists - plain and simple.

Yet despite everything that has gone on this week, an Axios poll showed 40% of respondents agreed with Trump’s assertion that both sides were equally to blame for the events in Charlottesville. Axios’ Mike Allen suggested: "These findings reflect the fact that, because of the nation's partisan divide and fractured media, we no longer agree on basic facts. That makes civil debate impossible."

It also indicates that CEOs and business taking a lead is not quite as simple as it sounds. Edelman’s Trust Barometer this year found that "people are more likely to work and stay at companies that share their values and have leaders that will take the risk of advocacy."

But most large companies contain employees of all political shades and social hues. Bringing those differing viewpoints together and leading your organization through a reputational lens of authentic and transparent values is a tricky tightrope to walk.

An Edelman poll this week of 1,000 people backs this up. It found 52% of respondents expect CEOs to speak out against the president’s policies and views when they are inconsistent with company values, while 25% would prefer CEOs to remain silent.

Thirty-eight percent say their trust in a company would decline if the CEO continued to work with President Trump, but 25% say trust would increase by working with the president.

We need to return to an environment where people can agree to disagree but still exist in a society of tolerance, compassion, and diversity that has a basic level of common ground that unites us. Hate and bigotry have no part in these common values, and the leader of the country has to be a prime mover in reinforcing that.

That is what is great about America and what made it great in the first place. Business must also continue to play its part in reinforcing those values upon which this country was built.

We can only hope, but in my opinion that would be a much better subject matter for a conversation around the dinner table at Trump Tower.