With more than half the votes, the much-anticipated contest featuring PRWeek's five favourite campaigns in July was comfortably won by the 'wasteland warship' by Surfers Against Sewage (SAS), a behavioural change campaign run by M&C Saatchi PR for the environmental charity, which highlighted the danger that single-use plastic poses to the world’s oceans.

In second place was easyJet's 'flybrary', a campaign run by Taylor Herring to get more children reading throughout the summer holidays; and in third, #SoaplandSecurity, a classic piece of news generation run by agency Unity for client ADT. 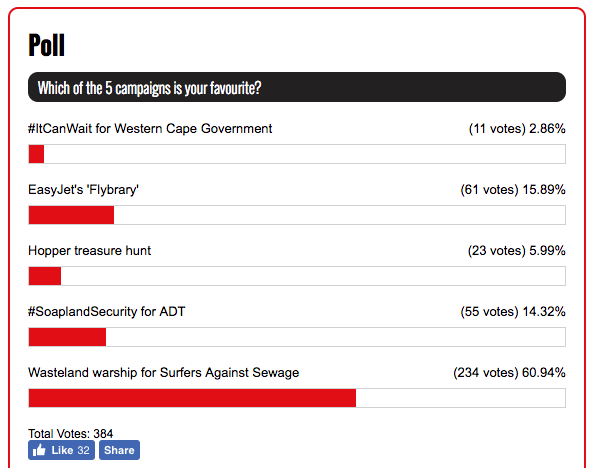 Wasteland warship for Surfers Against Sewage

Artist James Summers created a 30ft ‘warship’ made up of over five tonnes of plastic waste collected from beaches around the UK. The ship was unveiled at Marazion beach in Cornwall and will travel around the country – including to Boardmasters Festival in August and the political party conferences.

The campaign also calls on the public to ‘Join the Resistance’ in the fight against ‘Wasteland’, a name given to the growing mass of marine plastic that can be found in the Pacific. SAS hopes to get 50,000 people to sign up. Those who do will receive an ‘action pack’ designed to help stop plastic pollution.