This is according to a Instinctif Partners report entitled 'Fake News: Can it save the traditional, mainstream media?', which is based on the findings of a survey of 2,000 adults.

Two-fifths (39 per cent) of respondents to the survey said that they were now more wary of clicking on stories from non-traditional stories, while a further third (35 per cent) said they already were wary, with the rest saying they have either become less wary, or never were wary. 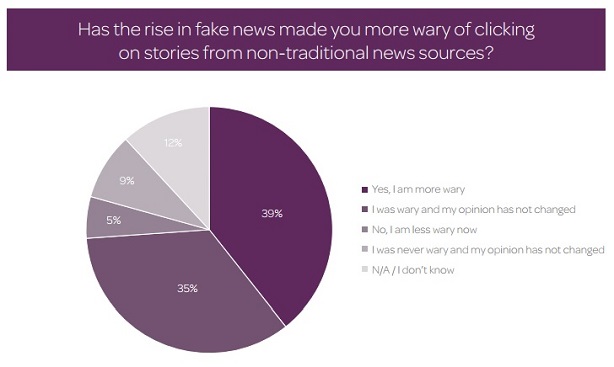 In addition, 61 per cent of respondents said that the increased awarness of fake news had highlighted the need to get news from a "source with a large news team dedicated to finding out the truth", while just seven per cent disagreed.

Asked how trustworthy they thought various sources of news were on a scale of one to five, radio came out on top, just ahead of TV. Scores given were:

The report contains a number of suggestions for how society should deal with fake news, including digital channels allowing users to flag up suspected fake news, traditional media taking the moral high ground by not producing clickbait and the Government either creating a database of fake news sites or creating tougher regulation for social media.

However, the report concludes by asserting the suggestion made in its title that fake news is good news for old media outlets.

It says: "By highlighting the long-established strengths of traditional media outlets – the origination of quality, fact-checked, well-regulated journalism over automated clickbait – fake news has presented old-school broadcasters and newspapers with an opportunity to rebuild and re-establish themselves in the face of intense competition from search engines and online social media and social networking services."

Polling for the report was carried out in May by OnePoll via online and mobile.