The low-budget campaign, which cost £8,500, is entitled ‘Not an Ambulance’ and encourages people to look after their friends if they have drunk too much.

It is primarily comprised of a 90-second film, launched on YouTube last week and then propagated across social and traditional media channels, including the LAS Twitter account and coverage in the Evening Standard.

In its first three days, the film achieved more than 48,000 views, around half of those on Facebook.

LAS figures show that more than 6,650 people were treated by ambulance crews after drinking too much last August, compared with fewer than 6,000 in December the same year.

The emergency service analysed its callout figures and will particularly target the London boroughs, including Westminster, Camden and Lambeth, which generated the most alcohol-related incidents in 2016.

The film is shot as if on smartphone camera and portrays friends sharing an evening out in a pub after which one person stumbles out of the venue alone and confused. He is later found slumped against a wall by an ambulance crew before the film rewinds and his friends retrieve him instead. The tagline reads: ‘He needs his friends. Not an ambulance.’

The idea was developed by LAS following consultation with groups of men in their 20s.

LAS said the campaign objectives were to deliver a five per cent reduction in alcohol-related callouts during August and to encourage 100,000 men within the target audience to engage with the campaign, with a ‘like’ or a click-through from paid-for social channels.

Another objective is to get 1,000 people to download a taxi code so they can get home safely without an ambulance, as well as to engage 10 key stakeholders, including media outlets consumed by the target audience, to support the campaign by using their own channels to promote it. 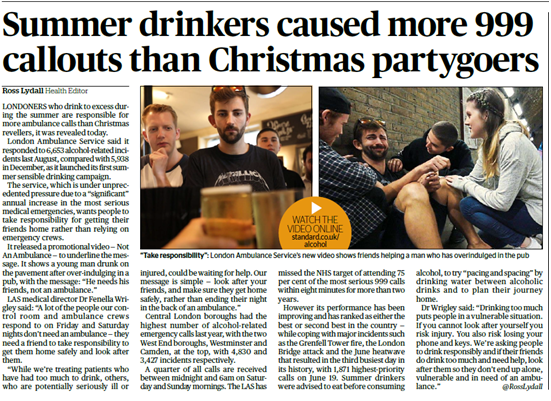 LAS said it would extend the campaign by offering observer shifts to targeted media and run live social media events from its control room and events such as the forthcoming Notting Hill Carnival.

It will also use internal comms to gather staff opinions on alcohol-related incidents and use this to generate further coverage, as well as working with the NHS in London to create additional shareable content for the campaign.

Dr Fenella Wrigley, LAS medical director, said: "We’re asking people to drink responsibly, and if their friends do drink too much and need help, look after them so they don’t end up alone, vulnerable and in need of an ambulance. A lot of the people our control room and ambulance crews respond to on Friday and Saturday nights don’t need an ambulance – they need a friend to take responsibility to get them home safely and look after them. While we’re treating patients who have had too much to drink – others, who are potentially seriously ill or injured could be waiting for help."