Among a series of issues including how football gaming can help grow the sport, the report focuses on the marketing use of pre-season tours (see image below) and how Europe's elite football clubs can attract and retain new international fans. 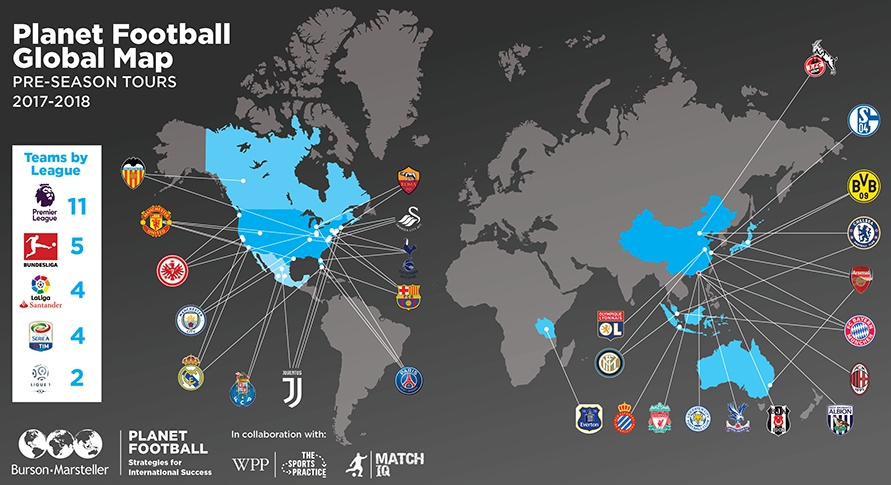 It includes contributions from a number of sports industry professionals, including Raymond Boyle, a sports communication professor at the University of Glasgow.

Boyle argues that a club's communications should focus on a "longer-term vision" to engage international fans. He says short-termism would only draw limited success.

Boyle says: "In a communication-rich age where information, news and entertainment can be accessed through multiple mobile devices, understanding the centrality of communication is vital in building long-term sustainable international relationships."

Boyle warns that if a club's sole motivation was to "sell more football shirts", it would not benefit from deep relationships with new fans. He also says elite clubs eyeing global expansion must still have a "local" feel.

He says: "Digital communication offers the possibility of making the global fan feel more local and projecting your important local fan culture globally. There is also a key role to be played by players, coaches and managers as they communicate the values of the club through the myriad of media and social media platforms."

Boyle adds: "People may love a club but that relationship is enhanced and deepened through the stories told by sports people and their ability to communicate and connect with fans."

Boyle also says there had been "a profound shift" away from unidirectional communications, saying this had been replaced with "nimble, agile and responsive" comms strategies.

"Investing in this key part of your organisation is crucial in building international and long-term relationships for any sports organisation in this age of global sport," Boyle said.

William Gaillard, former UEFA comms director and senior sport adviser at Burson-Marsteller, writes in the report that the process of international expansion "is an unstoppable force and the status quo is not an option".

Gaillard said: "Embracing the new realities and engaging with the new opportunities is a strategic imperative for all decision-makers in the industry."

Read next: Floyd Mayweather vs Conor McGregor: comms has 'turbo-charged' interest in fight