If the slogan wasn’t taken, Bacardi-Martini global head of brand PR and corporate comms Lisa Jedan’s mantra could be ‘Just do it’.

Take influencer marketing: "Maybe the current way we use social-media influencers will burst, but it will just turn into something else. My point of view is: you could choose to ignore it, or not engage, but I’d rather be in the playground with everybody else than standing outside the playground, right? Jump in."

Her willingness to do so, combined with her analytical approach to marketing and comms, shows Jedan is keen to be ahead of the curve.

We meet shortly after Jedan gave an energising keynote speech at PRWeek’s PR360 conference in London in which she challenged the industry to "be brave". Her passion for the topic is no less evident as we sip Bacardi cocktails (what else?) at the company’s London office. The eloquent Canadian, in effervescent form, discusses the future of brand comms with forthrightness and humour, challenging some received wisdom and explaining how PR can thrive in these changing times.

After a period of stagnant sales, Bacardi, the family-owned spirits group with a 200-plus brand portfolio encompassing Grey Goose vodka, Bombay Sapphire gin and its eponymous rum, has a new strategy to engage consumers, led by chief executive Mike Dolan, who joined in 2014.

In 2015 Bacardi created two ‘centres of excellence’ in North America and Europe, each led by a chief marketing officer reporting to Dolan and regional presidents.

"It’s a case of ‘Let’s just change this up because whatever we’re doing isn’t working’," says Jedan, who joined Bacardi in 2014. "I think we’ve done really well since [Dolan] has been our fearless leader."

Previously, it was about "creating tension between brands", she says, highlighting the Pepsi/Coke challenge of the 1980s. But a new era requires a new approach.

"One of the resources that everyone is lacking now is time. How can we be part of [consumers’] lives as they’re living it, instead of disrupting it all the time, or shouting at them all the time?" she asks. "If we went to a party and you walked into the kitchen and there was a group of people talking over here, and they’re all engaged, and laughing, debating and having a good time, you could choose to join that conversation. Or you can go stand on the opposite side of the room and yell at them: ‘Hey everybody, I’ve got this other thing over here!’

"That’s my analogy for what this means. It’s about becoming part of their life, rather than completely disrupting their life and trying to get their attention."

This principle is embodied in Bacardi’s No Commission initiative, through which the brand seeks to deepen its links with the arts. Launched with US rapper and producer Swizz Beatz – now Bacardi’s global chief creative for culture – the project involves the brand hosting art and music events, with all proceeds from the sale of the artworks going to the artists. The experiential platform made its debut in Miami in 2015 and has expanded to London, Shanghai and Berlin.

Jedan declines to give figures, but says Bacardi’s brand equity and intent-to-purchase scores both increased after the events.

Bacardi’s sponsorship of the Williams Formula One racing team, now in its fourth year, also illustrates the new approach. Early in the sponsorship, activities typically involved inviting journalists and influencers to a race or a car reveal.

Things are different now, as Jedan explains. "It’s not enough to simply take people to an event any more. You need to shape and form the narrative and stories that can bring it to life and make it relevant to them. And when you can make your brand relevant to your consumer, then your brand is going to matter. That’s the entry point for being part of somebody’s life and being part of the conversation."

Bacardi now uses SEO research and media coverage to focus content and activities on topics that people are already talking about.

"For example, this year we’ve noticed there’s been a lot of conversation around losing the love and passion for racing. It’s something that’s close to our heart and very authentic to our brand. Being authentic is very important for every brand."

Ah, the ‘a’ word. At a time when even a whiff of bandwagon-jumping can leave brands fighting a rearguard action, the appearance of authenticity is crucial. Its lack in the much-maligned Pepsi ‘protest’ campaign featuring Kendall Jenner was clearly a big reason for its downfall.

"I think it was a great idea, perhaps executed not as well as it could have been," says Jedan, diplomatically, of the Pepsi campaign. "The reason why things like No Commission and racing have performed so well for our brands is they’re authentic and true to our history: who we are, what we stand for, what we believe in and what we want to give back. I’m very lucky with our brands – I don’t have to make anything up." 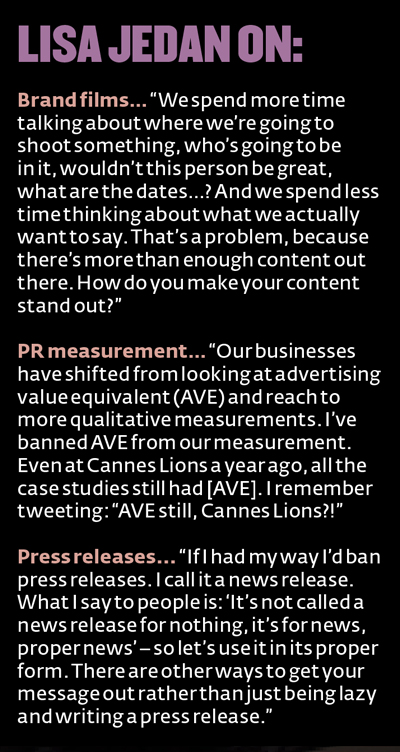 The balance has shifted in Bacardi’s marketing mix over recent years. In the US, year on year, 20 to 30 per cent of the budget has moved away from TV into consumer data and social media. This reflects a move away from traditional advertising and the emergence of multichannel integrated campaigns like No Commission and the racing activity.

"That’s where PR is," says Jedan, intriguingly. "I don’t think PR is just ‘earned’ any more. Modern PR works across paid, owned and earned, full stop. If an influencer is identified by the PR team because they can land in earned media, they have earned media value – that influencer will also work across paid and owned. Nobody owns the channel any more; just the disciplines and how you approach those channels is a little bit different."

Bacardi’s agencies are briefed at the same time ahead of the launch of a creative strategy, suggesting a move toward creative meritocracy between the disciplines.

"I don’t need a bunfight between advertising and digital and PR," Jedan insists. "There’s enough money for everybody. That’s why the idea has to lead the process, and the idea should come from anybody. That’s why having PR in the room from the very beginning is so important."

She rejects claims that advertising is dead – "everybody who watches the Super Bowl knows that [it] is still very much alive" – and "strongly believes" in a mixed-discipline approach. But PR has a unique opportunity to stake its claim, she argues – if it can define its role.

"It’s the most exciting time for PR, but people are still not sure how to use it," Jedan contends. "You sit across from the PR agency and they don’t know what to ask for, because it could be anything from a press release to a brand partnership, and anything in the middle. This puts PR in a unique, powerful position, but it’s also [potentially] our greatest weakness… because nobody knows what to ask for.

"Our strength [is that] we have always owned the brand narrative, and we’ve always been part of the news agenda, because we’ve had no choice, right? We’ve always had to go through our toughest critics – the media – to get something placed, or through an influencer to get them to talk about us."

Bacardi has consolidated its agency set-up in recent years, to suit its more global approach under the centres of excellence. Its agency roster has reduced from hundreds to a handful, with global creative duties moving to BBDO Worldwide and media handling to OMD Worldwide. Ogilvy PR won a new EMEA brief last year, replacing an array of agencies covering various brands and countries.

PR agencies perhaps play a bigger role at Bacardi than at its counterparts, given the surprisingly small size of its in-house function. In effect, Jedan is the in-house brand PR at Bacardi, with agencies acting as "my team". She is part of a "small but mighty" comms contingent of about 10, reporting to global chief comms officer KC Kavanagh (below), who has a direct line to the CEO. (In addition, some territories have PR professionals who report directly to the country managers.) 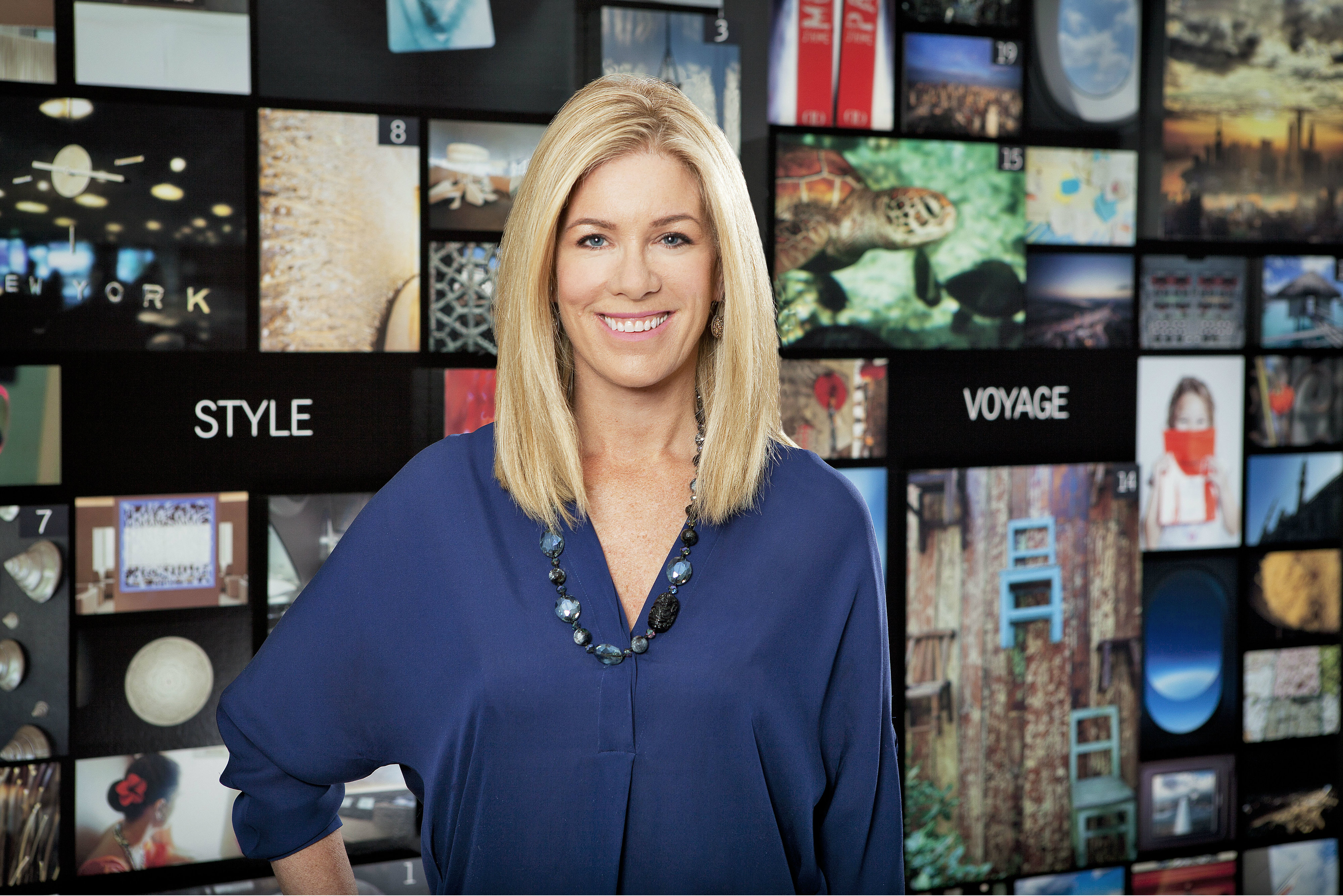 Jedan says Ogilvy PR was chosen for the way its different branches work together across the network, creating an aligned approach. PR agency consolidation has been less dramatic elsewhere. In the US, for example, the business uses three agencies for consumer PR: Harrison & Shriftman for the Bacardi brand, Nike Communications for Grey Goose and Day One for Dewers. "We’re not interested in one global agency. I like the tension," says Jedan. She laughs, although she means it.

Jedan’s insights have been gained over a 22-year PR career that started at brewer Molson Coors in Toronto. Yearning to work abroad, she moved to London with her husband in 2001, shifting agency-side to Ketchum – Carlsberg was an initial client.

This was followed by a stint as a director at Freuds, which she calls the "mothership". "Even though it was very UK-centric, I did work on global pieces of business there. I went there to work in the corporate comms team, but with the energy of the consumer team."

In 2005 Jedan joined one of her clients, Product Red – the licensed HIV/AIDS fundraising brand co-founded by U2 singer Bono – as head of comms. She left when the company relocated to the US.

After this came "something completely different": running a theatre production company, which chimes with her creative outlook (Jedan has a "secret life" as a voiceover artist). She continued to work on PR assignments including ‘rock’n’roll’ projects such as the MTV Europe Music Awards and the Bacardi Triangle music festival in the Caribbean.

Those who know her say Jedan’s vast experience, go-getting attitude and charisma give her a unique perspective on her current role.

"Lisa is a driver," says Michael Frolich, EMEA chief executive at Ogilvy PR. "She knows exactly what she wants and how to deliver it, [and this] drives the best out of the Ogilvy teams in whichever country she’s operating in."

He adds: "Her previous experiences set her apart in this role, as nothing fazes her. She has seen and done it all before, which means she knows exactly how to support us – but, importantly, how to empathise and get the best out of us. This is massively valuable for both Bacardi and us.

"But in addition, Lisa is hardcore – she never gives up and has more energy than most, single-handedly delivering the PR efforts of the entire Bacardi brand portfolio for a couple of years."

Jedan has much on which to focus her energies in the months ahead. No Commission is to extend further, and she expects interesting initiatives around Williams, as new F1 owner Liberty Global looks to create more of a lifestyle racing brand.

Reacting to global drinks trends will continue to be a challenge; she highlights the decline of nightclubs and the growth of late-night dining.

Next April, Mahesh Madhavan, a 20-year Bacardi veteran and current regional president of Asia, Middle East & Africa, will take on the chief executive role. Could this herald another new approach for the business?

"Mahesh will be very interesting for us because he comes from emerging and ‘dark’ markets [where alcohol marketing is illegal]," says Jedan. "I think he’s going to bring a lot of that expertise and knowledge as we look at what the future of the company is and what markets there are."

Whatever happens, the importance of ‘jumping in’ will doubtless remain, as Bacardi and Jedan look to stay at the top of their game.

"I love my job," she enthuses. "There’s almost too much to do. You look around and say, "What can I work on today?’ Going into one meeting about Formula One racing, walking in to another about music, [then] into another about our whisky brands and all the awards they’re winning.

"You have to be able to pivot, turn and shift. I love that fast-moving energy. It keeps you on fire." 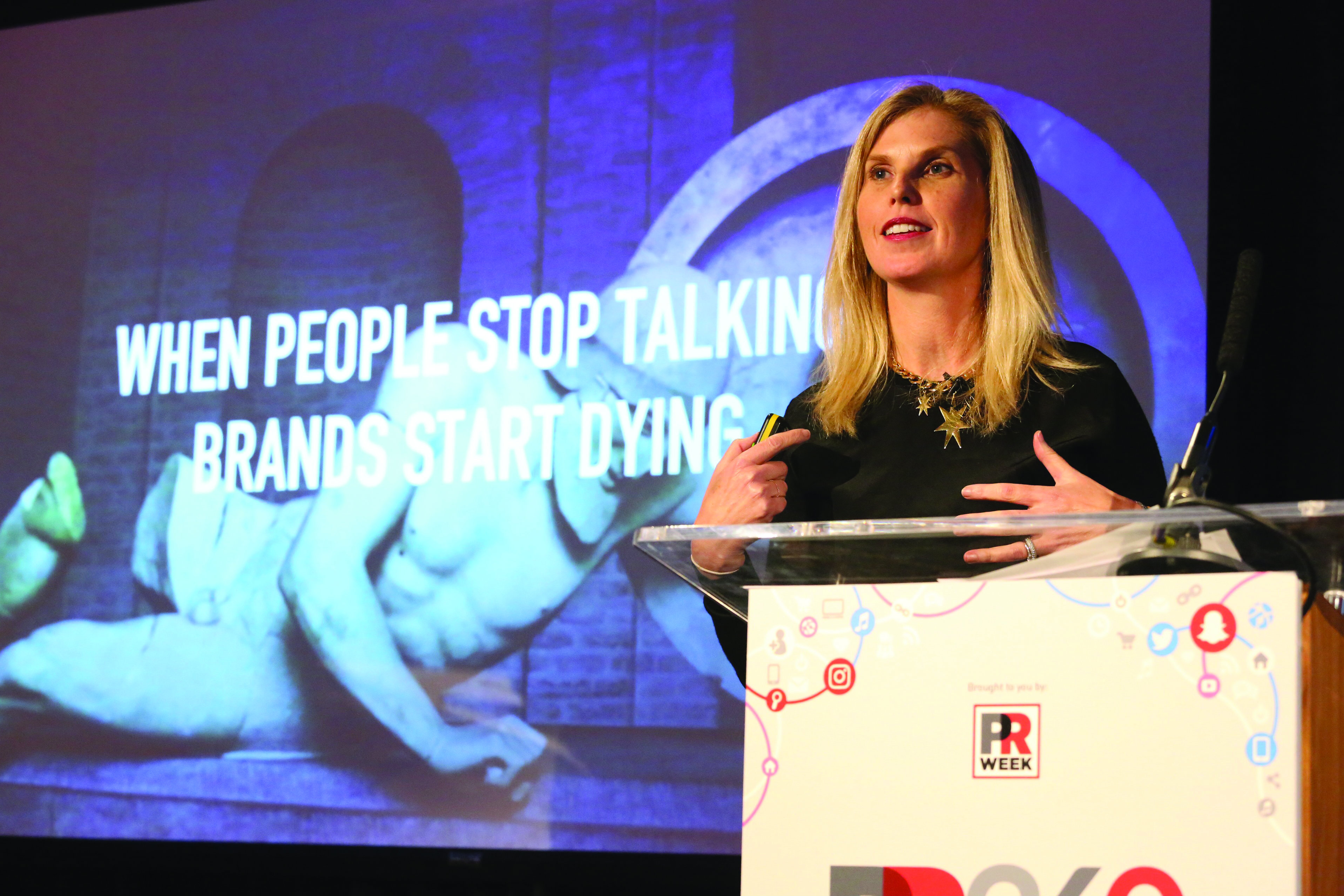