The body that scrutinises public spending produced its annual report last week. Since 2010, this has included the results of an Ipsos Mori survey on perceptions of the NAO among MPs.

It found that 27 per cent of MPs were not "familiar" with the NAO when questioned last year - awareness of the organisation in the commons has never been has high as it was in 2010.

However, the proporition of MPs who reported having a favourable opinion of the NAO (62 per cent) and saying they would "speak highly" of the body (50 per cent) had both risen since the year before. 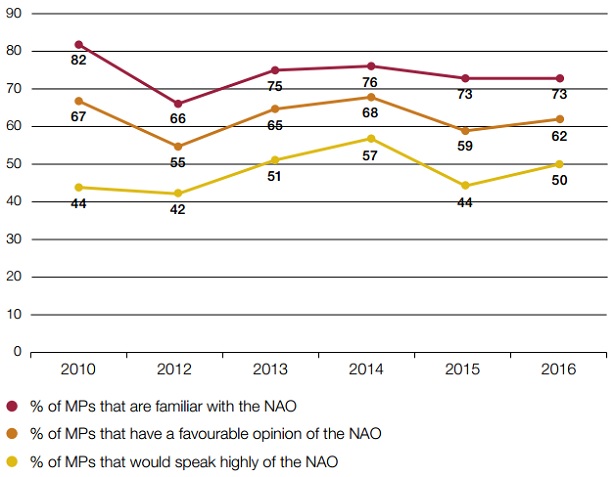 The report says: "Our aim is to become a more clearly acknowledged source of authoritative information and advice within Parliament to help hold government to account more effectively. The focus of our wider engagement has been with select committees, individual MPs, parliamentary staff and the House of Commons Library.

"Through the survey, we have identified communication with MPs as a focus for improvement. Around one in four MPs' offices, including Cabinet and Shadow Cabinet ministers, have signed up to receive embargoed copies of our reports."

Of those MPs who are aware of the NAO, more than eight in 10 said it believed the organisation was "above average" for acting with authority, impartiality, independence, honesty and integrity. This was a "small reduction since 2015" - although the exact figures are not given.

It also notes that the NAO was referenced by five parliamentarians per sitting day in 2016-17, compared with four in 2015-16.