The row concerns the future of Charing Cross Hospital in London, which campaigners claim is facing closure – with plans to demolish the existing buildings and replace them with clinics on a site no more than 13 per cent of the size of the current hospital.

For its part, the NHS argues that the proposals amount to changes in services, rather than the closure of a hospital.

Earlier this month PRWeek revealed how the NHS has made a formal complaint to Hammersmith & Fulham Council for telling residents the hospital is to close, accusing the council of breaching the Code of Recommended Practice on Local Authority Publicity, which states publicity should be lawful, objective and even-handed.

But in a furious response, cllr Stephen Cowan, leader of Hammersmith & Fulham Council, has accused the NHS chiefs of trying to silence criticism of the planned changes to Charing Cross Hospital by attempting to gag the council. 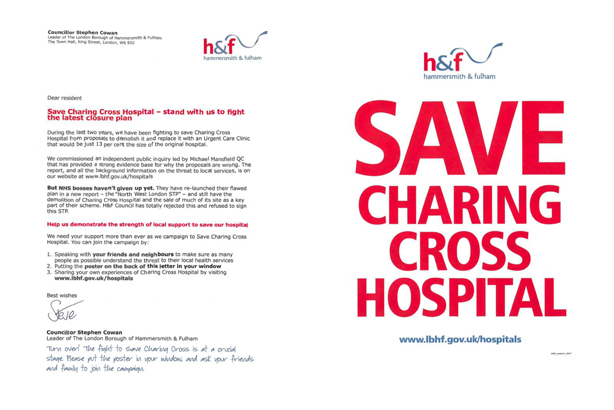 In his letter, seen by PRWeek, responding to the complaint, he states: "I wholly reject your assertion that the council's letter to H&F residents highlighting the continuing threat to services at Charing Cross Hospital has breached the Code of Recommended Practice on Local Authority Publicity."

The letter adds: "Your complaint appears to be a crude attempt to gag the council from letting people know what your actual plans for Charing Cross Hospital are."

It accuses the two NHS bosses of "not in any way presenting the whole truth of what you propose to do" and claims they are, "playing fast and loose with the English language" and showing "contempt for the public who you evidently hope are taken in by such misrepresentation."

The letter adds: "Your approach to communicating with the public is at best thoroughly disingenuous."

Cowan told PRWeek that the NHS plans for the future of the hospital are "like demolishing someone's house only to tell them they have in fact not lost their house – because they’ll be given a new garden shed which will be called their 'local house'."

Christian Cubitt, a former deputy spokesman for David Cameron who is the director of comms at the North West London Collaborative of Clinical Commissioning Groups, has been drawn into the row.

Cowan's letter claims NHS officials published their letter of complaint and briefed the media before sending it to him.

He states: "You published your letter of complaint to me on your website and briefed the media on it before sending it to me."

The letter also demands to know details of meetings attended by Cubitt "and other communications staff in your organisations" as well as "what advice did they give, and what role they played both in drafting it and briefing the media and stakeholders?"

A spokesperson for the local NHS said they had received cllr Cowen’s letter and would respond in due course.

The spokesperson continued: "Charing Cross Hospital is not closing. Claims that it is only serve to cause anxiety amongst patients and staff.

"Our stated focus for the next five years is on providing better ways of helping local people stay healthy and avoid unnecessary hospital admissions or long stays. Only if and when we see this make a real reduction in demand for emergency and inpatient care will we look to make any changes to A&E or acute capacity.

"The Trust invested over £8m in improvements at Charing Cross last year and more investment is planned for this year.

"We want to work with patients, residents and the council to have an open and honest engagement about the long term future of the hospital."