CANNES, FRANCE: The team from Hungary won the Gold Prize in the 2017 Young Lions PR competition at the Cannes Lions International Festival of Creativity on Monday.

The Hungarian team of account executive Paloma Madina (below, on left) and account manager Luca Hadnagy (on right) from HPS Experience won the Gold after presenting their campaign within 24 hours of receiving the assignment, according to ICCO. 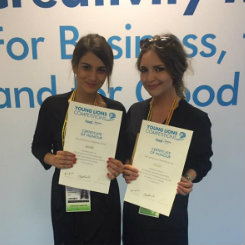 The Hungarian team’s campaign focused on an assignment from the British Red Cross on "silent emergencies."

Twenty-two teams of two vied for the Young Lions crown after winning local competitions in their own countries set up by Cannes Lions representatives.

Last year, Michael DiSalvo and Ben King, then both account directors in Ogilvy’s New York office, won the Gold in the Young Lions.