Just clearing something up...

In case her recent damning criticisms of the Conservative Party's campaign strategy weren't enough, Theresa May's old comms chief has updated her LinkedIn profile to ensure there can be no doubt about who she doesn't work for. 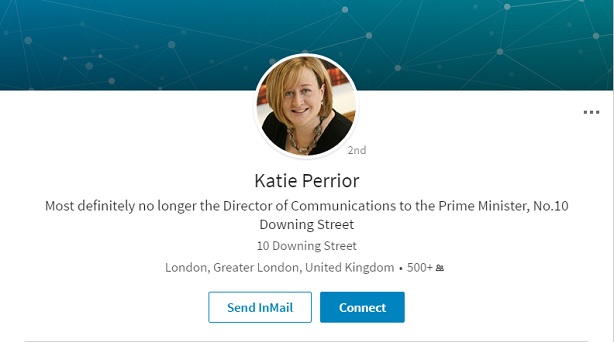 Roll up, roll up: it’s open season on Hill and Timothy

Theresa May’s co-chief of staff Nick Timothy, the ‘Brummie Rasputin’, had been subject of raised eyebrows for his place at the heart of Team May since long before the General Election. Since the polls, it has become de rigueur to criticise how he worked. Fellow co-chief Fiona Hill has also been under scrutiny - but she left more quietly and has kept her head down.

Writing on Politics Home, Weber Shandwick's Joey Jones recalls his short (two-month) stint as May's spokesman - including how he angered Hill by not letting her know that he was meeting Boris Johnson’s aide Will Walden (now at Edelman). Meanwhile, on Scottish title The Herald, Marianne Taylor wrote that her stint as a press officer "without doubt, the worst job I’ve ever had", and that the memories of it still mean she will from time to time "wake up in a cold sweat".

In a Spectator piece this week giving his account of why the Conservative election campaign flopped, Timothy bemoans that criticism of him has hurt his loved ones, and ends on an unexpectedly sentimental note. He writes: "The biggest lesson of the past week for me has been a reminder of the importance of friends, family and love."

That’s one way of defining Power

While Trump, Spicer, Edelman and plenty of other expected names came up with frequency when PRWeek asked Global Power Book entrants who was the most influential PR professional in the world, some people gave more left-field answers.

Ryanair head of comms Robin Kiely harks back to the sweary kingpin in TV’s The Thick Of IT - and suggests following that example occasion. Kiely’s answer: "Malcolm Tucker (below). I recommend selecting one of his finest quotes at random and pasting it into your next angry email to a journo." 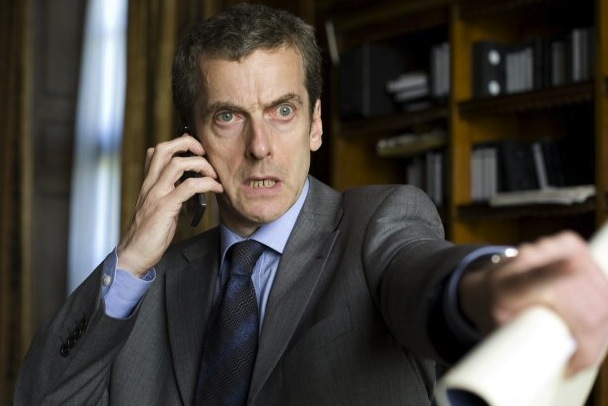 Jon Higgins of Ketchum adopts a more mournful tone, answering: "Sadly, he's no longer with us - Willy Wonka. That Golden Ticket was genius."

To PRWeek’s Crisis Communications conference now, and Francis Thomas, head of corporate affairs at train operator London Midland, had some insightful comments on the topics of trust and internet trolls.

"Trust is like a bank account," he told a panel session at Tuesday’s event. "Our job is to put a little bit in every day so when the bill comes in, you’ve got enough to pay for it."

More strikingly, Thomas had this to say on the subject of handling trolls: "Never wrestle with a pig, because all that happens is you both get covered in muck, and only the pig enjoys it."

He was more provocative when discussing a previous role he had at British Rail. "In those days we used to kill a lot of people," Thomas said, to audible gasps from the audience. He added a pointed reference to Labour leader Jeremy Corbyn’s support for re-nationalising trains: "Thank god we don’t these days; we’re the safest railway in Europe. Mr Corbyn, we can have a chat offline."

Also on the panel, Katherine Allin, communications manager at the British Paralympic Association, recalled a crisis comms incident just before the 2014 Winter Paralympics in Sochi, Russia.

"We had people in the air and by the time they landed Putin had invaded the Crimea. Luckily next year we’re having it in South Korea, so I’m sure there won’t be anything like that." 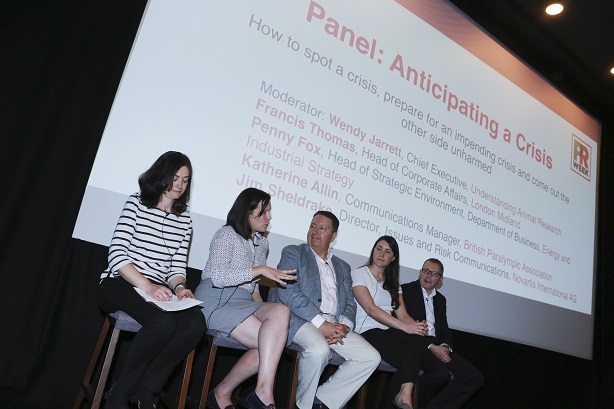 Food for thought at Fleishman

Summer party season is in full swing and FleishmanHillard Fishburn (otherwise known as FHF London, or at other times FleishmanHillard UK) held their bash last night on the stunning balcony of Omnicom Towers under clear skies. 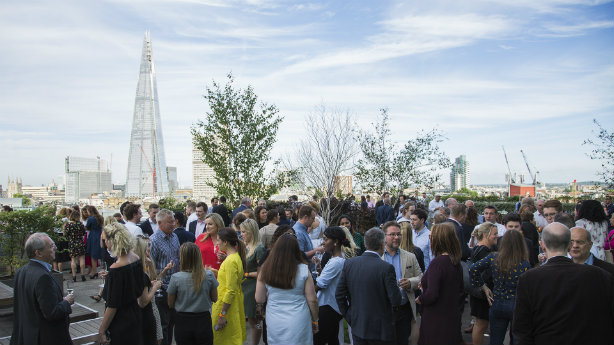 It now being nearly two years since its original component parts (FleishmanHillard and Fishburn) began sharing offices, many of the staff have only known the combined agency. But the memory of Fishburn towers lives on for some - one of its alumni told Flack that a major draw for staff thinking of taking up a job with the then Covent Garden-based Fishburn was its low-price, high-quality canteen.

Heaven knows what this individual would have made this time last year, when one of the refreshments on offer was crickets.

That same edition of Flack, incidentally, included us teasing Jeremy Corbyn for having begun experimenting with Snapchat. How things change...

Flack has something of a sore head this morning, having indlulged himself in another agency summer bash last night, this time organised by the good folks at Brands2Life.

Thankfully, Flack was able to stay well above ground and to the south of the Thames, with the B2L party hosted at the top of The Blue Fin building a mere Spider Man swing away from Omnicom's London HQ.

(FYI, the event was much busier than this image suggests - the crowd had merely moved to give the band space to play...)

Flack hears that PRWeek's Haymarket stable-mate, Third Sector magazine, played a jolly game of ‘guess the minister for civil society’ with press officers at the Department for Culture, Media and Sport this week.

Journalists on the title said they were informed by DCMS that John Glen MP (we know, who?) had been given the brief and duly set about putting the news out to an expectant charity sector.

But, less than two hours later, DCMS was left frantically trying to push the media genie back into the bottle, saying it was awaiting confirmation of the post.

A day later, confirmation did indeed come and it was not Glen, but Tracey Crouch - also minister for sport - who had in fact landed the job. By this time, of course, many in the charity sector had already issued public statements offering the open hand of welcome and friendship to Glen.

Third Sector's editor was unimpressed, but Crouch took it in her stride.

Awww and there was me thinking your word of day should be 'congratulations' ?? Look forward to meeting you soon

No matter. Perhaps it’s best the charity sector doesn’t use up precious resources forging a relationship with the real new minister. Flack hears that all the jobs are up for grabs again by the autumn anyway…

Amateur private investigator Flack was intrigued this week to see PRWeek reveal that the Met Police had received an "unprecedented response" to its campaign to recruit detectives, with 2,700 applications received in the first two weeks.

Could one of those potential new super-sleuths be founder and creative director of The Romans, Joe Sinclair? That lustrous beard would form the basis of a convincing disguise... 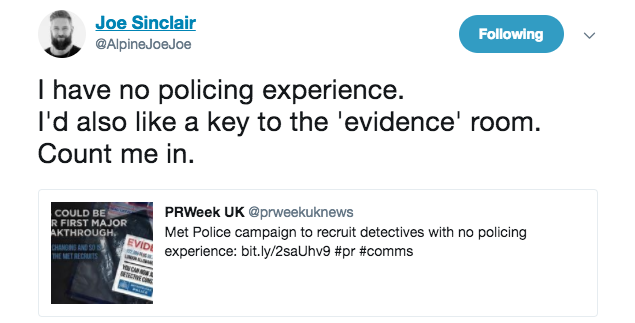