Those surveyed are confident about the ability of their organisation to build a compelling brand narrative and there is pressure among respondents for senior management to increase their budgets to extend their work into new campaign activities or cover more areas of their business.

But there are challenges for the sector, too, with concerns about building corporate reputations and adapting to the changing political environment. A significant minority point to a lack of understanding in their organisation about the role of comms.

Brexit looms large on the horizon, and a majority point to planning for regulatory change as a key comms priority in 2017 and beyond, while others indicated the need to prepare for leaving the EU by building a more global profile for their business.

There were 113 respondents to the survey and answers were segmented in terms of: turnover of the respondent's company (from £50m-£100m through to £4bn-£5bn); sector, including professional services, sales & media, and retail; and whether their company was global or UK-based.

Here are some of the main findings in detail: 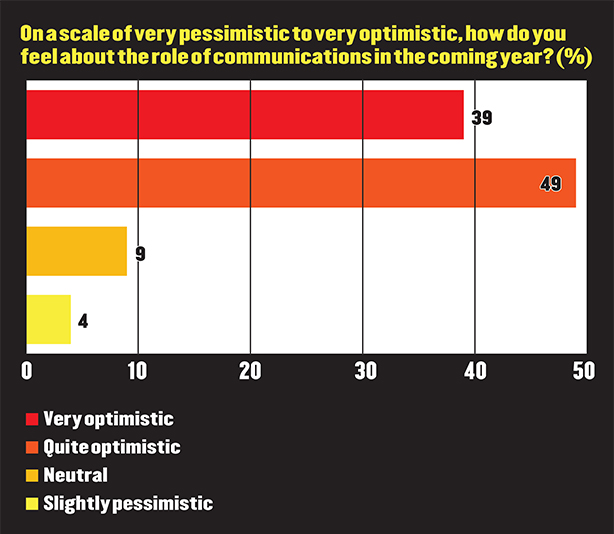 Optimism about the coming year was particularly high among comms directors for larger companies (annual turnover above £3bn), with 50 per cent saying they were very optimistic.

The highest proportion of those saying they were pessimistic about the coming year worked in the sales and media sector, where 10 per cent gave this answer.

Commenting on these findings, Harriet Rich, managing director, corporate & business communications at Brands2Life, said: "This is the most upbeat report in five years. Optimism is high amongst UK and global comms directors. They are clearly seeing the opportunity, across all sectors, to shape corporative narratives and lead creative, ambitious campaigns." 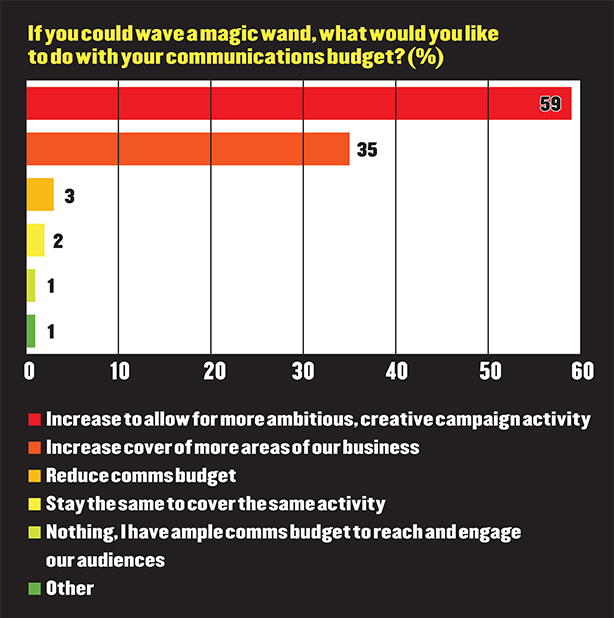 Those surveyed were asked what they would like to see happen to their comms budget, with options of increasing it to allow more ambitious campaign activity, increasing it to cover more areas of the business, reducing it, or remaining the same.

Perhaps unsurprisingly, 59 per cent said they would like to see it increased for more campaign activity, while a further 34 per cent called for their budget to cover more areas of the business. Just five per cent opted to reduce their budget or keep it at the same levels. 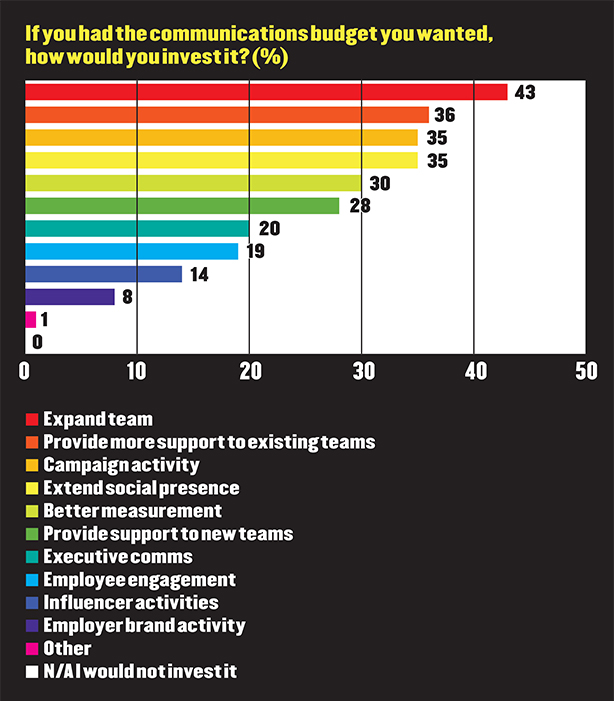 A further 14 per cent said they would invest extra budget in ‘influencer activities’.

Those working in the largest firms were more likely to say they wanted to expand their teams, while those working for companies at the lower end of the turnover scale said they wanted to support existing products and teams with an increased budget.

Rich said: "This desire for additional budget to expand teams and invest in creative campaigning is so strong. As an industry, we need to turn this desire into entrepreneurialism and make the case for investment by demonstrating the tangible commercial impact of our work. Forensic market research is needed to shape communications strategies and inform bolder campaigning." 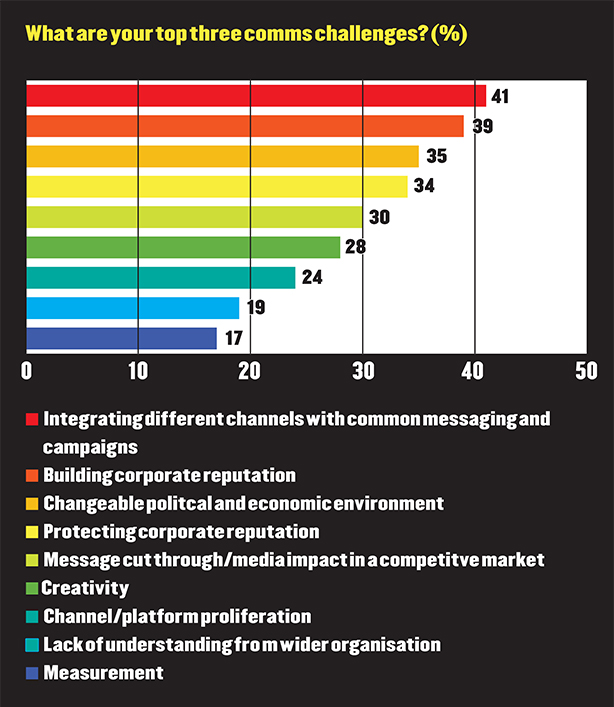 Comms directors were then asked to name their top three challenges. The top choice was ‘integrating channels with common messages and campaigns’ - 41 per cent of respondents went for that answer.

However ‘building corporate reputation’ was close behind, at 39 per cent, while 35 per cent named the ‘changing political and economic environment’ as their top challenge.

A smaller number of overall respondents, 24 per cent, said ‘channel/platform proliferation’ was their main concern. In a sign that comms functions are still not fully appreciated at board level, 19 per cent said their challenge was ‘lack of understanding from the wider organisation’.

But when answers were segmented along turnover lines, the number of people who pointed to a lack of understanding in their organisation about comms rose with the size of the company, with 25 per cent those in companies with a £2bn turnover giving this answer. 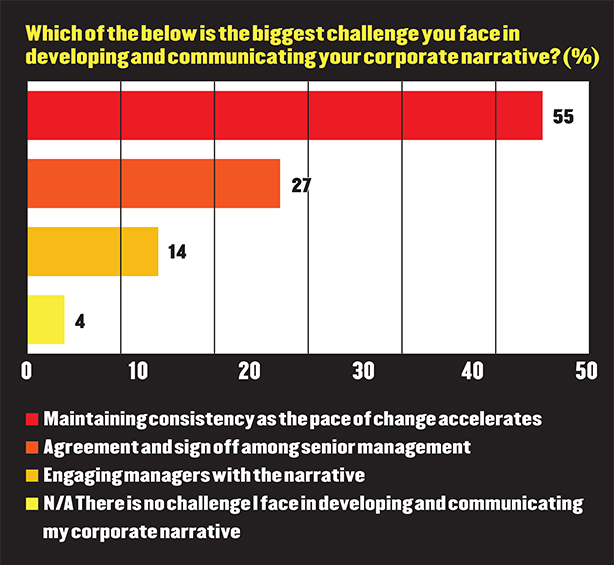 The survey asked comms directors to agree or disagree with a range of statements about their organisation’s ability to build brand narrative.

Asked to comment on the statement ‘We have a strong brand narrative that we reinforce on a regular basis through our communications and marketing activity’, 88 per cent either agreed or strongly agreed with it.

But there was still more work to do in this area, respondents said, with 68 per cent agreeing or strongly agreeing that ‘we have a lot of work to do to create a compelling brand narrative’.

Asked what the greatest challenge was in building and communicating a brand narrative, 55 per cent named ‘maintaining consistency as the pace of change accelerates’.

There was also an insight into the frustrations of comms chiefs, with 26 per cent naming ‘agreement and sign-off with senior management’ as their biggest challenge in building a narrative. A further 14 per cent said ‘engaging managers with the narrative’ was their greatest challenge in this area.

Rich said: "As the report shows, the most critical starting point for communications is shaping compelling brand narratives and stories that really deliver across a number of different channels with digital at the centre." 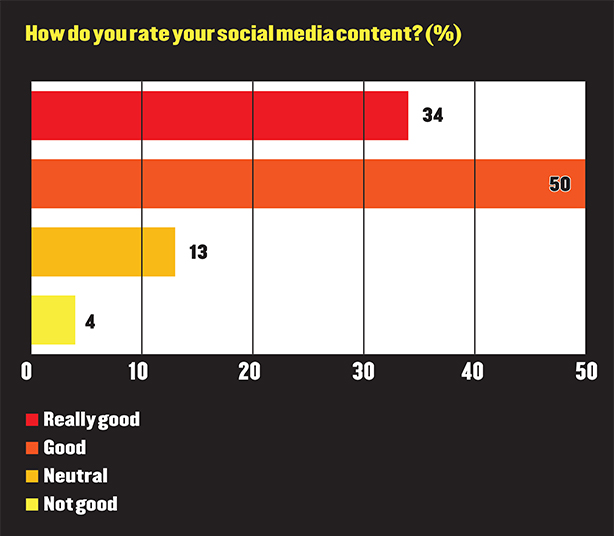 Those surveyed were asked to agree or disagree with a range of statements about social media and the digital content they manage.

More than 80 per cent agreed or strongly agreed with the statement ‘We have defined our audiences and tailor all digital marketing and communications to their personas and needs’.

However, there was less support for the statement ‘we have a clear strategy for social media’, with 72 per cent agreeing or strongly agreeing. Only 50 per cent of those working in finance agreed or strongly agreed with it.

Nearly 55 per cent of all respondents attributed their positive rating of their company’s social media content to ‘new business growth’, while 54 per cent said it was their ‘growing follower base’ that led them to give a positive rating.

Rich commented: "55 per cent of communicators have experienced new business growth from their social media content, yet only 25 per cent feel that their organisation’s social presence reflects the brand. This feels like a big opportunity to fully demonstrate the power of communications to deliver better stories and better content to engage audiences and drive growth." 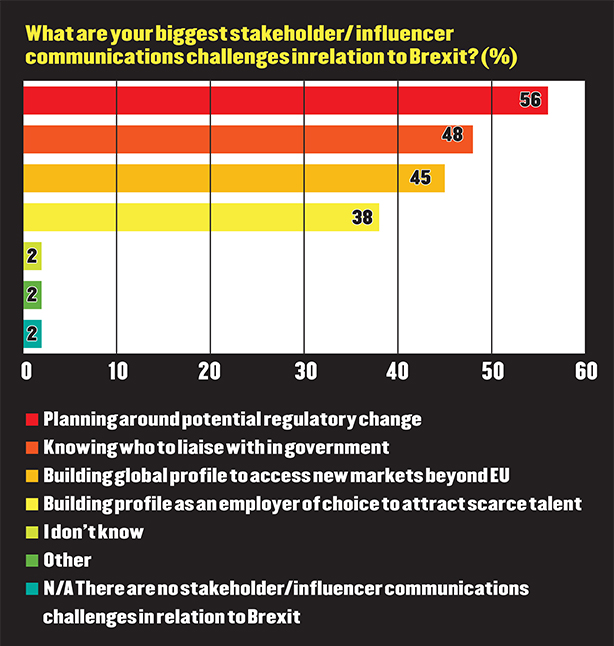 Brexit negotiations, led by a minority government propped up by a minor party, have made the future more uncertain than ever. Those surveyed were asked to list their top comms challenges in relation to Brexit, with 56 per cent pointing to ‘planning for regulatory change’, while 48 per cent said ‘knowing who to liaise with in government’ was their biggest challenge.

In a sign of the need to look beyond the EU for trade in future years, 45 per cent said their challenge was to build a global profile to access new markets. Those working in companies that already have a global reach were more concerned with their profile on the world stage than those based only in the UK.