That’s according to analysis of PRWeek’s Global Power Book, which will be released later this week.

Of those global comms figures who answered the question, "is the uncertain geopolitical climate good or bad for the PR industry?", 130 said it was good and just 25 said it was bad.

Jon Harris, SVP and chief comms officer at ConAgra Foods, sums up the views of many: "With great uncertainty comes great opportunity."

Charles Lankester, EVP at Ruder Finn Asia's global reputation & risk management practice, goes further. He wrote: "It's not good or bad - it's fantastic. Turbulence = change and change is (usually) healthy. Change keeps us all on our toes."

In contrast, AIA Group’s Stephen Thomas says: "Uncertainty slows or halts business decisions and that is not good for any industry, PR included."

Havas PR US chief executive Marian Salzman takes a philosophical view: "Uncertainty is bad for the soul and we are a soulful business, so I would say all this tension and negativity isn't good for PRs, humans, the planet, and on and on."

MSLGroup chief influence strategist Erin Lanuti is downbeat for a different reason: "The current geopolitical climate is giving everyone news fatigue, which is further exasperated by the continued bantering about media bias and ‘fake news’. I believe all of this is bad for the PR industry, as media bias, whether real or implied, diminishes the trust people have in news as a whole."

However, a sizeable number of Global Power Book members – 45 – believe the current climate is both good and bad for PR. 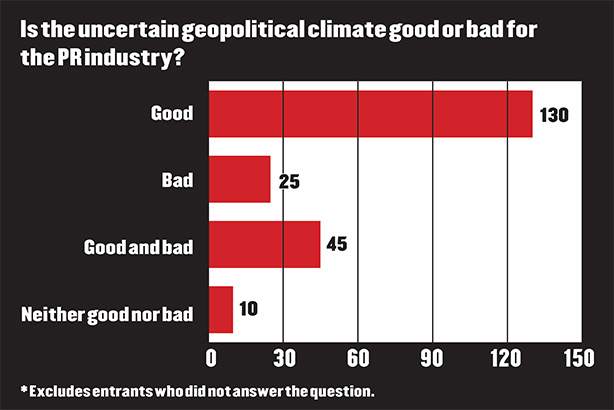 "It's good in that companies and organisations turn to PR counselors to help navigate change and complexity," argues Weber Shandwick CEO Andy Polansky. "It's bad in the sense that uncertainty can sometimes lead to caution around decision-making."

Meanwhile, 10 respondents agree with this stance from Text 100 Asia Pacific chair Anne Costello: "It’s neither good nor bad for any industry. It’s just the reality of the world in 2015."

Read next: 'Challenging', 'fun', 'Orwellian' - the world's top PR pros look back on the last 12 months