In the month that the US weighed into Syria, Theresa May called a snap election and Brexit rumbled on, few noticed what was going on in the world of business. Only a few stories punched through into public consciousness. These included the £129m fine of Tesco’s for improper accounting, the supermarket’s attempt to take over the wholesaler Booker and United Airlines’ woeful mishandling of a passenger on its overbooked flight. 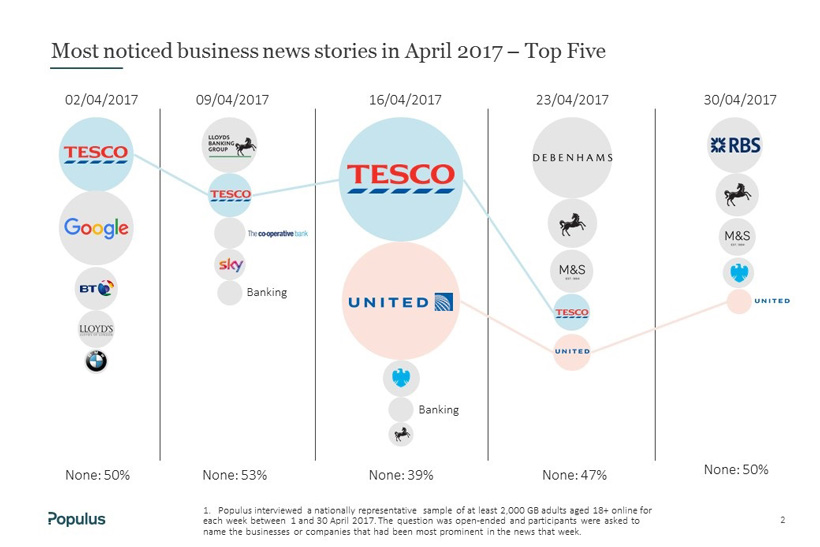 Tesco under the spotlight

Since Tesco overstated its profits in an accounting scandal in 2014, the business has come under intense public scrutiny. As one of the UK’s biggest employers, a mainstay of the high street, and a shopping destination of millions, what happens to Tesco is relevant to – and therefore picked up by – many.

This month Tesco agreed to pay a £129m fine imposed by the Serious Fraud Office and to compensate investors £85m following an investigation by the Financial Conduct Authority. Dave Lewis, the CEO of Tesco, attempted to draw a line under the affair by saying, "We’re recognising the situation, we’re paying the fine, we’re paying the compensation, and that allows the Plc to move on."

Lewis, appointed CEO in the wake of the scandal, has brought Tesco from the brink of crisis by selling off non-core aspects of the business and improving its relationship with suppliers. But in the face of continuing litigation from other investors, he needs to understand that Tesco doesn’t get to decide when it’s time to move on. It’s only the aggrieved parties that can do that. In the meantime, he needs to keep apologising for the failings of his predecessors no matter how difficult or tedious he might find it. In reputation management, when you’re sick and tired of apologising for past failings, you must keep going, because it’s probably only then that your message is beginning to get through to consumers.

When you’re sick and tired of apologising for past failings, you must keep going – it’s probably only then your message is getting through to consumers

Lewis was also forced to defend his plan to acquire the wholesaler Booker this month after shareholders Schroders and Artisan Partners criticised the takeover as overpriced. Others are concerned that this deal is coming at the wrong time, arguing that the upheaval of rationalising two distinct businesses would distract from the turnaround of Tesco. In addition, they say that Tesco’s acquisition of Booker, which also owns Budgens and Londis, would invite the scrutiny of the Competition and Markets Authority (CMA).

This is indeed a high stakes game for Lewis, who has put his reputation on the line for this controversial deal. Failure would leave him in a precarious position, but success could secure the future of an organisation in an increasingly squeezed sector.

In recent years, Aldi and Lidl have snatched the bottom-end of the market, and Waitrose and M&S have cornered the top-end, leaving Morrisons, Asda, Sainsbury’s and Tesco to fight for the centre ground – while AmazonFresh threatens to disrupt the entire market.

Sainsbury’s already has its eye on the horizon with its takeover of Argos, which has helped it deliver strong fourth quarter sales growth. Incorporating Argos’ higher margin non-food offer into Sainsbury’s stores and rationalising the distribution network was only the beginning; this month Argos announced it was creating its own-brand product ranges with design help from Sainsbury’s. This shows the scale of ambition of the merger and also the possibilities available.

Tesco’s gamble matches Sainsbury’s in ambition. It could help the business to further its lead in the convenience sector (provided the CMA does not force it to sell-off chunks of its small format stores) and open up a new market for Tesco – the food service sector. But Lewis needs to show he has not bitten off more than he can chew by demonstrating what this merger means for Tesco. Including what impact the deal will have on stores and – crucially – how it will benefit the customer. So far, speculation about this deal has been dominated by concerns about risk, but more clarity from Tesco about the direction of the combined businesses would certainly help many understand why this risk is worth taking.

How not to do it

The United Airlines video typifies a 21st century PR disaster. The raw video of a blood stained older man being dragged off the plane acted as a powder keg, ignited by the ill-advised and unfeeling response of the CEO, Oscar Munoz. The CEO’s office, the legal department and the entire communications team should have seen the tidal wave of negative press coverage and reputational damage coming.

This could have all been different had Munoz and his support teams stepped back, put a wet finger in the wind and felt which way the breeze was blowing. Instead, he found himself testifying in front of Congress on the relationship between airlines and their passengers.

Munoz should have taken a breath and broadcast a heartfelt apology to David Dao – the doctor who was injured and dragged off the flight to make way for transiting cabin crew – to his patients who were affected, to others on the flight, to all United Airline customers and to anybody who viewed the horrifying video. He should have explained that this was an isolated case of bad practice. He should have then detailed the steps that had been put in place to make sure this will never happen again. He should have immediately committed the resources of the company to compensate Dr Dao for his humiliating ordeal.

This story underlines the impact of misjudging the mood of the public. It will be years before the passage of time dims the association of United Airlines with this video and the response of its CEO.

While every crisis is different, senior business journalists suggest that the key elements of good crisis management are:

The above advice might seem both simple and obvious. However, when a crisis hits it is surprising how many organisations fail to follow it.