Carter Wilkerson has done it. He’s getting a year’s worth of free chicken nuggets from Wendy’s, and he didn’t even have to get 18 million retweets to earn them.

Wilkerson’s tweet from early April asking for a year’s supply of free chicken nuggets from Wendy’s did, however, garner 3.42 million retweets, pushing him past Ellen DeGeneres’ Oscar selfie tweet, which was the previous record-holder.

Wilkerson’s effort was enough to impress Wendy’s, which is donating $100,000 in his name to the Dave Thomas Foundation for Adoption, which finds homes for children in foster care. Wilkerson is raising money for the cause on his website, NuggsForCarter.com.

The Nevada teen tweeted about his record-breaking performance on Tuesday:

We did it guys! Thanks to you're help and support we were able to raise $100k for @DTFA and beat @TheEllenShow record! Now let's get 18mil!

.@carterjwm is now the most retweeted tweet of all-time. That’s good for the nuggets, and $100k to @DTFA. Consider it done. #nuggsforcarter pic.twitter.com/k6uhsJiP4E 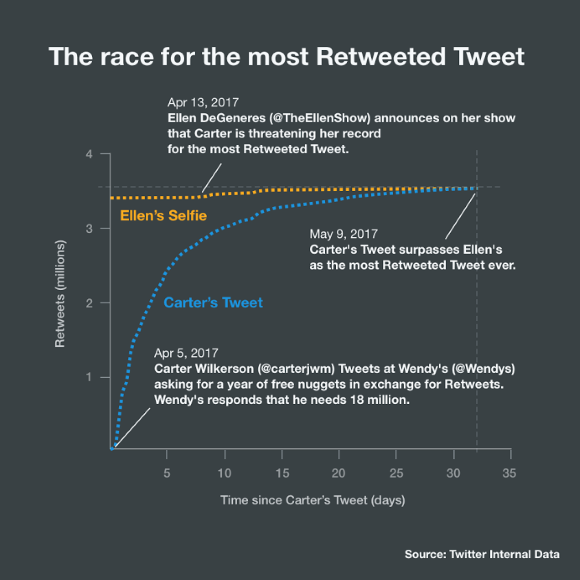 "Wendy’s has a long history of leveraging Twitter to communicate with people," the San Francisco-based company said in a blog post. "From the first-ever interactive March Madness bracket run entirely through Twitter’s direct messages, to a livestreamed, behind-the-scenes look at how to make the Baconator featuring influencer Cody Johns, Wendy’s is consistently using their unique brand voice to connect with a wide audience."

The blog post included a comment from Wendy’s chief concept and marketing officer, Kurt Kane, who said the chain could not be more excited for Wilkerson.

"We love Twitter because it lets us talk with people in real and fun ways, and they have been loving us back as a result," Kane said.