Over a fifth (21 per cent) of consumers have boycotted a brand following a scandal/negative press, a new study from YouGov reveals.

The Inside the Mindset of a Brand Boycotter report explores the nature of consumers that stop using a brand, and underlines how vital it is to placate their anger following adverse headlines. It shows that of those who stopped using a brand, three quarters (67 per cent) still don’t. 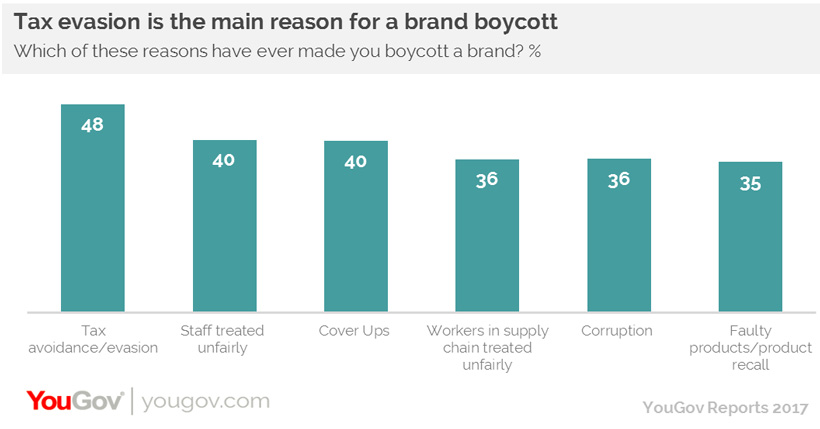 YouGov’s report suggests that although some boycotting consumers do come back eventually, rarely do they use the brand as much as they did before. While one in four (26 per cent) went back to the brand they used it less often. Only 1 per cent used it as much as previously.

However, there are also occasions when a brand does not necessarily need to change its practices or alter its approach. Nearly three in ten (29 per cent) returning boycotters started using the brand again because it had become too inconvenient not to, and over one in six (18 per cent) felt it was necessary to use the company in their work or family life.

There have been a number of cases of brands getting in hot water with consumers over the past couple of years over issues such as tax avoidance or not treating staff well enough. While it is not as straightforward as saying that every time a brand is seen to misbehave it will lose customers, there is a distinct proportion of consumers who will vote with their wallets.

But there is a difference between how people treat the type of brands that they feel give them something special and those who are seen as one of many. A large majority say they will stick to brands that they like and so the relationship a company has with its customers is key for surviving any bumps in the road.

Download the Inside the Mindset of a Brand Boycotter report here

"Boycott" by Martin Abegglen is licensed under CC BY-SA 2.0