The survey, conducted between 6 and 21 April, was designed to lift the lid on the successes and failures of the pitch process, and uncover whether or not changes need to be made.

Of the 71 per cent who are dissatisfied, 30 per cent say this is because briefs are "too broad", while 41 per cent say briefs that do not include a stated budget are inadequate.

James Hickman, director at Hatch Communications, says the brief "seemed to be" the biggest issue with the pitch process.

Hickman says: "Rarely do we receive a briefing document that has clarity on what is required, objectives and success metrics. Clients need to be more focused on what success looks like rather than expecting agencies to provide creative platforms based around a very woolly brief."

Meanwhile, just 50 per cent of clients say they are typically satisfied with the quality of pitches (the remainder gave no opinion); suggesting agencies need to up their game too.

Ian Crowder, who heads comms at the AA, says proposals do not always reflect the potential shown in creds and chemistry sessions. He says this "underlines the importance for agencies to fully understand the brief, ask questions and not make assumptions about the business or its place in its market".

Speaking to PRWeek ahead of the survey launch last month, Alex Grier, managing director of Frank PR, says the pitch process had "changed a lot" in the past few years. "It grew up, became formalised and some of the fun got lost in all the process. And there can be a lot of process," Grier said.

He said once invited to pitch, some of the briefs could be so prescriptive "that it was hard to see where any creativity could be injected".

Agencies and freelancers also accuse clients of stealing their ideas, despite failing to win the business. Almost 70 per cent of respondents make this claim in the survey.

PRCA director-general Francis Ingham says the practice is "completely unacceptable". "The PRCA created the Ideas Bank to give agencies the opportunity to keep a permanent record of their pitches to stop this from happening. It's idea theft pure and simple, and it needs to stop."

Elsewhere in the survey, agency-side and freelance PRs reveal they are dissatisfied with the time given by clients to prepare for a pitch.

One agency PR says: "Preparing a proposal that is as realistic and thought-through as it is ambitious takes more than one or two weeks of whoever happens to have time."

Another says that in order to produce a good pitch, agencies need to fully understand the objectives, which are "rarely given in a brief", and need time to conduct research - while managing existing workloads. 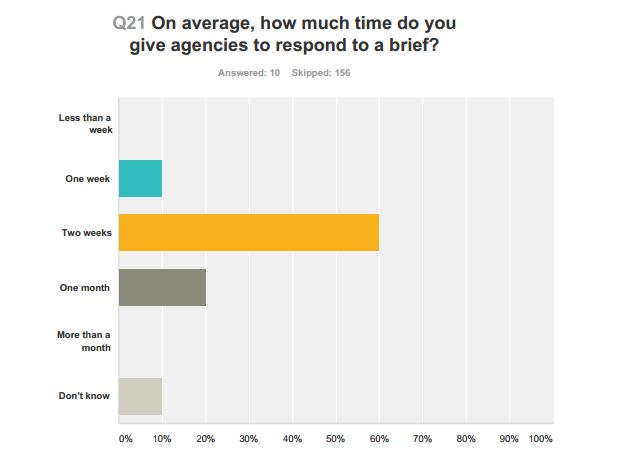 Meanwhile, half of in-house PRs say they are satisfied with the pitching process, while the remainder chose not to give a firm opinion.

Worryingly, only 22 per cent of in-house respondents think agencies deliver on expectations set in pitches. Two-thirds admit they "sometimes did", while 10 per cent say they did not. 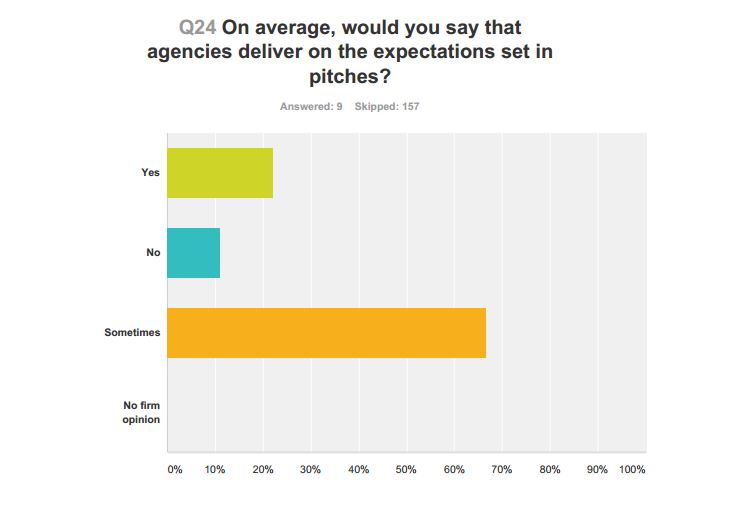 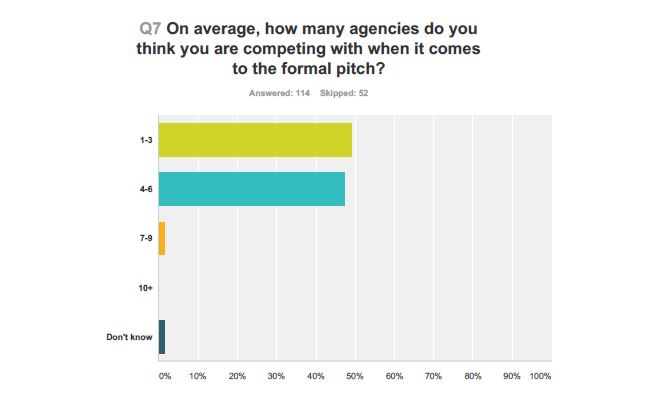 One agency-side respondent, who asked to remain anonymous, says they were recently invited to a 14-way pitch. They say: "There is no joy to be had there. Granted, this is unusual but I don't think any agency should pitch against more than two other agencies. It is just laziness from the prospect."

Another anonymous respondent says their main frustration was the number of other agencies they typically compete against. "It's usually too many and that amounts to a lot of wasted time and effort for everyone," they say.

By contrast, 90 per cent of the 26 in-house professionals who responded to the survey say their company typically invites between one and three agencies to a formal pitch. The remaining 10 per cent say it is typical to invite between four and six agencies.

The cost of pitching was also questioned during the survey. Richard Fogg, CEO of specialist b2b technology agency CCgroup, says pitching is a "very expensive" way to win business.

He says: "Even small pitches consume £5,000-£10,000 of billable time, which means you're looking at a long time before making a meaningful margin. But while everyone else does it, you have to. And someone always will."

Ingham admits the pitching process is a source of ongoing frustration for clients and agencies. He says: "It is high time that both sides consider reviewing it to ensure the industry is using its time effectively to create well-thought out and creative campaigns."

To improve the process, Andy Sawford, managing partner of political comms agency Connect, suggests pitches focus on a real campaign or a scenario, "rather than covering the same ground as a written proposal".

Despite much of the doom and gloom, however, Aduro Communications founder Natalie Luke says pitching is the lifeblood of any agency and one of the main reasons PRs prefer agency life to in-house.

"The rollercoaster thrill of the pitch is an absolute highlight," Luke says.