No borders for Bell

Flack nearly choked on their Perrier Jouet when spotting liberal lefties Cherie Blair and Adam Boulton happily mingling among the grandees of the Tory right. The disarmingly tall Jacob Rees-Mogg was there alongside flamboyant Daily Mail political journalist Andrew Pierce.

Bell confided to a still-reeling Flack: "I’ve always rather liked Cherie after meeting her during an interesting law case a few years ago."

He then made a typically off-the-cuff speech prompting a question from Pierce about how Theresa May compared with Maggie, to which Thatcher’s former press chief simply replied: "Well, she’s doing very well and gave a brilliant speech today."

Also saying a few words, Michael Moszynski, boss of London Advertising (pictured below, left, next to Bell), said his agency would work closely with Sans Frontieres, but laughed at the irony that fierce Brexiteer Bell had chosen a French name for his consultancy - and one that meant ‘no borders’.

Bell, however, has always been a man of bizarre contradictions; one of the reasons that Flack is so fond of him. 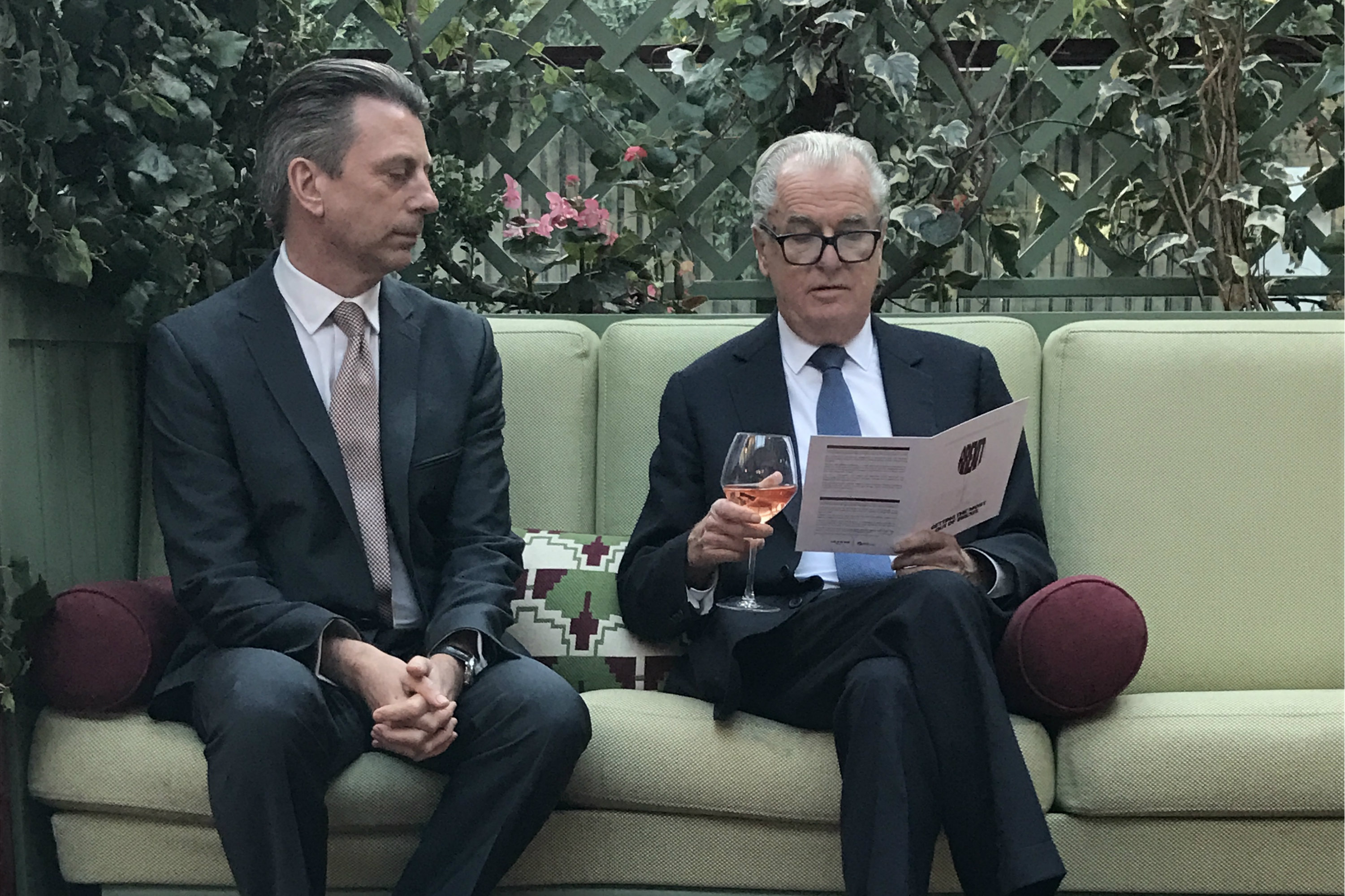 Another PR legend, now. This week Matthew Freud made a rare appearance on stage at Ad Week Europe for a live interview with PRWeek UK editor-in-chief Danny Rogers. The session, called ‘Harnessing fame for the greater good’, focused on celebrities, purpose-driven campaigns and the age of authenticity.

Freud also touched on the issue of gender equality and, talking about his own PR agency, revealed that of Freuds’ 250 staff, roughly 200 are female.

"We may have to start proactively discriminating against women to get more boys through the door," said Freud, tongue firmly in cheek.

However, he was actually building on a more serious point about actor Emma Watson, following her recent appearance in pop culture magazine Vanity Fair. Watson faced a backlash in the media for appearing nearly ‘topless’ alongside a promo for her new film, Beauty and the Beast.

An audience member asked Freud whether Watson – who is also a UN ambassador and women’s rights activist – acted appropriately.

Flack could not agree more. Bravo.

My interview with Matthew Freud yesterday evening at AdWeekEurope https://t.co/RPt9j8Hs5D

Commiserations to Power Book entrant and occasional Flack target Alex Deane. The head of public affairs at FTI Consulting was until recently a City of London councillor. We say until recently, because of this...

Close, but no cigar? Not really close, but we're sure Cuban enthusiast Deane will be treating himself to one anyhow.

The price is rarely right

Flack attended the inaugural BME pros panel event, organised by Elizabeth Bananuka, recently, where the discussion centred on how PR and comms pros from ethnically diverse backgrounds can make a career for themselves in the industry.

There were jokes from some of the panelists about their previous careers as failed journalists. Daljit Bhurji, co-founder of Diffusion PR, recounted how he turned down The Times, as a younger man, when they offered him £12,000 a year as the starting salary.

How could anyone live on that in London, Bhurji asked the room to guffaws of laughter? Answer, from the man at The Times, that many young journalists live "with mummy and daddy". Ouch!

The serious point Bhurji was making was that the predominantly white, middle-class media is unlikely to become more diverse any time soon with this approach to wages. However, he perhaps failed to account for the fact that the number of potential candidates to fill the dwindling number of journalism jobs is what allows media outlets to keep wages artificially low.

Anyway, Flack, of course, can go one better, having been offered (and accepted) £3,000 per year less than this ‘princely sum’ for their first job on a local newspaper and, being a grown-up by then, certainly did not live with mummy and daddy.

How did one survive? Flack recalls a year spent on a mattress on a kitchen table in the unused dining area of a friend’s flat, with only a few scant possessions and an ailing television set, before their salary was increased to £12,000. (Then Flack got a room).

Rise of the PR robots?

"Just received a press release from a (human) PR, punting a company that sells automated PR," wrote Desire Athow, editor of tech buying publication Techradar. "Reminds me of another agency that does PR for an ad-blocking company."

Amanda Coleman, comms chief at Greater Manchester Police, has this sobering comment on news that NHS Blood and Transplant is to cut its spending on campaigns to around £2m per year:

Social whirl (but not for Widdecombe)

Nice idea here: Flack has learnt that a Facebook group set up to help freelance national journalists connect with celebrities and publicists has attracted more than 800 members since launching earlier this year by celebrity freelance journalists Donna Ferguson and Sarah Ewing.

According to Ferguson, a handful of TV presenters and actors have joined to offer themselves up as interviewees, but an email invitation to join was politely rebuffed by Ann Widdecombe’s secretary: "Ann Widdecombe does not do any social media," the journalist was told, "but if this changes at any stage I am sure she'll bear your email in mind."

Flack had a jolly time at a pub quiz on Wednesday with members of Stir PR in Streatham. The team did reasonably well, finishing mid-placed against south London's finest egg heads and trivia addicts. Special mention goes to Stir client services director Jo Seymour-Taylor, who guessed the number of number one singles in the UK since the year 2000 to within a handful. Top work.

Finally, a tip of the captain's hat to Royal Jordanian Airline, whose light-hearted response to the in-flight electronics ban is a sterling example of how to use social media for top-notch PR: