PG Tips has spent most of March "getting the nation laughing again" by adding jokes to special packs of its tea. This fun-filled campaign also challenged members of the British public to crack one million jokes before Red Nose Day. Cheeky spokesman Monkey announced on Twitter earlier in the week that this "epic" challenge had been completed.

WE DID IT! After an epic few weeks of sharing jokes, LOLs and funny GIFs, we've made it to #1MillionLaughs. @RedNoseDay here we come! pic.twitter.com/R4VQtTksX1

Good Morning Britain mega-mouth Piers Morgan has "begrudgingly" agreed to stop tweeting, writing, broadcasting and talking for 24 hours. And to up the ante, Morgan – a lifelong Arsenal fan – agreed to wear a Spurs shirt if the public can raise £50,000. His JustGiving total currently stands at just over £20,000. Apprentice boss Lord Sugar jumped at the chance to silence Morgan, donating £5,000 to the total.

The best birthday present I could have asked for on my 70th, @piersmorgan gagged and wearing a Spurs shirt! @comicrelief @GMB pic.twitter.com/s4fet7cFJc

FitBit – Step Up, Get Down

Fitness tracker FitBit, a supporting partner of Comic Relief, has called in Louie Spence to get the nation dancing for Red Nose Day. Starting in February, for every video uploaded on social media with the hashtag #stepupgetdown, FitBit has been donating £10, until it reaches £150,000.

THANK YOU for your #stepupgetdown dance videos for #rednoseday! You danced- we donated!
Enjoy watching Comic Relief tonight on the BBC! pic.twitter.com/IkrE2V3HOw

Scarlett Moffatt and Mini Babybel – Raise more than a smile

Gogglebox favourite Scarlett Moffatt and Mini Babybel teamed up with Comic Relief at Kings Cross earlier this month to fill the station with #minilaughs and raise more than a smile for the charity. The campaign, which included a giant billboard covered in 10,000 Mini Babybel cheeses, got over 50 pieces of coverage and reached almost 12 million people on social media, according to Popcorn PR, which executed the stunt.

Optician Specsavers, which also partners with the charity, has created a special pair of red glasses with "extra comedy hands" that are designed to sit above the iconic Red Nose Day nose. Pairs of the glasses cost £2, with all proceeds going to Comic Relief. Specsavers is also sharing pictures of people wearing the glasses via the hashtag #giveusawave.

Share your #RedNoseDay specs selfie and #giveusawave visit https://t.co/051qZ5JKZY to donate. Tag your friends to keep the wave going! pic.twitter.com/OnVnLfaeb3

British Airways has once again been running its fundraising initiative, Flying Start, which Comic Relief says has raised over £14m so far. As part of the campaign, British Airways collects spare foreign change that passengers do not need. The airline also called in a handful of celebrity faces, including David Walliams and Emma Bunton, to deliver some questionable customer service at Heathrow airport.

Maltesers has been challenging members of the public and MPs to raise £1m by baking a cake using its sweets and uploading the end result to social media. For each #bakeamillion upload between the 1 February and today, Maltesers has said it will donate £5 towards the £1m target.

Two of PR firm Berkeley’s finest, Jenny Choules and Sian Dennis, will be manning the phones for Comic Relief this evening. The pair will be answering calls and taking donations at client ESP Group’s call centre in Scotland. 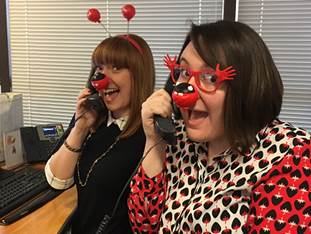