It was announced earlier today (17 March) that the former Chancellor would be the next editor of the London Evening Standard newspaper, while remaining an MP. The news came as a surprise to most, leaving PR professionals with plenty to get off their chests.

It's fair to say the CIPR president isn't a fan of the move:

How MANY jobs does George Osborne want? Ridiculous. Get on with your day job as an MP, or quit. Now's not the time to line your pockets. https://t.co/sAvdEWlaRr

Burson-Marsteller's Andrew Clark pointed out that two jobs might be one too many:

There is just no possible way you can be an MP and edit a major newspaper - and do both jobs properly https://t.co/4qcfYiW5iz

...as did 'Chief Monkey' Angie Moxham: 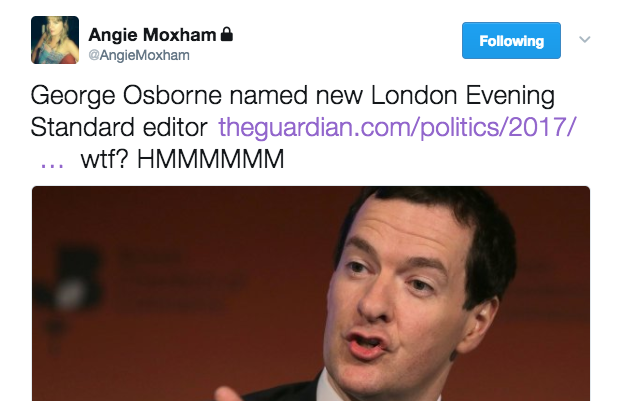 The Lib Dems highlighted a potential conflict of interest:

This doesn't bode well for our coverage in the Standard pic.twitter.com/1mgtm1cPKw

While the director of comms for NHS Providers thought the news could be a joke:

It's been a big week, my eyes hurt - that can be the only explanation for words: George, Osborne, Editor, Evening standard - being together

However, there were those who thought the move could be a shrewd one:

Heated backlash on new @EveningStandard editor. Paper in superb shape under @mrevgenylebedev. @George_Osborne could be an inspired choice.

Even the (Labour) Mayor of London gave it the thumbs up:

Congratulations to @George_Osborne - the new editor of the @EveningStandard. Covering the world's greatest city #LondonIsOpen

And there were those who wondered how the traditional hack/flack dynamic would pan out:

Finally, in an even bigger shock, the former leader of the opposition tweeted that he will soon be taking up a similar position in publishing:

Breaking: I will shortly be announced as editor of Heat magazine....