Cosmetics giant Avon, one of several official partners of IWD, held an event on Monday in London to discuss research it had conducted with the domestic violence charity Refuge on abusive relationships. It heard from victims of controlling or abusive relationships, and from the CEOs of both the charity and Avon itself.

Avon's corporate foundation the Avon Foundation for Women also announced on Monday that it would donate £250,000 ($304,000) to the charity.

In the US, the foundation said it would make $500,000 (£410,000) in grants to 32 local non-profit organisations who support the safety and empowerment of women and families across the US. The company claims in a press release to be one of the "largest corporate supporters of the cause in the United States".

Eight female stars of the screen, stage and music worlds have lent their voices to a campaign film for the charity ActionAid. The video features Emilia Fox, Emily Watson, Charlie Webster, Lucy Rose, Frances Barber, Tanya Burr, Gabriella Wilde and Sophie Cookson, talking about the ActionAid pledge to support women and girls in some of the poorest parts of the world.

ActionAid UK CEO Girish Menon said: "We know from our work on the ground building coalitions across borders that we are stronger when we come together. We are grateful to these amazing women who have lent their voices to this film and we hope that people will share this message to ensure women’s voices are heard in the global struggle for equality."

Two years since announcing a worldwide minimum level of maternity pay, the telecoms group - another IWD partner - has publicised a new scheme to increase opportunities for women in the workplace. Under the ReConnect programme, up to 500 women on career breaks will be recruited into management roles over the next three years, the company said, accounting for around 10 per cent of all Vodafone external management hires over that period. Vodafone will also recruit up to 500 women on career breaks into a range of frontline roles.

The announcement was sent on Friday last week and was covered widely in the media. To support the initiative, Vodafone produced this video showing the untapped pool of women on a career break:

A total of 43 stock exchanges around the world are taking part in the Ring the Bell for Gender Equality scheme this week, where they will be ringing their opening or closing bells to mark IWD. The aim is to raise awareness about the opportunities for the private sector to advance gender equality and sustainable development, according to The World Federation of Exchanges, which is one group behind the initiative.

The third Ring the Bell event series, themed Women at Work this year, will highlight the role of women, and the opportunity for business. Participants are encouraged to make commitments to improve gender equality in their markets, such as signing the Women’s Empowerment Principles to improve diversity in senior management and on the board, developing more gender-friendly policies, developing a gender-themed investment product, or improving transparency on gender policies and practices.

The activities also coincide with a report entitled How Stock Exchanges Can Advance Gender Equality.

The US-based owner of PR agencies Ketchum, FleishmanHillard and Porter Novelli is promoting its commitment to employing women in senior roles in the UK. The group said its UK senior management teams comprise on average 48 per cent women, against the industry average of 30.2 per cent and ahead of the Institute of Practitioners in Advertising’s target of 40 per cent by 2020.

The figures coincide with the Third Annual Omniwomen UK Leadership Summit, which is part of the Omniwomen initiative designed to increase the influence and number of women leaders across the network. Since the launch of Omniwomen UK in 2015, female representation in senior management across Omnicom companies has grown from 40 per cent two years ago.

Money transfer service Western Union, another partner of International Women's Day, puts its focus on education. Its charity the Western Union Foundation has today launched a $250,000 (£206,000) global scholarship programme providing financial support to students around the world, and has also released a video on inspiring girls and women to take the opportunities provided to them via education. The video also links to its CSR initiative Chain of Betters.

Director of comms Liesl Smith said: "We must all work harder to achieve better pay, better promotions and better support for women and girls. We can play our role in the PR and communications industry, ensuring women get that all important voice at the top table, whether that’s in agencies or in-house."

Actress and model Lily Cole (pictured below) has left a message of support for International Women's Day at an art installation on London's Southbank. The interactive installation has been created by artists Charlotte and Philbert Colbert to "encourage passers-by to spread the female love today", according to Tinder's UK agency Rebecca Abigail PR. 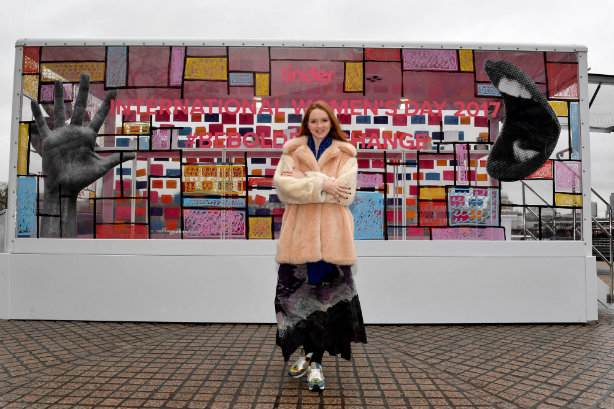 Here is how other brands, organisations and campaign groups have been marking IWD on social media:

Strong on our own, even stronger together. Happy #InternationalWomensDay to all women around the world. pic.twitter.com/ADrTreumdd

This #InternationalWomensDay we want to thank all the women that make this planet a better place. #BeBoldForChange pic.twitter.com/4r0X3Fq3Pq

4,900 remarkable women make us fly every day - this is our thank you. Which woman inspires you? #InternationalWomensDay ?? ? pic.twitter.com/TCVMZ8XRHR

We are proud to celebrate our women employees forming 44% of Emirates’ workforce https://t.co/6u07Nu58dy #InternationalWomensDay pic.twitter.com/kPIBlAHlb9

Meanwhile, there was some criticism for organisations that used IWD explicitly as a marketing tool:

When @TicketmasterUK uses #InternationalWomensDay to sell tickets for events that ft. women. Let's not confuse 'equality' with 'marketing'. pic.twitter.com/J7i4yMWqpm