Power Book members voted Sir Philip Green as the individual or organisation that managed their reputation most poorly in the past 12 months. Meanwhile, President Trump was easily the most popular answer when asked who did so most adeptly.

Forty-nine Power Book chiefs went for retail magnate Green as the worst PR performer. Green was in hot water last year over the collapse of BHS and did his reputation no favours with prickly appearances in front of MPs. Threatening to throw a press photographer’s camera in the sea probably didn’t help either.

Second was beleaguered train company Southern Railway (26 votes), followed by Jeremy Corbyn’s Labour Party, on 22 votes (or 28 if votes for Corbyn himself are added to the total).

Other popular (and not surprising) choices included another corporate big beast, Mike Ashley of Sports Direct (16 votes), and the Remain campaign (15 votes).

Among corporations, there were votes for Samsung (11) and Volkswagen (nine), both of which have suffered recent crises. Five people chose Sam Allardyce, whose reign as England football manager was cut short after a newspaper sting.

Given what happened in the US in November, it’s little surprise to see Hillary Clinton high on the list, with 18 votes. Interestingly, that’s only one more than Trump – who was easily the most popular choice when respondents were asked to identify their top PR performer.

Fresh from his startling election victory, 55 Power Book entrants chose ‘The Donald’ in that category, more than three times the number that went for the second choice, our own political leader, Theresa May.

Politics dominated the top five, with UKIP’s Nigel Farage and recently elected London Mayor Sadiq Khan on ten and nine votes respectively. Ahead of both Farage and Khan was Michelle Obama, who was credited with acting with style and humanity (she received eight more votes than her husband, incidentally).

There was much less agreement about the top PR performer – with 108 different answers received for that question.

The Royal Family deserves an honourable mention. Three people chose the institution as their top PR performer of the year, while Prince Harry received eight votes and Prince William two.

Which organisation or individual has managed reputation most poorly over the past 12 months? 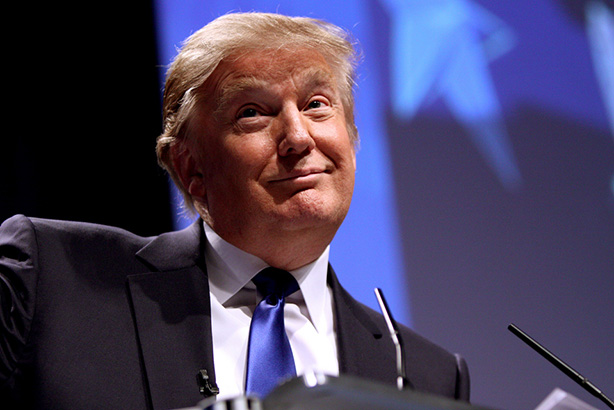 Has Donald Trump managed his reputation poorly or adeptly in the past year? (©Gage Skidmore, via Flickr)

...and which most adeptly?