The fallout from Brexit and the US presidential election has dominated the news cycle for the past eight months and has depressed recall of business stories. In the four months before the EU Referendum, six business stories punched above 30% recall level. During the eight months after June, only two business stories were noticed by more than 30% of the population: the Government’s surprise decision to delay EDF’s nuclear build at Hinkley Point and the ‘Marmite-gate’ spat between Tesco and Unilever. 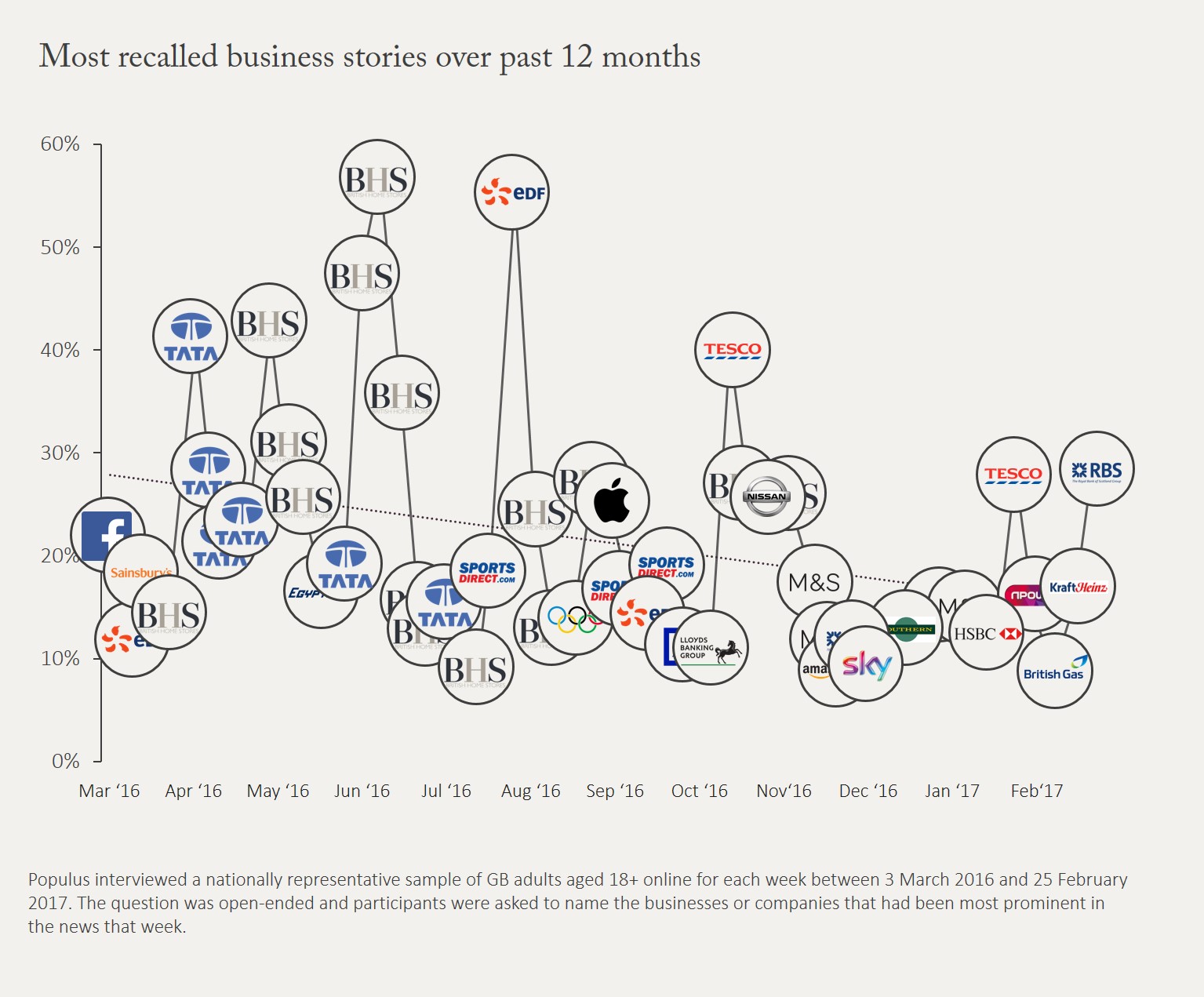 What does this mean for businesses? As in most cases, it’s both a challenge and an opportunity. For those with bad news on the horizon, it is an opportunity to see this go largely unnoticed by the public. For those trying to improve their reputations, it is a challenge to engage people when they are trying to grasp some kind of certainty in an uncertain world beset by Trump tweets and Brexit bluster.

In February Britons noticed two business stories more than any others. 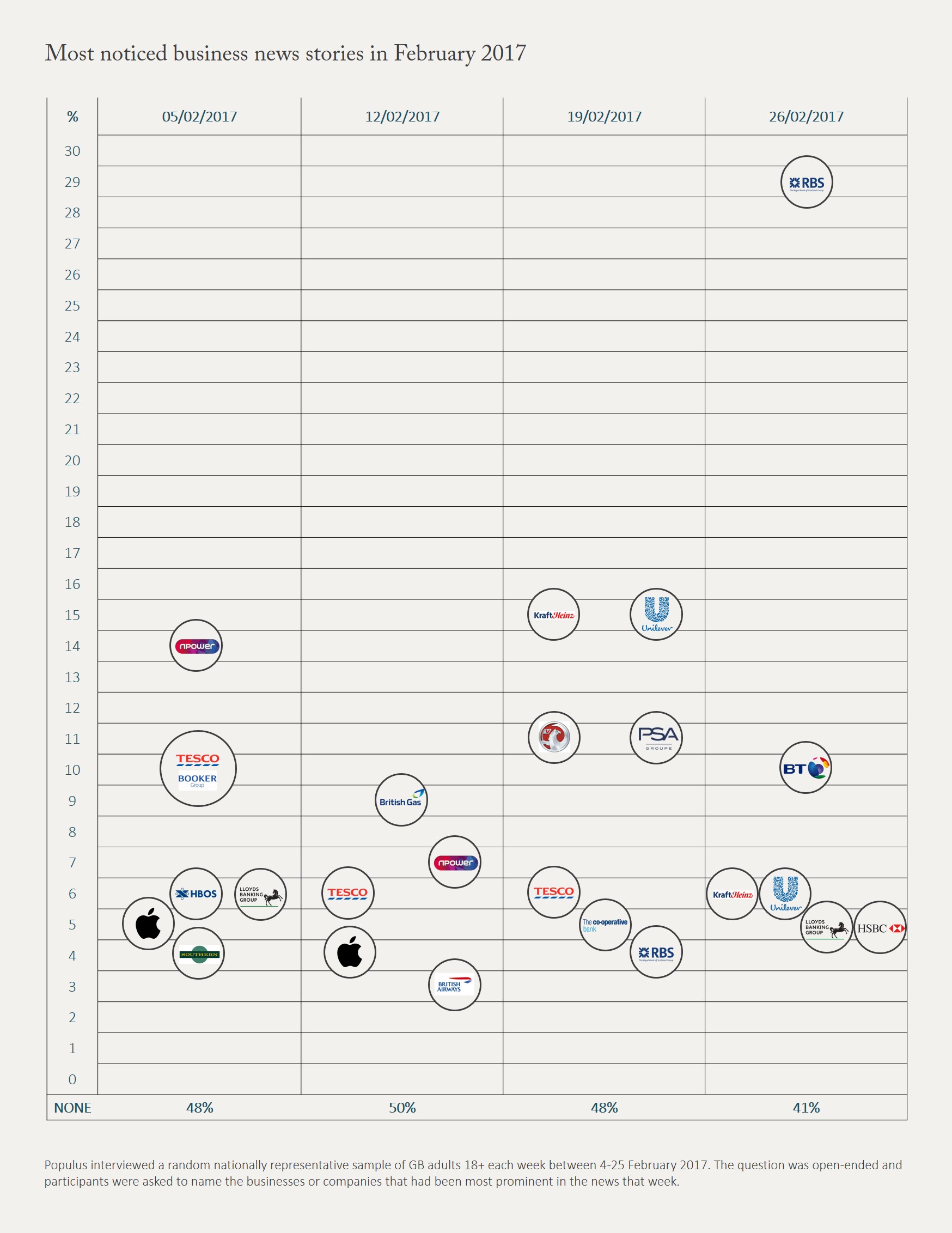 What does ‘no deal’ mean for Unilever?

In mid-February, food giant Kraft Heinz tried to buy Unilever. The deal, worth £115bn, collapsed within days. It would have been the second biggest takeover in history, but it foundered primarily because of corporate culture clash.

Yes, Kraft Heinz’s offer was low, but the market was licking its lips in anticipation of a better bid. Many familiar with the modus operandi of Kraft Heinz’s private equity backer 3G expected the initial offer to be rebuffed by Unilever, but to be accepted eventually after a series of improved offers. This approach had been taken in previous big deals backed by 3G, including InBev/Anheuser Busch and Kraft/Heinz.

This time, it didn’t work because the approach to business used by Unilever could not be more different than that used by 3G. While Unilever believes that nurturing brands and social responsibility is the key to long-term growth, 3G focuses on cost-cutting. Unilever’s acquisition and restructure of Ben & Jerry’s, while retaining the essential elements of its brand and operational culture, is studied in almost every top business school as best practice. On the other hand, impressive improvements in the productivity and leanness as a result of 3G’s InBev/Anheuser Busch merger have come at the expense of thousands of jobs and neutered corporate culture.

Paul Polman, Unilever’s CEO, who has made a point of telling shareholders that don’t believe in the company’s focus on sustainability to invest elsewhere, was able to brush off Kraft Heinz’s offer this time, but he knows that this is a wake-up call. He has already announced a strategic review, which many expect to include cost-cutting, a sell-off of minor brands, higher dividends, a sale of its spreads business and perhaps even the sale of its entire food business to fund acquisitions in its higher-growth home and personal care division.

This strategic review must make Unilever leaner and deliver better returns for shareholders; it offers protection against further aggressive approaches from Kraft Heinz and others like it. However, as the consumer goods giant reshapes itself for the future, it mustn’t lose its robust reputation for sustainability and social purpose along the way either.

The darkest hour is just before the dawn

RBS is the most noticed business in the news this month. The bank reported a £7bn loss, its ninth consecutive year of losses.

The announcement re-opens deep reputational wounds the bank suffered during and after the financial crisis. Since 2008 it has shed 90,000 jobs, incurred £58bn in losses and been bailed out by the taxpayer with a further £45bn. The bank was involved in mis-selling PPI, manipulating Libor and FOREX and IT failures locking customers out of their accounts.

Now, the bank faces a barrage of lawsuits regarding allegations that it shut down viable businesses and stripped their assets to rebuild its own balance sheet, an estimated $13bn fine for mis-selling toxic mortgages in the US and another unavoidable multi-billion pound loss this year.

Buried in RBS’s results, however, is a hidden gem. The retail banking operation in the UK, now the bank’s core focus, has made a £4bn operating profit. What’s more, this part of the bank has consistently made this level of profit for the last few years. Of course, these profits were swallowed up by one-off misconduct and restructuring charges, but the good news is that once RBS gets through this year, it should be in a position to deliver regular profits and resume dividends. As Ross McEwan, the bank’s chief executive, said despite the latest "terrible loss", the lender is finally "on the turn".

Turning a profit is vital to rebuilding trust. The thousands of loyal RBS employees, who have worked tirelessly from one crisis to the next to prevent the bank from sinking, must keep the faith and wait for the dawn.