SINGAPORE: Communications professionals in Australia and Singapore make the most money in Asia-Pacific, although all markets are seeing lower salary increases than in previous years.

Australia has the highest average salary for senior executives in communications roles at $199,000, followed by Singapore at $151,000, according to the 2017 State of the Industry report from Prospect and PublicAffairsAsia. 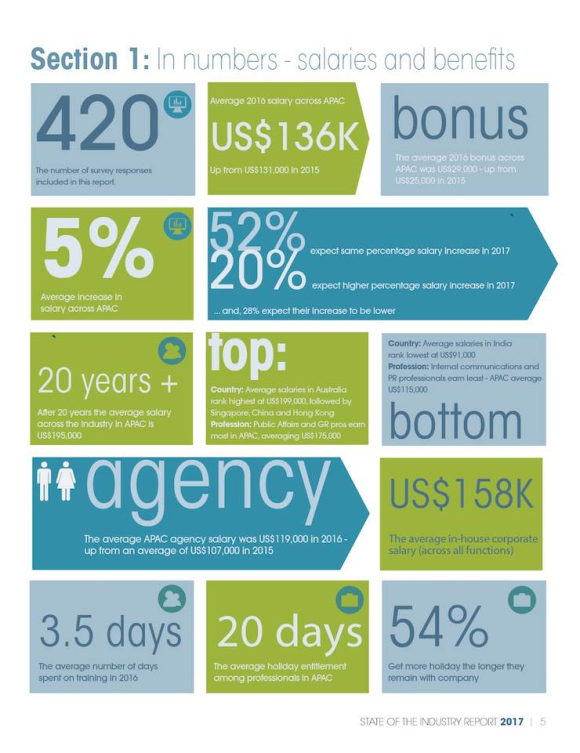 It found that despite tough economic conditions, salaries increased by 5% in the region. However, this rise was lower than in the past two years.

"There are opportunities in the fast-moving digital space, but also concern about budgets, talent retention, and the lack of certain skills," said Emma Dale, Asia MD and cofounder of Prospect. "Despite a challenging economic climate, salaries and bonuses are on the rise, and findings of our 2017 State of the Industry report give grounds for optimism in 2017 for our industry."

The industry has also become more comfortable with flexible working, with a third of all organizations offering it. However, talent remains a significant issue, both hiring and retaining, and is made more complicated by the need for traditional communications skills together with digital and content-curation abilities.

"The growth in digital is by far the biggest industry shift seen in recent years," said Craig Hoy, executive director of PublicAffairsAsia. "It has not, however, supplanted traditional media nor the need for direct public affairs engagement, which remain vitally important. Companies need staff with new skills, such as digital and content curation, but not at the expense of fundamentals such as good writing and credible story-telling capabilities."